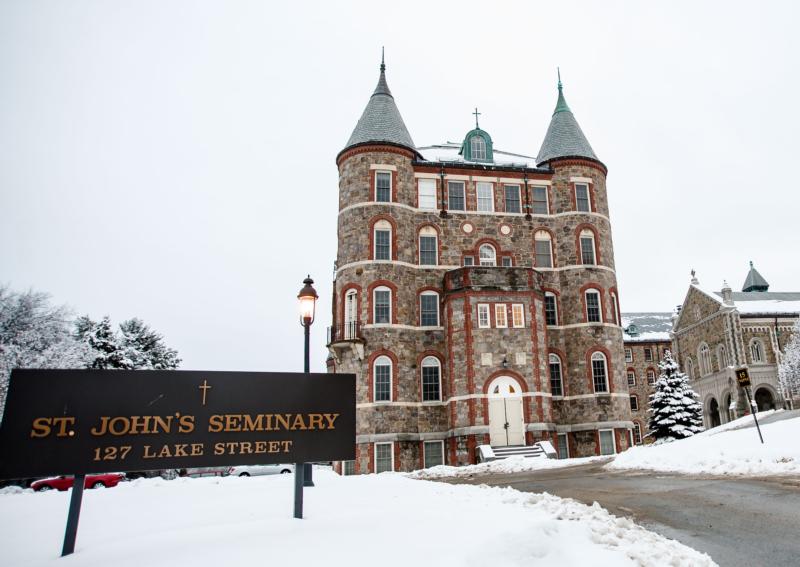 St. John’s Seminary in Braintree, Mass., is seen in this undated photo. An independent inquiry into the Archdiocese of Boston’s seminary has been completed and a report on the results was released Nov. 22, 2019. The inquiry found some internal shortcomings regarding the governance and culture of the seminary, but no evidence of illegal activities or a culture of sexual misconduct by students or faculty members. (CNS photo/Gregory L. Tracy, The Pilot)

BRAINTREE, Mass. (CNS) — An independent inquiry into St. John’s Seminary has been completed, finding some internal shortcomings regarding the governance and culture of the seminary, but no evidence of illegal activities or a culture of sexual misconduct by students or faculty members.

The inquiry began in October 2018 after two former seminarians, John Monaco and Andrew Solkshinitz, published online allegations of “activities incompatible with the proper formation of men for the Catholic priesthood,” such as illicit sexual activity and excessive drinking. Monaco’s open letters to Boston Cardinal Sean P. O’Malley were included in the appendix of the investigation report.

The inquiry was conducted by former U.S. Attorney Donald K. Stern, assisted by the firm Yurko Salvesen & Remz. They interviewed approximately 80 people, including Cardinal O’Malley, priests from the Boston Archdiocese and other dioceses, and current and former seminarians, faculty members, and staff members.

In their report released Nov. 22, the investigators said they “were provided unrestricted access to the records maintained by the seminary” and “received the complete cooperation from both the seminary and the archdiocese.”

The report “largely confirmed” specific allegations made by Monaco, who attended St. Charles Borromeo Seminary and later St. John’s Seminary. However, the inquiry found that these were “isolated incidents” rather than part of a pervasive culture at the seminary, and that these cases were handled “quickly and appropriately.”

No evidence was found of criminal behavior or sexual activity between faculty members and seminarians.

“Contrary to some of the reporting surrounding the 2018 social media postings, the seminary is not a den of sexual misconduct fueled by excessive drinking. Instead, our investigation disclosed only isolated incidents of sexual conduct and alcohol use that are inappropriate in a seminary setting,” the report said.

Among the cases highlighted by the report are a 2014 incident in which two seminarians were expelled for engaging in inappropriate sexual conduct and a 2015 incident in which six seminarians received sexually suggestive texts from an anonymous source that appeared to be connected to the seminary.

It also notes a 2015 “bachelor party” for a staff member at which there was excessive drinking. However, the report said that while the bachelor party “was not the bacchanalian affair sometimes associated with such events, there was undoubtedly a better way for the seminarians to show their appreciation for the staff member.”

The report faults then-rector Msgr. James Moroney, whose “absences from seminary life had a deleterious effect on the seminarians and faculty” and who was “not sufficiently careful with the seminary’s resources,” as well as Father Christopher O’Connor, then vice rector, whom the report said could at times “come across as bullying or intimidating.”

The report called the lack of involvement of the board a “missed opportunity.”

Investigators made several recommendations for the seminary, such as establishing a confidential reporting mechanism, training seminarians and faculty members to recognize signs of grooming, specifying appropriate boundaries, reviewing policies regarding the use of alcohol, improved record-keeping and enhancing the role of the board of trustees in governing the seminary.

Many of the recommended changes were already being implemented by the time of the report’s release.

“New protocols and policies that articulate appropriate boundaries, the indications and potential dangers of grooming, and better control and oversight of the use of alcohol are already in process. The seminary has made great strides in achieving tighter financial controls and overall cost management over the past year and will continue to do so,” interim rector Father Stephen Salocks said.

These recommendations will be shared with other Boston-area seminaries: Pope St. John XXIII National Seminary and Redemptoris Mater Seminary, which also will undergo reviews.

In a statement accompanying the report’s release, Cardinal O’Malley said he was grateful for the “thoughtful and comprehensive efforts” the inquiry team and their candor throughout the process and time given by all who participated in the interviews.

“I am especially grateful,” he said, “to St. John’s Seminary’s leadership, faculty, staff and students who have remained diligent and focused on academic life and priestly formation during the inquiry.”

This story was compiled by staff members of The Pilot, newspaper of the Archdiocese of Boston.

NEXT: Catholic faith means ‘everything’ to vet who survived Battle of Midway