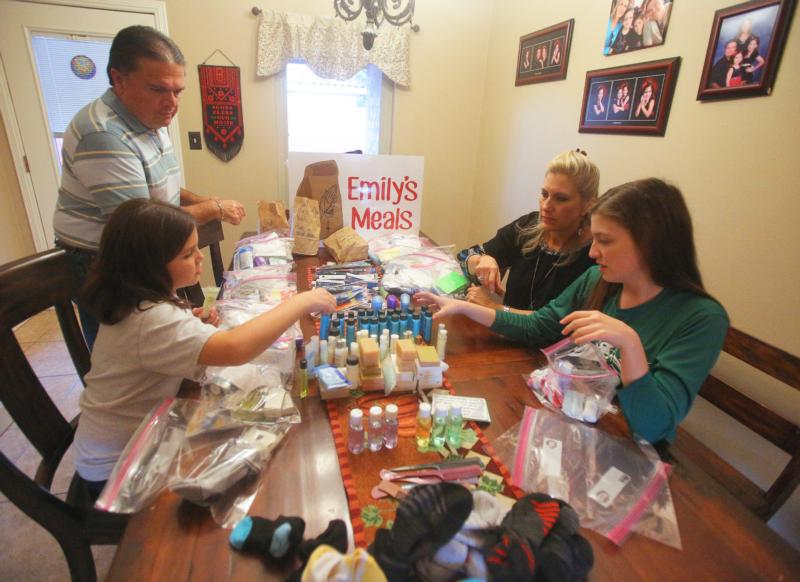 Emily Aguirre, 10, left, her father, Richard, mother Connie and her sister Erica, 15, fill plastic bags with soap shampoo and other items Oct. 7, 2019, at their home to be given to the homeless in McAllen, Texas. It was announced Nov. 1 on ABC’s “Good Morning America” the family was chosen as the first Disney and Points of Light Volunteer Family of the Year. (CNS photo/courtesy The Monitor)

MCALLEN, Texas (CNS) — It started with a child’s concern for a homeless man she saw outside a grocery store.

A stream of questions to her parents followed, and then her insistence on helping in some way. Now Emily’s Meals and teams of volunteers in McAllen every day feed dozens of the homeless they call their friends.

Emily Aguirre, a fifth grader at Our Lady of Sorrows Catholic School in McAllen, was 6 years old in 2015 when she insisted on taking action. So at that time, Emily’s family decided to feed at least one person a day for the 40 days of Lent. As more people learned about their plans, they wanted to join in and help.

This help evolved into an ongoing ministry — Emily’s Meals, and every month teams of volunteers from different faiths, organizations and families sign up for a specific day to drive the streets of McAllen to feed the hungry.

Because of the impact they make on the community, the Aguirre family was named Nov. 1 as the Disney and Points of Light Volunteer Family of the Year. They were one of five finalists for the award, given for the first time this year. The award to the Aguirres was announced live on ABC’s “Good Morning America.” They were nominated by Juan Diego Academy of Mission, Texas.

The Aguirres receive a weeklong vacation at Walt Disney World Resort, where they will be the guests of honor at a super celebration for Family Volunteer Day. Plus, they received $10,000 for Juan Diego Academy and an additional $10,000 for Emily’s Meals.

In an interview with The Valley Catholic, newspaper of the Diocese of Brownsville, Emily talked about what it is like for her to help the homeless and others in need.

“I enjoy seeing their faces light up and their smiles when we give them a meal,” she said. “They are all our brothers and sisters, we are children of God and we are here to make the world a better place.”

Emily learned this lesson in kindergarten, she said, on the day before she saw a homeless person.

“Our teacher taught us not to take anything for granted,” she said. “And after I learned about the homeless, I wanted to help. I wanted to do something.”

Coni Aguirre, Emily’s mother, said, “It has been inspiring to see this small group of people, who in February 2015 made a commitment to feed 40 people a day for the 40 days of Lent grow into the ministry we have today.”

“We haven’t stopped yet, and that’s about 10,000 meals a year!” she said. “The success of Emily’s meals is the individuals, families, churches and businesses that put together meals and deliver them every day of the week. We are so thankful for the people who support this ministry.”

The ministry continues to grow. They now have a trailer with a shower and needed toiletries.

In the summer, they host a picnic for their homeless friends where they provide clothing, shoes, backpacks, pillows and other items that have been donated. This past summer they also had two clinics providing health care, another agency provide mental health care, and Workforce Solutions offer job placement services.

Rick Aguirre, Emily’s father, shared this on the Emily’s Meals Facebook page: “It’s always amazing to see how our homeless friends enter this (picnic) event. Shy and cautious. But when they leave they are all smiles, laughing and giving hugs on the way out. It is a blessing to see our team members sitting down with them and having lunch together, being treated as a human and not someone to avoid. It was a wonderful sight!!!”

Edward Hess, one of the Aguirre family’s friends they met through their ministry, said homeless people have “stumbled and they need help getting up sometimes. And this family — they give you motivation to stay up once you get up. They keep me going every day.”

Because of the help Hess received, he now has a job and gives back to the community by cutting hair for the homeless.

He made the comments in a video that aired in October on “Good Morning America,” when the Aguirres’ nomination for the Disney honor was first announced.

Volunteer Melissa Aramburo said in a post on Emily’s Meals Facebook page that the organization “does more than feed homeless people. They get to know their names, their stories, their hopes and fears, and their needs.”

She detailed many things the organization has done, including providing bus tickets “to an abused homeless mom and her four children so they could return to her home state and get their life back on track” and placing a donated camper in a trailer park “for another homeless person to finally get off the streets and get on his feet.”

The Aguirres’ advice to other families considering getting involved and helping their community? “Start small. It can be as simple and little as a bottle of water. It doesn’t have to be complicated. You don’t have to feed 40 people, start by feeding one person a day. It’s all about making a difference in someone’s life.”

Riojas is editor of The Valley Catholic, newspaper of the Diocese of Brownsville.

NEXT: Teen spends final days reaching out to vulnerable, poor on city streets