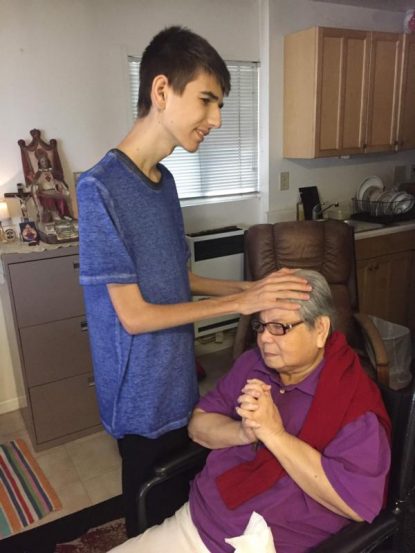 Nicholas Peters, suffering from terminal cancer, lays hands on a woman named “Frisca,” a homebound parishioner of St. Charles Parish in San Carlos, Calif. The teenager spent the last six months of his life ministering to the homeless or homebound at soup kitchens and homeless encampments. The Society of St. Vincent de Paul of San Mateo County renamed its youth award after Nicholas, who died in July of cancer at age 19. (CNS photo/courtesy family of Nicholas Peters)

SAN FRANCISCO (CNS) — When 19-year-old Nicholas Peters of San Carlos understood that his life would not be a long one, he decided to spend the days that might be left to him ministering to the forgotten and the hopeless on the streets of San Francisco.

“Nicholas’ biggest mission was spreading God’s word and giving dignity to the homeless,” his mother, Becky Peters, said in a message she delivered at the Society of St. Vincent de Paul of San Mateo County’s annual awards luncheon in September.

The organization recognized Nicholas’ legacy of Christian love by renaming its youth service award the Nicholas J. Peters Ozanam Spirit Award. The award, which recognizes service to the poor and needy by youth, pays tribute to Frederic Ozanam, a French university student who in 1833 founded the Society of St. Vincent de Paul to confront the dire poverty he saw on the streets of Paris.

From January to July of this year, when Nicholas succumbed to the liver cancer he was diagnosed with at age 16, Peters said her son spent up to 40 hours a week or more with the homeless or homebound, volunteering at soup kitchens, homeless encampments and senior centers.

When he felt he had still more to offer, she said, he would head to the urban parks nearby afterward with soup-kitchen leftovers.

Nicholas’ reading of the Bible cover to cover 15 times over the course of his treatment, combined with the constant presence of an adult companion, Mel, hired by the family, gave the young the man the spiritual and organizational support to make his mission possible.

Nicholas and Mel headed out each day to “bring food and God” to those in need of both.

“He had no time left, but all the time in the world” to be a presence to the vulnerable and the poor, Peters said.

“I will never forget the morning I came into Nick’s room and he looked at me with the biggest smile on his face,” she said. “He told me he had the best sleep he ever had because he knew that a homeless man named Joseph was warm, safe and dry.”

Nicholas and Mel had found a motel room for Joseph for the night. He spent the next week working on a resume for Joseph.

And then there was Anabel, a homeless mother who had lost custody of her child because of drug abuse and told Nicholas that she was convinced God didn’t love her anymore.

“After Nick assured (her) of God’s love, she returned home to her parents’ home and began recovery,” Peters said.

Jennifer Kau, a registered nurse at Lucile Packard Children’s Hospital at Stanford University, where Nicholas was treated, wrote him a letter to express how his loving courage had “changed me forever.”

“Nicholas, without ever intending to,” she wrote, “you have taught me that the measure of who we are lies in the person we choose to be as we face our darkest days.”