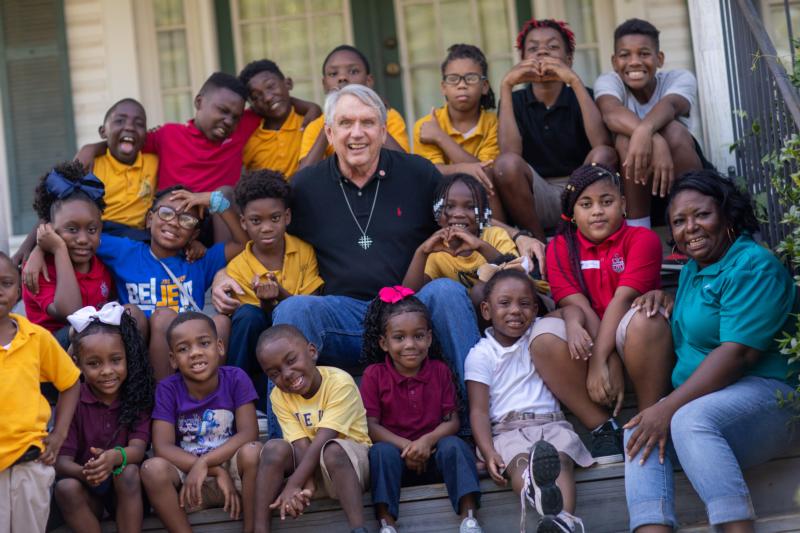 Latin for the “Light of Christ,” Lumen Christi Award recipients are hidden heroes in our midst, bringing light and hope to the forgotten corners of our country.

McCarter, founder and coordinator of Community Renewal International, believes what people share in common is a God-given capacity to care for one another and be cared for and he has spent a lifetime uniting and transforming communities.

He started the organization in 1994 with one goal in mind: to rebuild his hometown of Shreveport by uniting individuals, churches, businesses and civic groups. He was nominated for the Lumen Christi Award by the Diocese of Shreveport.

The diocese, Catholic Extension and Community Renewal International hosted the celebratory dinner in Shreveport for McCarter and CRI’s 25th anniversary.

The Lumen Christi Award is the highest honor Catholic Extension bestows on a missionary working in the United States. It honors an individual or group working in one of America’s mission dioceses “who demonstrates how the power of faith can transform lives and communities.”

After serving as a pastor in Texas for 18 years, McCarter returned to Shreveport and discovered many neighborhoods that were once vital and thriving were in great decline. They were facing gangs, drugs, violence, crumbling homes and people living in isolation. It was heartbreaking, but he knew the situation could be healed. McCarter set out to resurrect the foundation of relationships and create compassionate neighborhoods.

For 25 years, McCarter and his organization have shattered the barriers of indifference by bringing individuals together in heart and deed for the betterment of community.

Community Renewal International’s model is driven by three primary initiatives and ministries — the Renewal Team, the Haven House, and the Friendship House. CRI volunteers build homes, host after-school and adult literacy programs, and unite neighborhoods by placing “We Care” signs in their yards and bumper stickers on their cars.

“We’re not going to make caring people — they’re already caring,” McCarter said. “We’re just going to begin to make them visible and be the biggest gang in town.”

With his team consisting of more than 50,000 people, Community Renewal International is not just the biggest gang in town, but is having the biggest impact.

McCarter’s leadership has transformed the Shreveport area and has spread to other cities in the nation and across the globe.

Said Father Wall: “When we bring people together in good faith, good things happen, communities are transformed, and they change the world around them. That is exactly what Mack has done and that’s why he is our 2019-2020 Lumen Christi Award recipient.”

As the Lumen Christi Award recipient, McCarter and the Diocese of Shreveport will share in a $50,000 grant to be used for enhancing a specific area of ministry.

Catholic Extension raises and distributes funds to support U.S. mission dioceses, many of which are rural, cover a large geographic area, and have limited personnel and pastoral resources. It has been supporting the work and ministries of these mission dioceses since its founding in 1905.

PREVIOUS: Nicaraguans in U.S. call on world to open eyes to country’s plight