Nicaraguans in U.S. call on world to open eyes to country’s plight 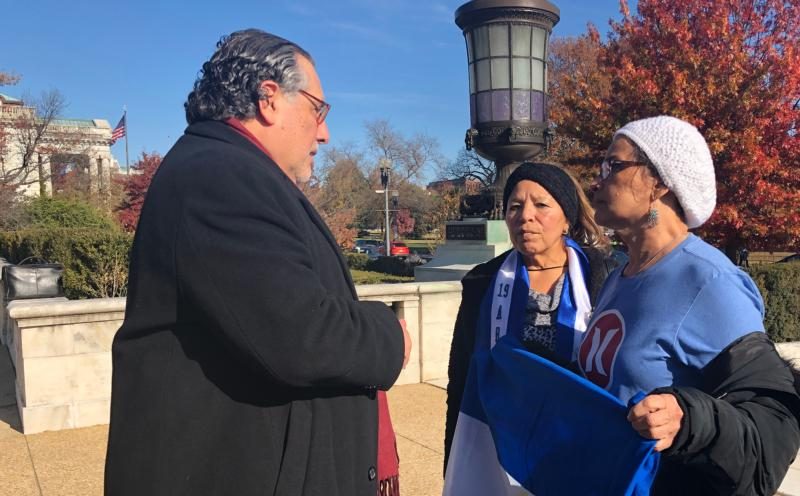 Estela Callejas, right, and Romy Rojas speak with Mario Arana, president of the American Nicaraguan Chamber of Commerce, outside the Organization of American States in Washington Nov. 25, 2019. Arana is involved in negotiations trying to find a peaceful solution to the volatile political situation in Nicaragua. (CNS photo/Rhina Guidos)

WASHINGTON (CNS) — Outside the Organization of American States in Washington Nov. 25, Estela Callejas and Romy Rojas pleaded with the man in the suit for help.

“We’re tired. We’ve been here in the rain, cold and snow … the business sector has got to step in and put pressure,” Callejas said in Spanish, as she and Rojas pleaded with Mario Arana, president of the American Nicaraguan Chamber of Commerce, outside the OAS, as he headed inside the building to continue negotiations trying to find a peaceful solution to the volatile political situation in Nicaragua.

“Take our voice inside there,” Rojas said to Arana.

The women, Nicaraguans living in the U.S., were outside on one of Washington’s busiest streets, near the White House, holding signs and calling attention to what they said was a violation of human rights, including the right to protest, expression, and even to gather for worship taking place in Nicaragua, where government supporters have, of late, been accused of attacking crowds inside Catholic churches.

That’s where some anti-government protesters have gathered, including a group of mothers with sons detained for political reasons by the administration of President Daniel Ortega Saavedra, who seems intent on holding on to power.

Opposition against Ortega and his wife, Rosario Murillo, who doubles as first lady and vice president of the nation, has been rising since April 2018, when their government announced an austerity plan to reduce pensions as a cost-cutting measure while increasing employee contributions to the social security system.

The plan didn’t go over well, and even though the government rescinded the proposal, massive protests began, leading to hundreds of deaths and thousands of injuries after police and pro-government forces clashed with civilians.

Following the bloodshed, the country’s Catholic bishops attempted to dialogue with the government.

The Ortega administration and its supporters, however, intensified the clampdown. One of the country’s prelates, Managua Auxiliary Bishop Silvio Baez was physically attacked by pro-government groups for speaking out against the Ortega administration and left the country in April headed for Rome but his destination was unclear. Many suspect he left because of credible death threats.

“To carry the flag, it’s a crime. To go into a (Catholic) church, it’s a crime,” Callejas, who lives in Silver Spring, Maryland, told Catholic News Service Nov. 25. “We’re here to support the exit of a dictator and we’re tired. We want the world know the situation and we want them to support us.”

Callejas, who described herself as a member of the Neocatechumenal Way, said she wanted to call Catholics’ attention to what’s been happening inside churches in Nicaragua, including recent attacks on and around Nov. 21 in the capital of Managua and the nearby city of Masaya, where Catholics were forced to barricade doors as a mob tried to enter, and where a church was taken over by pro-government groups, leaving trapped inside its pastor, a nun and a group of women on a hunger strike demanding the release of their sons.

“We want solidarity with our people as they go through this horrible situation from a repressive, assassinating government,” Rojas, a Nicaraguan living in Virginia, told CNS outside the OAS building. “We will not rest. The message against Ortega is clear.”

That message is for Ortega to leave, she said.

As a Catholic, she said she was concerned about the violence taking place inside places of worship, “but we know the church will persevere.”

Almost since the conflict began, the Washington-based OAS, an organization of 35 independent states in North, Central and South America, have been trying to broker a peaceful solution to no avail.

“I promise you, I will keep insisting,” negotiator Arana told the women outside the building, as he headed to a meeting where the body was set to hear the report of a High Level Commission on Nicaragua.

Even after OAS General Secretary Luis Almagro called for Nicaragua’s civil and political freedoms to be restored, and for the return of peace and justice, the country’s representative rejected during the meeting the assertions of repression.

“We reiterate the official position of the Nicaraguan government to consider the so-called OAS High Level Commission as nonexistent,” said Ruth Tapia, the country’s ambassador. “Therefore, something that does not exist cannot produce reports or opinions, much less recommendations or impositions.”

But even the U.S. Department of State publicly criticized what had happened inside one of the Catholic churches.

“The Ortega regime’s siege of a place of worship is unacceptable, as are the arrests of more than a dozen individuals who were attempting to aid the hunger strikers,” said Morgan Ortagus, spokesperson for the State Department, in a Nov. 21 statement about those who were trapped inside the church in Masaya.

Patricia Ramirez, a Nicaraguan who lives in Arlington, Virginia, and was with the group outside the OAS, said that without the church, there is very little support or protection for those inside the country. Rojas, was nearby said that if the priests were protecting people inside the church, that’s what they are called to do and it’s not a crime, she said.

Ramirez said she would continue to participate in any demonstrations to pressure the U.S. and anyone to help her native Nicaragua because if those outside didn’t try to call attention to the problem, “there is no hope for those inside.”

“We’re their voice,” she said.

Catholic organizations, including the Ignatian Solidarity Network, along with other Jesuit-affiliated groups, and various bishops’ conferences in Latin America, also have called for something to be done.

In a Nov. 25 statement, the Ignatian network urged the U.S. government to support the people of Nicaragua.