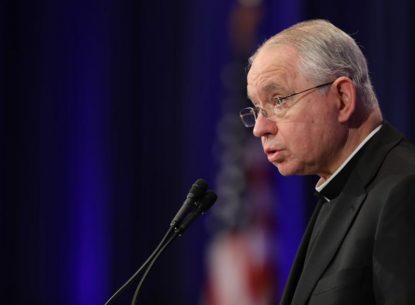 These failures date back to 1986, he said, which was the last time Congress passed immigration reform.

Ahead of the oral arguments on the Deferred Action for Childhood Arrivals taking place Nov. 12 at the U.S. Supreme Court, Archbishop Gomez said there are “no doubt” constitutional and legal questions “raised by DACA and how it was enacted.”

“But we need to be clear: The fate of these young adults should never have been in the courts in the first place,” the archbishop wrote in a column Nov. 6 column in the Angelus, online news outlet of the Los Angeles Archdiocese. “And it would not be, if our leaders in Washington would simply set aside their political interests and come together to fix our nation’s broken immigration system.”

DACA was established by President Barack Obama’s executive order in 2012, and President Donald Trump ordered an end to the program in 2017. Several legal challenges to this order have resulted in a consolidation of three DACA cases now before the high court.

“Our nation made a promise to these ‘Dreamers,'” Archbishop Gomez wrote. “We have a moral obligation. It is time for the president and Congress to honor that promise and live up to this obligation.”

Established by President Barack Obama’s executive order in 2012, DACA provides protections from deportation and work permits for undocumented immigrants who are under age 36 and have no serious criminal record.

No doubt there are constitutional and legal questions raised by DACA and how it was enacted. But we need to be clear: The fate of these young adults should never have been in the courts in the first place. And it would not be, if our leaders in Washington would simply set aside their political interests and come together to fix our nation’s broken immigration system.

Washington’s failures cut across party lines and date back to 1986, the last time Congress made comprehensive reforms to immigration policy.

What is important now is for this president and this Congress to do something about DACA.

In this great country, we should not have young people living under the threat of deportation, their lives dependent on the outcome of a court case. The issues at stake are legal, but they are also humanitarian, economic, and moral.

The 800,000 current DACA beneficiaries are among an estimated 1.8 million “Dreamers,” young adults brought to this country by undocumented family members when they were small children.

By now, these young people are grown up and are deeply integrated into our social fabric — studying in universities and colleges, serving in the police and military, working in hi-tech fields and hospitals; some are even preparing for the priesthood and religious life.

Using the promises of DACA, they are working hard to contribute to the American dream. More than 95% have jobs, about 5% have started their own businesses, and nearly 15% own homes.

Business leaders from every sector of the economy say these young adults are vital to our nation’s economic future; already, they are contributing billions each year in tax revenues and income.

This contribution is especially important at a time when 10,000 baby boomers, those born between 1946 and 1964, are reaching retirement age every day.

Americans have never been a people who punish children for their parents’ mistakes. And despite the polarization of our politics, we know in our hearts it is not right to hold these young people accountable for decisions about their lives that they did not make.

America is their home, the only country they have ever known. They are “Americans” in every respect except their legal status. If we deport them, in many cases we will be sending them back to countries they do not remember and have not seen since they were infants or toddlers.

The Supreme Court is expected to rule on the DACA cases in late June, just a few months before the 2020 elections.

Congress and the president should take responsibility and act now, and everyone should resist the temptation to make this a campaign issue.

There is broad bipartisan public support for DACA, not only among ordinary Americans but among corporate, civic, and religious leaders.

And there has been broad sympathy and support for helping these young people among our leaders in Washington.

In addition to Obama’s executive order on DACA, many members of the House and Senate have backed legislation that would make the DACA protections permanent. Trump in 2018 also proposed to provide a permanent legal status and a path to citizenship for the 1.8 million who are DACA-eligible.

A simple, sensible, and humane solution does exist: Provide a path to legalization and citizenship for those eligible for DACA, and at the same time enact meaningful measures to strengthen border security.

It is true, there are many other issues that need to be addressed to fix our broken immigration system. But it is not right to keep these young adults living in a kind of legal limbo until all the other more complex and contentious issues are resolved.

Our nation made a promise to these “Dreamers.” We have a moral obligation. It is time for the president and Congress to honor that promise and live up to this obligation.

Pray for me this week, and I will be praying for you.