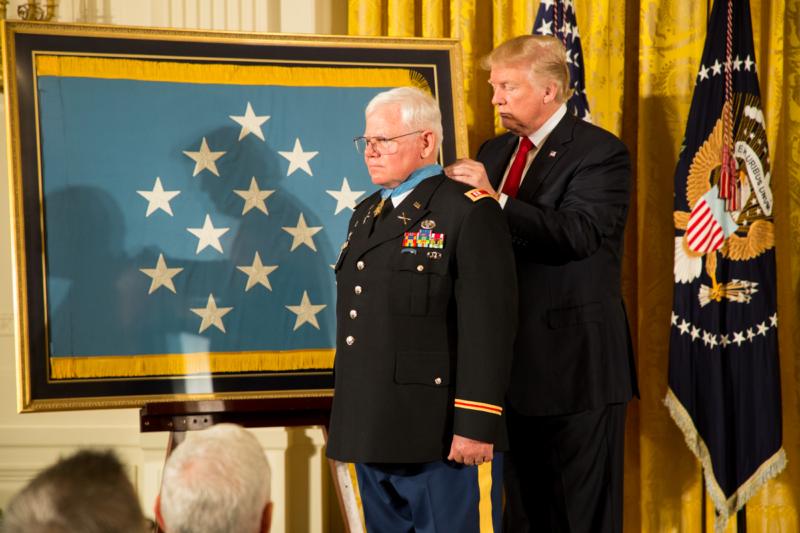 Gary Rose, an Army medic during the Vietnam War, receives the Medal of Honor Oct. 23, 2017, from President Donald Trump at the White House. Rose retired as a captain in 1987. (CNS photo/Shealah Craighead, Official White House Photo)

Sgt. Gary Rose looked out and saw a wounded soldier 50 meters outside his company’s perimeter, stranded in the middle of North Vietnamese Army machine gun fire during a Vietnam War Special Forces mission in Laos.

It was day two of Operation Tailwind — a Special Forces mission to disrupt the enemy army’s operations in southeastern Laos during the Vietnam War. Sixteen American and nearly 120 Montagnard soldiers dropped deep into enemy-controlled territory from Sept. 11-14, 1970. Rose was their medic.

He had to act quickly. He scrambled, avoiding enemy fire to reach the wounded man and then, shielding him with his own body, provided medical treatment. With one hand, he dragged the wounded Montagnard, using the other to fire his weapon at the attacking North Vietnamese Army, or NVA.

As he entered the perimeter, a rocket-propelled grenade exploded, shredding Rose’s foot.

“A hole in your foot, a hole in your arm, as long as you could function was not considered serious,” Rose said.

He spent the rest of the operation using a stick as a crutch. Over the course of four days, Rose treated and saved 60 wounded soldiers. His heroics that day went largely unremembered for 47 years — until he received the Medal of Honor at a White House ceremony Oct. 23, 2017.

Rose said he hardly remembers the actions witnesses attribute to him during Operation Tailwind. But he remembers the times death nearly took him. 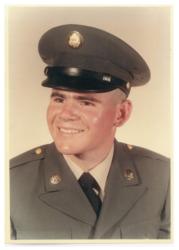 Gary Rose, a medic, is seen in this 1967 U.S. Army portrait. He retired as a captain in 1987. (CNS photo/courtesy Knights of Columbus)

By day four of the operation, in what Rose described as a 96-hour day, the Special Forces depleted their ammunition as NVA troops continued their onslaught. Evacuation helicopters were called in to extract the company. Rose helped the wounded board the helicopters, then returned to the outer defensive perimeter to help repel the assault. He boarded the last helicopter out.

“I said to the first sergeant, ‘You know, Top, if this thing goes down, I’m walking back,'” Rose remembers saying as he hobbled aboard.

As they lifted off, the helicopter was under sustained enemy fire. A Marine door gunner was shot through the neck. Rose stopped the bleeding, saving his life. But then, Rose was thrown from the helicopter just before it crashed.

The helicopter was smoking and leaking fuel. Rose’s comrades were trapped, wounded and some unconscious. Rose crawled in and out of the wreckage, pulling his brothers away from the danger while administrating life-saving aid until another chopper came to bring them back to base.

Upon returning to base, Rose refused treatment before others. Three men lost their lives.

“I’ve been told by everybody that’s analyzed this from one end to the other that none of us should have made it out of there,” Rose said. “When I think about those four days, I don’t see how you could survive something like that without somebody deciding it was not your time to go.”

Rose continued his career in the Army before retiring as a captain in 1987. He later worked as a technical consultant in the defense and automobile industries.

Rose now spends his time working with multiple charitable organizations, including the Knights of Columbus. He joined the Knights while serving in Panama in 1973. He currently lives in Huntsville, Alabama, volunteering with Good Shepherd Council 11672 in their fundraisers for people with physical and intellectual disabilities as well as the council’s initiatives sponsoring education.

“You can’t fix the country, you can’t fix the state, you can’t even fix your city, but you can do something about your neighborhood, the block in which you live in, and the little local community. And the Knights of Columbus provide the means to do that,” he said.

NEXT: Gomez: Nation has ‘moral obligation’ to keep promise to DACA recipients