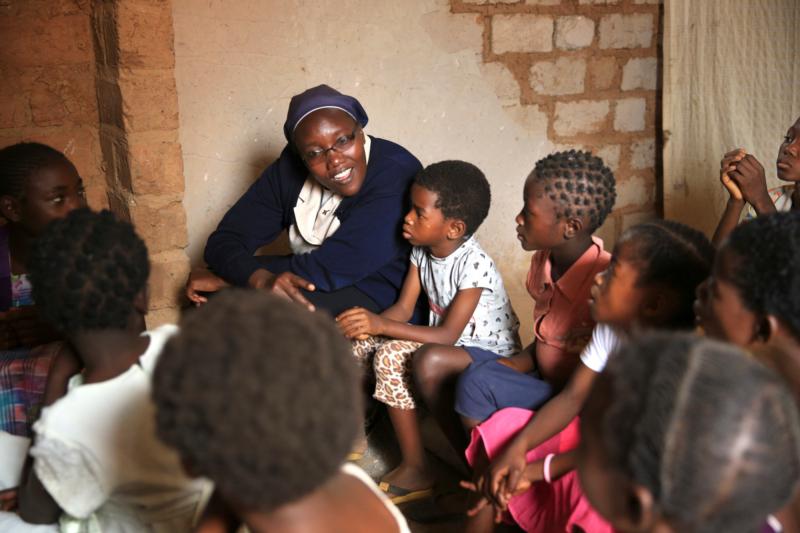 Sister Catherine Mutindi, founder of Bon Pasteur in Congo, is seen in an undated photo talking with children. Sister Mutindi, a member of Our Lady if Charity of the Good Shepherd, has been awarded the 16th annual Opus Prize, given annually to a leader in faith-based humanitarian work. (CNS photo/courtesy Opus Prize Foundation)

St. Louis University and the Opus Prize Foundation bestowed the award on the Good Shepherd sister Nov. 21 at the Jesuit-run university’s Center for Global Citizenship.

“Sister Catherine is working to address modern-day slavery, in children as young as 4 and 5, working in highly toxic cobalt mines, to earn enough to feed their families that day,” said Don Neureuther, director of the Opus Prize Foundation.

“In a relatively short period, she has transformed the lives of 3,000 children and countless adults, and literally restored their humanity,” he said in a statement. “She gives them hope.”

Sister Mutindi’s religious order, the Sisters of Our Lady of Charity of the Good Shepherd, is an international congregation with sisters in 73 countries. The order is known for its ministries protecting and empowering adolescent girls, women, children at risk and victims of human rights violations, including trafficking and sexual exploitation.

In 2012, Sister Mutindi started Bon Pasteur after being invited by the local bishop to come to the city of Kolwezi to work with widows and orphans. She first listened to the community and within 10 months developed a five-year plan which focused on addressing alternative livelihoods to mining, including farming.

She tackled gender violence and the physical abuse of children; child protection policies and schooling for children; and “civic strengthening” to address the “gold rush” environment of the mining entities.

Bon Pasteur’s work has been recognized by the Congolese government and numerous leading nongovernmental organizations, including Amnesty International as the only NGO “working effectively” to address the widespread human rights abuses against children, adolescent girls and women in Kolwezi’s “ASM communities,” as they are called. ASM stands for “artisanal and small mining.”

“Bon Pasteur’s vision is an inclusive and democratic Congolese society where the rights of girls, women and children are protected and promoted,” said a news release on this year’s Opus Prize winner.

“To realize this vision,” it said, “Bon Pasteur has developed an extensive child protection program, which includes remedial holistic education, psychosocial support, a referral system for abused persons and human rights education, all of which seek to mitigate the phenomenon of worst forms of child labor for orphans and vulnerable children.”

Bon Pasteur’s efforts also have been recognized by the several Congolese national and local government offices as well as the United Nations, UNICEF, the World Bank, World Vision and representatives of numerous international mining companies.

The Opus Prize, awarded each year in partnership with a Catholic university, recognizes faith-based, nonprofit innovation and work. The $1 million award and $100,000 prizes for the other finalists make up one of the world’s largest faith-based awards for social entrepreneurship.

Sister Mutindi was one of three finalists for the award. The other two received $100,000 for their organizations. They are:

— Michael Fernandez-Frey, founder and director of Caras con Causa, an NGO that serves economically poor families in communities bordering the Bay of San Juan, Puerto Rico. Caras con Causa is committed to children’s education, restoring the wetlands after the hurricane and organizing communities to rebuild homes threatened with destruction by the government.

— Brother Charles Nuwagaba, provincial vicar of the Bannakaroli Brothers of St. Charles Lwanga. Brother Nuwagaba oversees a primary school and vocational education program run by his religious community on the edge of the Kibera slum, the largest slum in Nairobi, Kenya, and the largest urban slum in Africa. The primary school currently enrolls 280 students and 260 young people, including teenage mothers who are enrolled in vocational programs, such as motor vehicle maintenance, hairdressing and beauty, hospitality and computer technology.

“Through their shared experiences, our students, faculty and staff have had the opportunity to see how incredibly impactful being men and women for and with others can be,” he added.

NEXT: Knights still honor Kennedy as order’s ‘most distinguished’ member