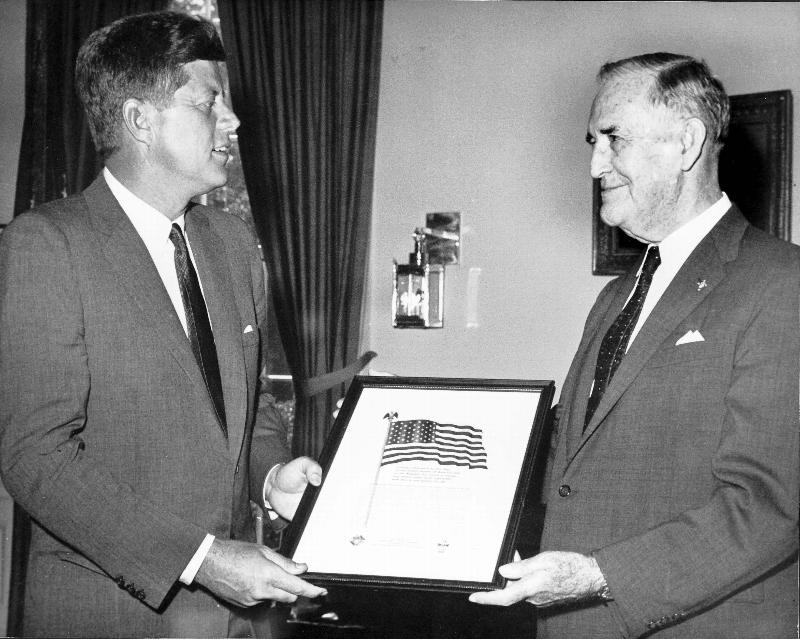 U.S. President John F. Kennedy is seen at the White House Oct. 11, 1961, with Supreme Knight Luke E. Hart of the Knights of Columbus. Kennedy was a member of the Knights’ Bunker Hill Council 62 in Charlestown, Mass., joining on St. Patrick’s Day in 1946. He became a fourth-degree Knight in 1954. Kennedy, the first Catholic to be elected president, was assassinated Nov. 22, 1963. (CNS photo/courtesy Knights of Columbus)

President John F. Kennedy — the first Catholic to be elected commander in chief — had been assassinated.

Grief was immediate among Catholics, including the Knights of Columbus. Knights were “overwhelmed with grief,” noted then-Supreme Knight Luke E. Hart, after the death of their “most distinguished” member.

Kennedy had been a member of the Knights’ Columbus Bunker Hill Council 62 in Charlestown, Massachusetts, joining on St. Patrick’s Day in 1946. He became a fourth-degree Knight in 1954.

In a letter to their Supreme Convention in July 1961, Kennedy praised the Knights’ charity and service, writing that their “countless allied activities all unselfishly offered in the name of our common humanity have served to strengthen and solidify their hold on the public heart.”

But this man — who, according to Hart, “our country has never known his equal” — was now dead. Hart attended the funeral. In fact, he was the only layman seated in the sanctuary at the funeral Mass at St. Matthew’s Cathedral in Washington.

The late president adorned the January 1964 cover of Columbia, a magazine distributed to every member of the Knights of Columbus around the world. Hart praised Kennedy, writing:

“He had faith, education, intelligence, culture, personal charm, wisdom, breadth of vision, human understanding, courage and loyalty to his country and to his God. … But he had not lived in vain. He demonstrated a truth which Catholics have asserted since the founding of the Republic, i.e., that a Catholic might be president of the United States and that a Catholic president would prove to be worthy of that high honor.”

In February 1964, the Knights of Columbus passed a resolution extending their “most heartfelt sympathy” to Kennedy’s family and made a “firm promise” to pray for his soul. Knights continue to this day to fulfill this promise at St. Mary’s Church in New Haven — where the organization was founded — during a daily Mass offered for all deceased members.

The sympathies expressed by the executives at the Knights of Columbus at the time also were expressed by Knights throughout the fraternal order. Knights in British Columbia held living rosary devotions in memory of the late president. Bishop Clement Smith Council 838 in Iowa held a Holy Hour for him. Every council in Maine offered a Mass for their brother Knight, while Knights in California, Kansas and parts of Canada held memorial services for him.

Other Knights of Columbus councils, more than 25 of them, named themselves after John F. Kennedy.

As noted at their Supreme Convention in 1964 held in New Orleans, the Knights of Columbus saw Kennedy as a “Knight who was never a traitor to his conscience, who never abandoned the principles in which he believed nor the people who believed in them.”

NEXT: Teens at NCYC embrace volunteer opportunities, take time to help others