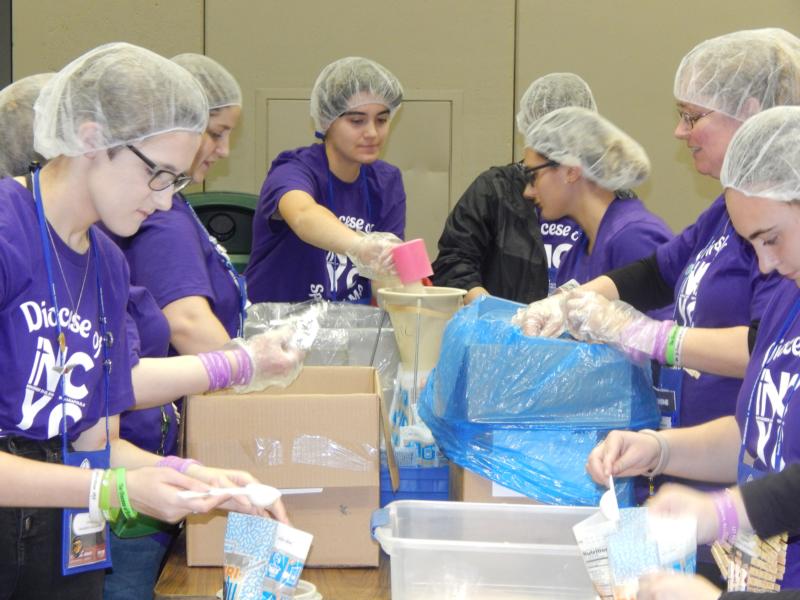 Teenagers from the Diocese of Springfield, Mass., put together meals Nov. 23, 2019, during the National Catholic Youth Conference in Indianapolis. The meals were for Pack Away Hunger, an Indianapolis-based organization that provides nutritious dehydrated meals to local food pantries throughout Indiana. The organization also works with international populations. (CNS photo/Mike Krokos, The Criterion)

INDIANAPOLIS (CNS) — Like many other teenagers, A.J. Terry made sure the time she spent in the thematic park during the National Catholic Youth Conference in Indianapolis also was about helping others.

Terry, a high school freshman who lives in the Diocese of Springfield, Massachusetts, spent several minutes helping put together meals for Pack Away Hunger, an Indianapolis-based organization that provides nutritious dehydrated meals to local food pantries throughout Indiana. The organization also works with international populations.

The meals consist of rice and soy, dehydrated vegetables and a powerful vitamin nutrient pack that goes into it, said Allison Avin, Pack Away Hunger’s director of communications. The meals are sealed and have a long shelf life.

“It’s so great to see everybody serving. It’s a really hands-on way for them to impact someone’s life,” noted Avin, adding that the teenagers were to pack close to 44,000 meals over the three days of the conference.

Terry was happy to do her part.

Avin was impressed by the teens’ commitment to helping others.

“They all are just really eager to serve,” she said, “and it’s so nice to see young people getting engaged with service to others and having a heart for God and being able to really put that into action.”

“Right now, I’m making a shirt for children in Haiti,” said the 10th grader from the Diocese of Davenport, Iowa, inside the thematic park, which was located in a large exhibition hall in the Indiana Convention Center in Indianapolis.

The outreach, known as Hands Across Haiti, is a ministry of St. John Paul II Parish in Sellersburg, in the Archdiocese of Indianapolis. It provides decorated T-shirts, school supplies, tote bags and backpacks to its sister parish in Haiti.

Father Thomas Clegg, pastor of St. John II Parish, said his parish started the outreach six years ago, and they were happy to see NCYC participants step up and help with their initiative.

“The neat part for us is, that when we go down to visit (Haiti), we see them wearing these shirts and carrying these backpacks in our schools.”

Krokos is editor of The Criterion, newspaper of the Archdiocese of Indianapolis.