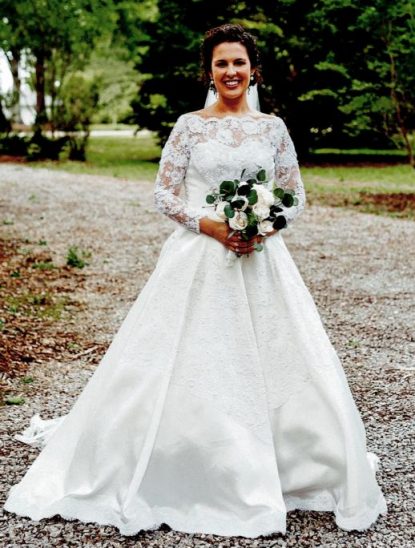 That explains why Gabrielle Campo Hillman already knew what dress she would wear for her wedding earlier this year: a hand-sewn gown first worn by her grandmother, Gayle Brack Kopelman, in 1961, and then by her mother, Tammy Kopelman Campo, in 1986.

“My mom already knew I was going to wear it,” Hillman, 28, said. “It was always discussed.”

All three wore the dress as they walked down the aisle of the same church — St. Agnes Church in Jefferson. Hillman’s great grandparents had moved into this Catholic parish in the 1940s, sent their children to school there and never left. Her grandmother was 19 when she got married. Her mom was 24, and Hillman was 28 on her wedding day this April.

Hillman said the original dress was designed from a dress featured in a magazine her grandmother liked. Kopelman’s Aunt Elenor, a bridal dressmaker, made the classic dress from satin with lace accents, but without pearls or sequins.

When her mother, Tammy, decided to wear the dress, it had not been properly preserved and parts of it had yellowed and deteriorated.

“Below the bust down was never touched, but my mom removed some of the top and removed the sleeves and added see-through, puffy sleeves for her wedding,” Hillman said. “My grandmother hand-sewed 5,000 pearls on it on the lace to fill in the buds of the flowers.”

After her 1986 wedding, her mom had the dress preserved and stored it at her house, Hillman told the Clarion Herald, newspaper of the Archdiocese of New Orleans.

“I never saw it but knew I was going to wear this dress,” Hillman said. “I guess because my great aunt made it for my grandmother, and my mom wore it. How could you not?”

Hillman, who is larger in stature than her mother, said when she tried on the dress, she unboxed it at her great-grandmother Herminie Simon Brack’s Jefferson house with her grandmother Gayle, her mother and sister present.

The dress had yellowed and had to be slightly altered to fit Hillman. She said the restorer removed a giant satin bow on the back and used it as bodice inserts. She also removed her mother’s puffy-sleeves addition and restored the sleeves to their original long-sleeve, lace-style worn by her grandmother.

The dress also was cleaned to revive its whiteness, something they didn’t know was possible.

When she walked down the aisle, Hillman said many in attendance remembered the dress, and others couldn’t wait to see it.

“My great-grandmother, who doesn’t move around a lot, was breaking her neck to see me come down the aisle,” Hillman said. “Everybody commented on how great the dress was, and what a cool story.” Information about the three-generation dress was included in the wedding program.

“The beauty of the dress is that it came full circle,” Hillman said. “It’s almost the same style when my grandmother wore it and the sentiment of the dress that each of us walked down the same aisle.

Starting a new tradition, a friend’s daughter, Eleanor Killens, wore a vintage dress as a flower girl that Hillman had worn in 1992.

Her closeness to her mother’s family resulted in Hillman buying her first home around the corner from her great-grandmother; and her second home with her new husband nearby.

She carried her great grandmother’s light blue rosary in her bouquet down the aisle.

“I knew I wanted to carry it; my mom suggested it,” she said.