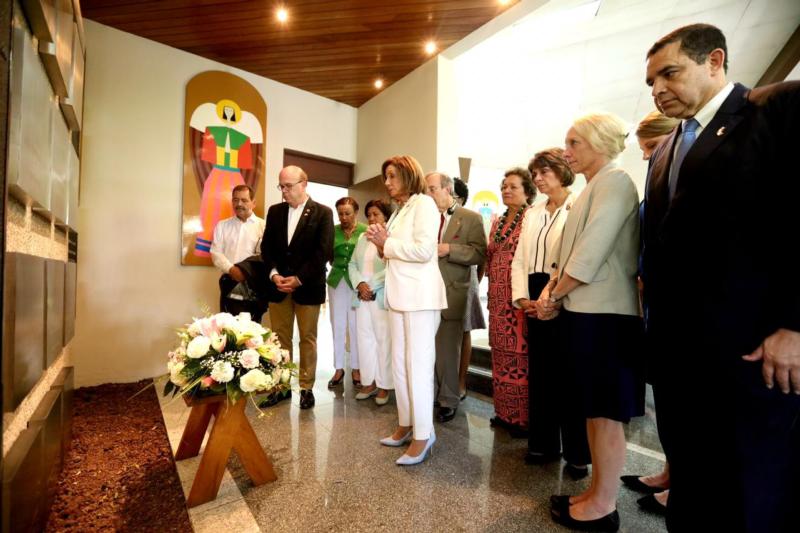 U.S. Rep. Jim McGovern, second from the left in a black jacket, stops with a congressional delegation in August 2019 at Central American University in San Salvador where six murdered Jesuit priests who greatly influenced his work and faith are buried. McGovern led the delegation to El Salvador to study causes of migration. In mid-November, he will attend a commemoration in El Salvador marking the 30th anniversary of the priests’ deaths. He said Congress should align its work with what the Jesuits stood for and “renew our commitment to compassion, to ending poverty, to standing with the poor, and to being advocates for the most vulnerable.” (CNS photo/courtesy Congressman Jim McGovern)

WASHINGTON (CNS) — This summer, when U.S. Rep. Jim McGovern took a congressional delegation to El Salvador to study the causes of migration, he planned a stop for the group at the place where six Jesuit priests who greatly influenced his work and faith are buried.

With House Speaker Nancy Pelosi and others, they stopped at a spot on the highest point of Central American University, to reflect on the brutality that befell the Jesuits Nov. 16, 1989. Just a few feet from where they’re buried, their bodies were found that day, bruised and battered, parts of their flesh, including their brains, strewn on a lawn outside their campus residence.

“I think it was an important visit for a whole bunch of reasons,” McGovern told Catholic News Service in a Nov. 1 interview. “It’s important for us in Congress to align ourselves with what the Jesuits stood for, and to align ourselves with that campus. I really, at this moment, feel that we all need to be inspired and we need to be motivated even more to pick up their work and to elevate their work, not only in El Salvador, but in the United States and around the world.”

Their work at the Jesuit university popularly known as the UCA (pronounced oo-kah) was about Catholic social teaching that called them to denounce human rights violations, pointing out injustices against the poor, demanding peace for civilians caught in the crossfire of a long running conflict in El Salvador funded in large part by the United States.

McGovern, a Democrat, was hoping the congressional group would find there the inspiration he says he found and that has guided his decades of service as a representative for Massachusetts’s 2nd Congressional District.

“I tell people all the time that a lot of my politics and a lot of the way I think about things, was influenced by them,” he said, speaking of the Jesuits. “I joke that when I applied to college, way back when, I think I was rejected by every Jesuit college and university that I applied to. On the other hand, I think I probably got one of the greatest Jesuit educations that anyone could possibly get by my interaction with the Jesuits at the UCA.”

McGovern came into contact with them in the 1980s when he was working as a staffer for Democratic Congressman Joseph Moakley, of Massachusetts’s 9th Congressional District. McGovern came to know well Fathers Ignacio Martin Baro, Segundo Montes and Ignacio Ellacuria, who were dragged out of their residence along with their fellow Jesuits, Fathers Juan Ramon Moreno, Joaquin Lopez y Lopez and Amando Lopez, and shot face down in a garden of roses. Their Salvadoran housekeeper, Elba Ramos, and her 16-year-old daughter Celina Ramos also were found murdered nearby.

Because Moakley’s office was involved in the debate about foreign aid, McGovern often visited the priests on his jaunts to El Salvador, whose right-wing government was then receiving large amounts of money from the U.S., fearing that if leftist groups there took possession of power, it could lead to a domino effect of communism in the region. It didn’t seem to matter that the government of El Salvador was directly attacking civilians.

“When I first went to El Salvador in the early ’80s, I remember being shocked at the brutality of the Salvadoran armed forces and the indifference of the Salvadoran government … the brutality that was happening each and every day against innocent people,” McGovern told CNS. “And I remember being terribly shocked and ashamed about my government’s role in all of this. I mean the United States provided billions of dollars to security forces.”

It was those security forces that were directly implicated in the murder of the Catholic priests and their companions, McGovern would later learn as he carried out an investigation into the horrific event.

The Moakley Commission report, whose work was detailed in the documentary “Enemies of War,” in part funded by the U.S. bishops’ Catholic Communication Campaign, determined that several high-ranking Salvadoran military officers were responsible for the murders and it eventually led to the end of U.S. military aid to El Salvador, which had kept the war alive for years.

“Even in the aftermath (of the Jesuit murders), the United States didn’t want to do anything about it,” McGovern recalled. “We just wanted to cut off the aid. We didn’t want to punish anybody.”

His time with the murdered men changed McGovern and the experience led him to return on several occasions to honor them, which he will do so again this year as he plans to be present at the university for the 30th anniversary commemoration of their deaths.

“Back in the early 1980s, before I spent some time in El Salvador, before I got to know the Jesuits at the UCA … my faith was, you know, about ritual, going to church on Sundays and that was it … not being particularly inspired,” he said. “That changed for me in El Salvador.

“I realized that if you commit yourself to a certain set of values, a life of service, if you are committed to lifting up the poor and standing with the poor, there’s something about that that can be very satisfying. It makes you feel like you’re living a life that’s worthwhile.”

The lessons the Jesuits left behind remain important today, he said, particularly for those who make life and death decisions, including here in the United States.

“To be honest with you, I’m also going there for a little inspiration,” McGovern said.

“If ever there was a time in our country, in terms of what’s going on in the world, to immerse ourselves in the teachings and the values of the Jesuits, it’s now,” he continued. “In the United States, we need to renew our commitment to compassion, to ending poverty and to standing with the poor, and to being advocates for the most vulnerable.”

That’s what the Jesuits were about and remain about today, he said, adding that he refers to their work when he’s struggling.

“Sometimes when I’m going through a period in Congress, when I’m kinda like, ‘Oh, my God, things are all screwed up. Where’s the hope?'” he said he refers to books written by Father Ellacuria. “I look at them and get reenergized, and I try to refocus on what really matters.”

For the congressman, the best way to honor the Jesuits is to continue their work.

“I think the way we to do that is not only in insisting and pressuring the powers that be to move forward, to get justice,” he said. “But we also have to follow in their footsteps, we, in the church, in universities and governments. We all need to stand on the side of the poor and be their voices and be their advocates, help lift them up because, quite frankly, that’s the right thing to do.”

He heads to El Salvador in mid-November, he said, “to remember my friends, the Jesuits, but also to be inspired by all that they stood for.”

NEXT: Three generations of Catholic women marry in same church with same dress