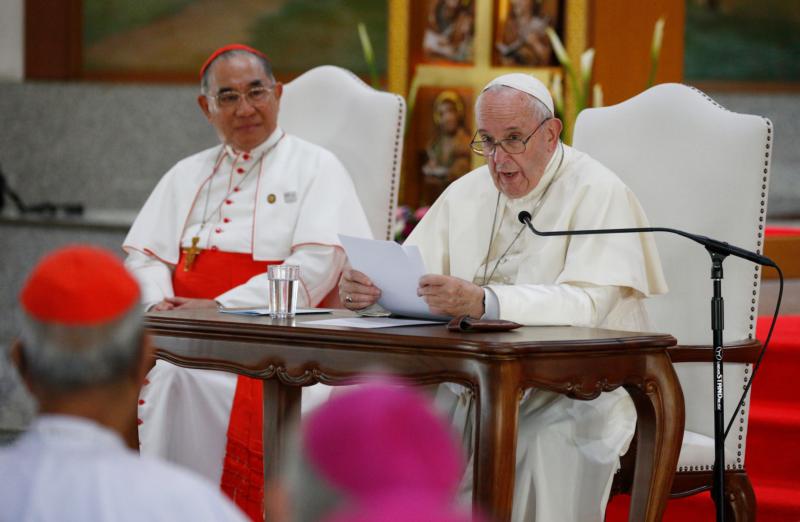 Pope Francis meets with the bishops of Thailand and with members of the Federation of Asian Bishops’ Conferences at the Shrine of Blessed Nicholas Bunkerd Kitbamrung in Tha Kham, Thailand, Nov. 22, 2019. Also pictured is Cardinal Francis Xavier Kriengsak Kovithavanij of Bangkok, left. (CNS photo/Paul Haring)

THA KHAM, Thailand (CNS) — In a large, predominantly Catholic village outside Bangkok, tens of thousands of people lined the roads and filled the grounds of a church complex to greet Pope Francis.

Their homemade signs included one that said, “You really know how to pope.” Another said, “Credo in Papam Franciscum” (I believe in Pope Francis).

Visiting the village of Wat Roman in Tha Kham Nov. 22, the pope continued with a theme he had focused on the day before: the meaning of missionary discipleship and evangelization in a country where Catholics are less than 1% of the population.

Spending the whole morning in Tha Kham, Pope Francis held separate meetings with seminarians, priests and religious, with representatives of the Federation of Asian Bishops’ Conferences and with Jesuits working in Thailand.

At the heart of his message was an exhortation to trust God to use their lives, examples and joy to spread the Gospel and make it grow.

He told the priests and religious not to think there are too few of them. “Instead think of yourselves as little tools in the Lord’s creative hands. He will be writing with your lives the finest pages of the history of salvation in these lands.”

The country’s 389,000 Catholics are served by 835 diocesan and religious-order priests and almost 1,500 sisters.

Deep prayer and evident joy are essential elements for any effective mission or ministry, Pope Francis told them. “A consecrated life that is unable to surprise you, to give you joy, is a consecrated life lived only by half,” he said in Spanish, departing from his prepared text but not worried about being understood because his cousin, Salesian Sister Ana Rosa Sivori, had a microphone, too, and translated his ad-libs into Thai.

“The Lord did not call us and send us forth into the world to impose obligations on people or lay heavier burdens than those they already have, which are many, but rather to share joy, a beautiful, new and surprising horizon,” the pope said.

Another temptation that can stall evangelization, he said, is accepting a view that Christianity is “foreign,” or just acting like it is.

Such talk, he said, “should spur us to find ways to talk about the faith ‘in dialect,’ like a mother who sings lullabies to her child,” the pope said. “With that same intimacy, let us give faith a Thai face and flesh, which involves much more than making translations. It is about letting the Gospel be stripped of fine but foreign garb; to let it ‘sing’ with the native music of this land and inspire the hearts of our brothers and sisters with the same beauty that set our own hearts on fire.”

Catholics make up about 3% of the population of all Asian countries combined, so the challenges of evangelization in Thailand are similar to those throughout the region.

“The memory of the first missionaries who preceded us with courage, joy and extraordinary stamina can help us take stock of our present situation and mission from a much broader and more transformative perspective,” the pope told representatives of the Asian bishops’ conferences.

The first thing, he said, is to avoid thinking that “times past were always more favorable or better for the proclamation of the Gospel.”

The second thing is to remember that faith is a gift of the Holy Spirit, who calls people to go out on mission, but also prepares hearts to hear and welcome the Gospel, the pope said.

Jesus’ apostles and the missionaries that have succeeded them for millennia had no guarantee of winning converts, he said. Their only certainty was that “no person or culture was a priori incapable of receiving the seed of life, happiness and, above all, friendship that the Lord wants to sow in them.”

“They were bold and courageous,” he said, “because they knew that in the first place the Gospel is a gift to be shared with and for everyone: doctors of the law, sinners, tax collectors, prostitutes. With and for all sinners, then as now.”

Mission, the pope said, requires “a paternal and maternal concern, because the sheep is only lost when the shepherd gives it up for lost, and not before.”

Mission is not a project to be planned, organized and carried out with precision, he said. Instead, it requires being converted constantly and loving the people to whom one is sent.

The bishops, he said, also must remember that in many Asian countries, evangelization was the work of laypeople for decades and even centuries.

“They were able to speak the dialect of their people, a simple and direct exercise of inculturation, neither theoretical nor ideological, but the fruit of their zeal to share Christ,” he said. “The holy and faithful people of God possesses the anointing of the Holy Spirit, which we are called to recognize, esteem and expand. Let us never lose the grace of seeing God working in the midst of his people, as he did in the past, as he is doing now and as he will continue to do.”