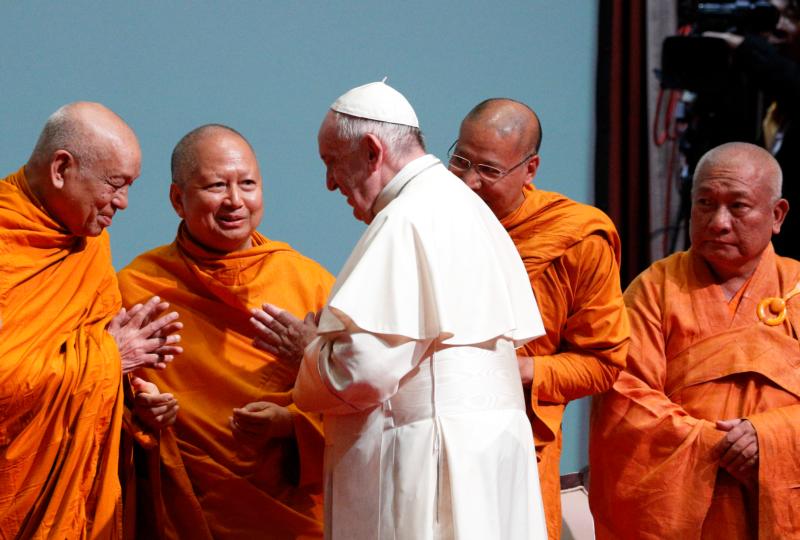 Pope Francis greets religious leaders during a meeting with Christian leaders and the leaders of other religions at Chulalongkorn University in Bangkok, Thailand, Nov. 22, 2019. (CNS photo/Paul Haring)

BANGKOK (CNS) — Meeting Thai religious leaders and then celebrating Mass with Catholic young adults, Pope Francis encouraged them to strengthen a culture that treasures the past, holds fast to faith, is unafraid of differences and always seeks a way to promote dialogue and cooperation.

No single nation or religious or ethnic group can guarantee itself a future “in isolation from or immune to others,” the pope told Thai Christian, Buddhist, Muslim, Sikh and Muslim leaders at Chulalongkorn University Nov. 22.

The global migration phenomenon, climate change, technological advances, conflict and war all “require us to be bold in devising new ways of shaping the history of our time without denigrating or insulting anyone,” Pope Francis insisted at his meeting with the religious leaders.

An “insular” way of thinking and acting will not work, he said. “Now is the time to be bold and envision the logic of encounter and mutual dialogue as the path, common cooperation as the code of conduct, and reciprocal knowledge as a method and standard.”

At the university named for King Chulalongkorn of Siam, who reigned from 1868 to 1910 and abolished slavery, Pope Francis asked all religions in Thailand to work together to end “the many present-day forms of slavery, especially the scourge of human trafficking,” which in Thailand includes trafficking both for prostitution and cheap domestic labor.

With dialogue and cooperation, the pope said, “we can provide a new paradigm for resolving conflicts and help foster greater understanding and the protection of creation.”

By promoting justice and peace, he said, the religions of Thailand will give their younger members “the tools they need to be in the forefront of efforts to create sustainable and inclusive lifestyles” based on respect for human dignity and concern for the environment.

Pope Francis ended his day celebrating Mass with representatives of the country’s young adult Catholics in Bangkok’s Cathedral of the Assumption. He read the Mass prayers in English but preached in Spanish; a Thai priest provided a successive translation.

For the Mass on the feast of St. Cecilia, a martyr, the pope and concelebrants wore bright red silk vestments sewn for the occasion by Thai Sisters of the Sacred Heart of Jesus and volunteer seamstresses.

In his homily, Pope Francis urged the young people to keep their faith alive and strong, being on guard so that disappointments and suffering do not cause their faith to weaken or grow cold.

“You need to be deeply rooted in the faith of your ancestors — your parents, grandparents and teachers,” he said. It’s not about being stuck in the past, but about having roots that reach deep and provide stability.

“Without this firm sense of rootedness, we can be swayed by the ‘voices’ of this world that compete for our attention,” the pope told them. “Many are attractive and nicely packaged; at first they seem appealing and exciting, but in the long run they will leave you only empty, weary, alone and disenchanted and slowly extinguish that spark of life that the Lord once ignited in the heart of each of us.”