A world without nuclear weapons is possible, pope says in Japan 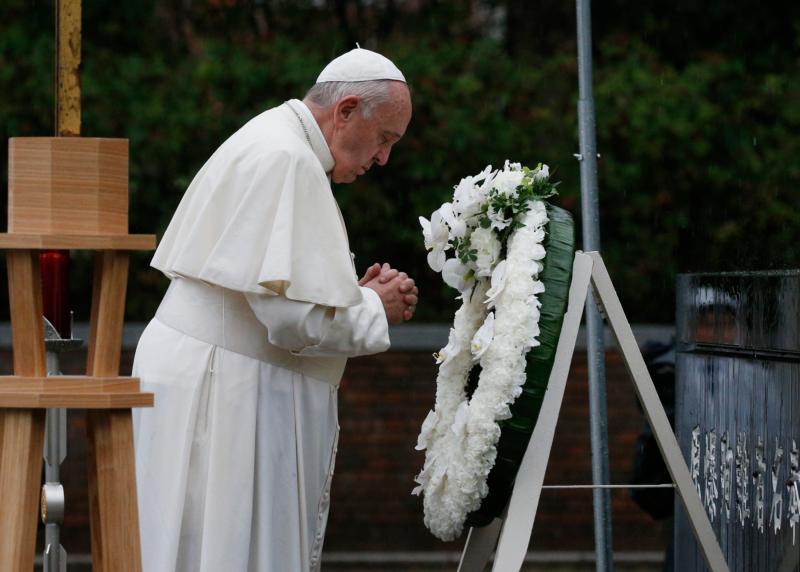 HIROSHIMA, Japan (CNS) — Saying it is “perverse” to think the threat of nuclear weapons makes the world safer, Pope Francis urged a renewed commitment to disarmament and to the international treaties designed to limit or eliminate nuclear weapons.

Pope Francis began his first full day in Japan Nov. 24 with a somber visit in the pouring rain to Nagasaki’s Atomic Bomb Hypocenter Park, a memorial to the tens of thousands who died when the United States dropped a bomb on the city in 1945. In the evening, he visited the Peace Memorial in Hiroshima, honoring the tens of thousands killed by an atomic bomb there, too.

“The use of atomic energy for purposes of war is today, more than ever, a crime not only against the dignity of human beings but against any possible future for our common home,” Pope Francis told several hundred people gathered with him in Hiroshima.

“The use of atomic energy for purposes of war is immoral, just as the possessing of nuclear weapons is immoral, as I already said two years ago.” he said. “We will be judged on this.”

“Future generations will rise to condemn our failure if we spoke of peace but did not act to bring it about among the peoples of the earth,” the pope said. “How can we speak of peace even as we build terrifying new weapons of war? How can we speak about peace even as we justify illegitimate actions by speeches filled with discrimination and hate?”

A policy of nuclear deterrence — counting on mutually assured destruction — to keep the peace makes no sense, the pope said. “How can we propose peace if we constantly invoke the threat of nuclear war as a legitimate recourse for the resolution of conflicts?”

The pope spoke in Hiroshima after listening to the horrifying stories of two survivors of the blast: Yoshiko Kajimoto, who was 14 in 1945; and Kojí Hosokawa, who was 17. Almost everyone they knew then is gone.

Kajimoto was working in a factory when the bomb was dropped. She was buried under timber and tiles, but eventually managed to get free. “When I went outside, all the surrounding buildings were destroyed,” she told the pope. “It was as dark as evening and smelled like rotten fish.

Helping evacuate the injured, she saw “people walking side by side like ghosts, people whose whole body was so burnt that I could not tell the difference between men and women, their hair standing on end, their faces swollen to double size, their lips hanging loose, with both hands held out with burnt skin hanging from them.”

“No one in this world can imagine such a scene of hell,” she said.

Hosokawa, was not able to attend the ceremony with the pope, but his testimony was read out: “I think everyone should realize that the atomic bombs were dropped, not on Hiroshima and Nagasaki, but on all humanity.”

“War,” he wrote, “makes people crazy, and the ultimate craziness is the atomic bomb that negated human existence.”

The pope began the day honoring victims of the bombing in Nagasaki, laying a wreath of flowers at a memorial to the 27,000 people killed instantly the day the bomb was dropped and the tens of thousands who died over the next five months from burns and radiation sickness, the pope prayed silently. Then he lighted a peace candle.

The Atomic Hypocenter Park is near the ruins of the city’s Catholic cathedral, which was the largest church in east Asia until the bomb destroyed it. The ruins, including a damaged wooden statue of Mary, are reminders, the pope said, of “the unspeakable horror suffered in the flesh by the victims of the bombing and their families.”

Thinking that developing, stockpiling and modernizing nuclear weapons is a deterrent to war provides only a “false sense of security,” the pope said. What is more, it feeds fear and mistrust, which hinder dialogue.

“Convinced as I am that a world without nuclear weapons is possible and necessary,” the pope said, “I ask political leaders not to forget that these weapons cannot protect us from current threats to national and international security.”

Pope Francis warned of the risk that the international arms control framework is being dismantled. The Vatican has expressed increasing concern about U.S. President Donald Trump’s continuing delay in beginning talks with Russia on extending or renewing the Strategic Arms Reduction Treaty and for allowing the U.S.-Russian treaty on intermediate-range weapons to expire.

“A world of peace, free from nuclear weapons, is the aspiration of millions of men and women everywhere,” the pope said in Nagasaki.

The use of nuclear weapons is not the only threat the arms pose, he said, pointing to the billions of dollars spent each year on maintaining nuclear stockpiles and developing new weapons when millions of people are starving and dying in poverty.

“No one can be indifferent to the pain of millions of men and women whose sufferings trouble our consciences today,” he said. “No one can turn a deaf ear to the plea of our brothers and sisters in need. No one can turn a blind eye to the ruin caused by a culture incapable of dialogue.”

While acknowledging that many of the people who joined him at the hypocenter were not Catholics, he still asked them to join him in echoing the prayer of St. Francis and asking God “to teach us to be effective instruments of peace and to make every effort not to repeat the mistakes of the past.”

A famous photo stood on an easel next to the small covered platform where the pope spoke. The picture, taken by U.S. Marine photographer Joseph Roger O’Donnell, shows a small boy carrying on his back his dead little brother, taking him to the crematorium in Nagasaki.

In late 2017 and early 2018, Pope Francis had prayer cards printed with the image on it and distributed widely, including in Japan. On the back of the card, the pope wrote, “The fruit of war.”

NEXT: Honor martyrs, work for Christ’s kingdom of peace, pope says in Nagasaki