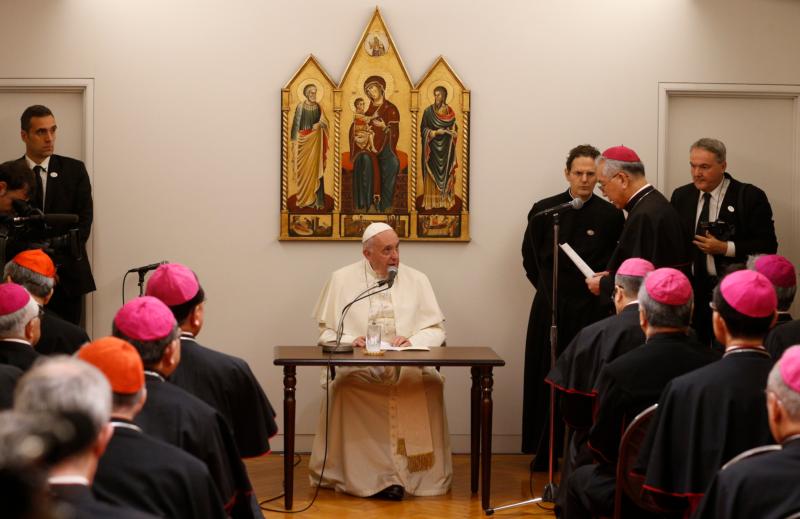 Pope Francis meets with the bishops of Japan at the apostolic nunciature in Tokyo Nov. 23, 2019. (CNS photo/Paul Haring)

TOKYO (CNS) — Describing himself as a “missionary pilgrim,” Pope Francis finally fulfilled a more than five-decade-old desire to share the Gospel in Japan.

Arriving in Tokyo Nov. 23 after a five-hour flight from Bangkok, the pope met almost immediately with the bishops of Japan and outlined the major themes of this four-day stay: nuclear disarmament, the example of the Japanese martyrs, interreligious dialogue and special care for the young.

He joked with the bishops that the Japanese are famed as good workers, which is why he set to work as soon as he landed.

Moving on to his prepared remarks, Pope Francis wanted to make sure the bishops knew that “ever since I was young I have felt a fondness and affection” for Japan, and he entered the Jesuits hoping one day to be sent as a missionary to the country, continuing work begun by the great 16th-century Jesuit missionary St. Francis Xavier. Unfortunately, his superiors thought health issues with his lungs made the missionary life impossible.

Finally setting foot in the country for the first time less than a month before his 83rd birthday, Pope Francis told the bishops it “has been long in coming.”

But patience is a virtue and has been exercised by missionaries and Japanese Catholics for centuries, the pope said. Less than half of 1% of Japan’s inhabitants are Catholic, and many of those are foreign workers from Vietnam, the Philippines and other countries.

Still, the pope said, the history of the Japanese martyrs and of the “hidden Christians” shows the strength and depth of Japanese Catholicism. Japan’s rulers began persecuting Christians in 1597 and in 1644, Father Konishi Mansho, the last remaining priest in the country, was martyred. No priest set foot in the country for the next 200 years, yet the “hidden Christians” continued to gather secretly, instruct one another in the faith, pray together and baptize new members.

“You are a living church that has been preserved by invoking the Lord’s name and contemplating how he guided you through the midst of persecution,” the pope told the bishops.

The theme the bishops chose for the pope’s visit is “protect all life,” which, he said, means seeing and loving each life as a gift.

“Protecting all life and proclaiming the Gospel are not separate or opposed; rather, each appeals to and requires the other,” the pope said.

As members of a small minority community, he said, Catholics in Japan should offer “a humble, daily witness and openness to dialogue with other religious traditions.”

That witness of love and service enables the church to speak “with greater freedom, especially when addressing pressing issues of peace and justice in our world,” the pope said.

Welcoming the pope to Japan, Archbishop Joseph Mitsuaki Takami of Nagasaki, president of the bishops’ conference, told him, “Japan, the only country where atomic bombs have been dropped in war, cries out that such a disaster should not be repeated.”

“We hope that you will appeal to the world that humanity does not need nuclear weapons,” the archbishop said.

Scheduled to travel the next day to Nagasaki and Hiroshima, the sites of the 1945 atomic bomb blasts, Pope Francis told the bishops he would “echo your own prophetic calls for nuclear disarmament.”

“I wish to meet those who still bear the wounds of this tragic episode in human history, as well as the victims of the triple disaster,” which occurred in 2011 when a strong earthquake caused a severe tsunami that flooded the Fukushima nuclear power plant. It caused a meltdown, hydrogen explosions and the release of radioactive contamination.

The continuing suffering of the victims, he said, are a reminder of “our human and Christian duty to assist those who are troubled in body and spirit, and to offer to all the Gospel message of hope, healing and reconciliation.”

“Evil has no preferences; it does not care about people’s background or identity,” Pope Francis said. “It simply bursts in with its destructive force.”

The pope prayed that Catholics would “never be afraid to pursue, here and throughout the world, a mission capable of speaking out and defending all life as a precious gift from the Lord.”

The lives of young people today need special care and protection, he told the bishops.

In a culture so often focused on “efficiency, performance and success,” the pope asked them to foster “a culture of generous and selfless love, capable of offering to everyone — and not only to those who have ‘made it’ — the possibility of a happy and successful life.”

After the pope read his prepared remarks, he told the bishops he would like to hear their questions, comments and concerns. At that point, reporters were ushered from the room.

NEXT: A world without nuclear weapons is possible, pope says in Japan