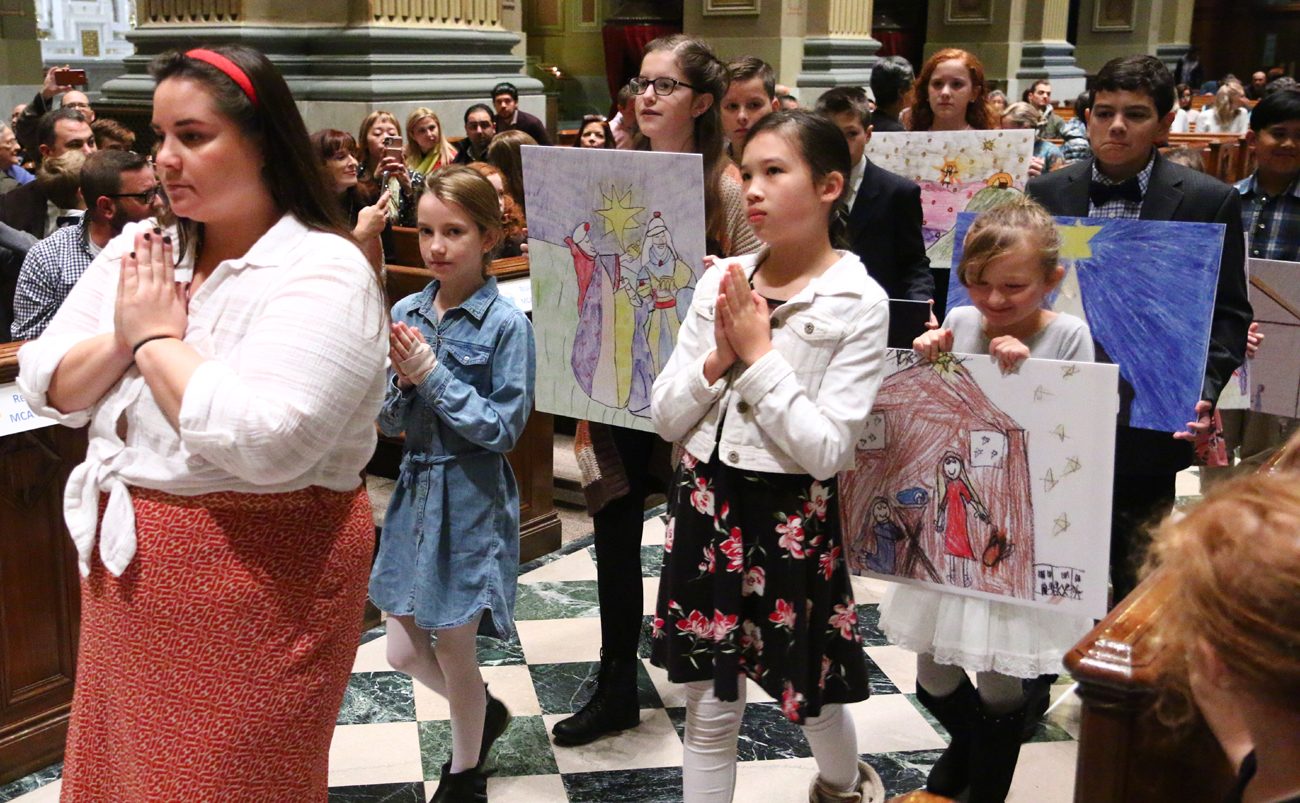 Children who produced contest-winning artwork for the Holy Childhood Association -- a pontifical mission society -- walk in procession at the World Mission Sunday Mass, Oct. 20, 2019 in the Cathedral Basilica of SS. Peter and Paul, Philadelphia. (Photo by Sarah Webb)

QUEBEC CITY (CNS) — The great doorway to growing in the Christian faith is narrowing from year to year in Quebec as baptisms have significantly declined in since 2012 and there’s no indication the trend will reverse.

Confronted with a shift away from traditional practices of transmitting the faith in childhood, leaders in the Quebec church are rethinking how to approach children’s spirituality.

Clement Vigneault, director of the Catechesis Office of Quebec, is closely monitoring the situation. Before the question of baptizing and catechizing children is even raised, he sees a growing concern — especially among grandparents — to consider the spiritual life of children.

“There’s a trend of waiting to baptize children in order to give them the opportunity to choose later,” he said. “But how will they choose if they have never been accompanied in their spiritual life?”

Elaine Champagne, associate professor of theology and religious studies at Laval University, has been working on children’s spirituality for several years. It was while working in pediatric health care for eight years that she developed her interest in the topic.

She noted that spiritual care in health facilities was mainly oriented toward parents and that children sometimes were forgotten. She said, however, that being interested in this “sacred, very personal space” in children is just as important.

“You have to be respectful and listen a lot,” Champagne said.

The “existential” mode is interested in how they live in the present. In the “sensitive” mode, children communicate with their bodies and senses. “Something is said all over their bodies. The whole body expresses it, their being is coherent,” Champagne said. In the “relational” mode, it’s about the relationship to oneself, to others, to God and to one’s environment.

Champagne invites adults to go beyond the image they many have of children’s spirituality, which is sometimes made up of projections. Certainly, the children have a “beautiful capacity for wonder,” but it’s also necessary to know how to respect that “in this state of becoming, there’s fragility, a dependence.”

The Rev. Jean-Daniel Williams is working on a doctorate in practical theology on children’s ministries. As a part-time chaplain at McGill University and an associate priest at the Anglican Christ Church Cathedral in Montreal, he works with children of all ages.

“There’s of course a difference between a 3-year-old and a 10-year-old child. However, it should be emphasized that children are completely human from the beginning. If we see children as adults in the making, we don’t respect the reality of their current spirituality,” he explained.

For Rev. Williams, children are the “most spiritual beings in the world” simply because they ask so many questions. “It’s a bit cliche to talk about children always asking, ‘Why,'” he said. “But isn’t the very foundation of religion people asking, ‘Why?'”

Curiosity and openness are, he said, two distinct marks of children’s spirituality.

“It’s important to understand that in institutional religion, there has been a tradition of having a normalized path: baptism, communion and so on. But the questions “Why I exist?” “How to make the right moral choice?” “Do I belong to something bigger than myself?” remain regardless of the institutional or family context,” said Rev. Williams, who is the father of 11-year-old twins.

Rev. Williams reminds that it’s difficult to find the right balance to recognize the child as he or she is without treating the child as an adult. He believes that churches have not always been able to set an example in this regard.

“Jesus says we must attract children with all our hearts. Otherwise we are not the church.” 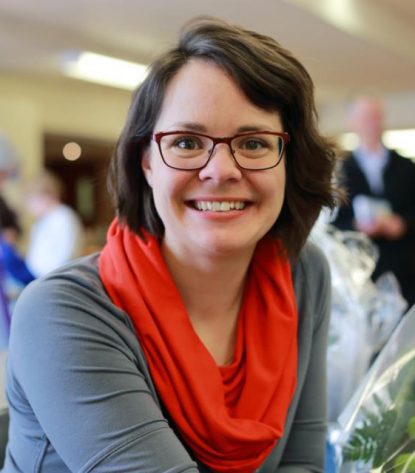 Valerie Roberge-Dion, director of communications for the Archdiocese of Quebec, has written a book of personal reflections on her role as a mother concerned about transmitting her Catholic faith to her children. She is seen in this 2016 file photo. (CNS photo/Philippe Vaillancourt, Presence)

Author of “Entre ciel et mere” (“Between Heaven and Mother”), a book of personal reflections on her role as a mother concerned about transmitting her Catholic faith, Valerie Roberge-Dion, believes that from a Christian perspective, spirituality is marked “by the great criterion of love.”

“The child awakens to love as he or she grows,” Roberge-Dion, director of communications for the Archdiocese of Quebec, said of her three children, ages 7, 5 and 2. “I can see in my children that they are gradually opening up to others, becoming capable of empathy, small attentions. … I help them to be attentive to what’s stirring in them and to name the emotions that color their inner life.

“As believers, my husband and I have exposed our children to our ways of growing in faith: Masses, activities with other believing families. We also take time every evening to do a little prayer with the family, very often chaotic. But we are trying to create a moment of communion, which is the most important thing,” she said.

In order to allow children younger than 5 years old to “awaken to the faith while having fun,” officials from the Office of Faith Education of the Archdiocese of Montreal asked Christiane Boulva to develop what would become “La P’tite Pasto,” or “little pastoral.” Its English version is called Little Hearts Playgroup. (Learn more about the program here.)

The program covers 60 themes over a three-year period. It is being used in more than 100 parishes throughout Quebec as well as in Alberta, Manitoba and Yukon.

Boulva, a mother who was interested in faith development in children, is concerned about the lack of places where children can hear about spirituality today.

“In the future, our society must succeed in reaching them where they will be and offer them and their parents activities adapted to their aspirations, their dreams and the challenges they face on a daily basis by directly meeting their needs,” Boulva said.

In doing so, it is not necessary to be afraid to discuss spirituality with children at an early stage, she said, cautioning parents to beware that such efforts are not so much a question of wanting to “explain” God as it is of allowing children to “get to know him on a daily basis.”