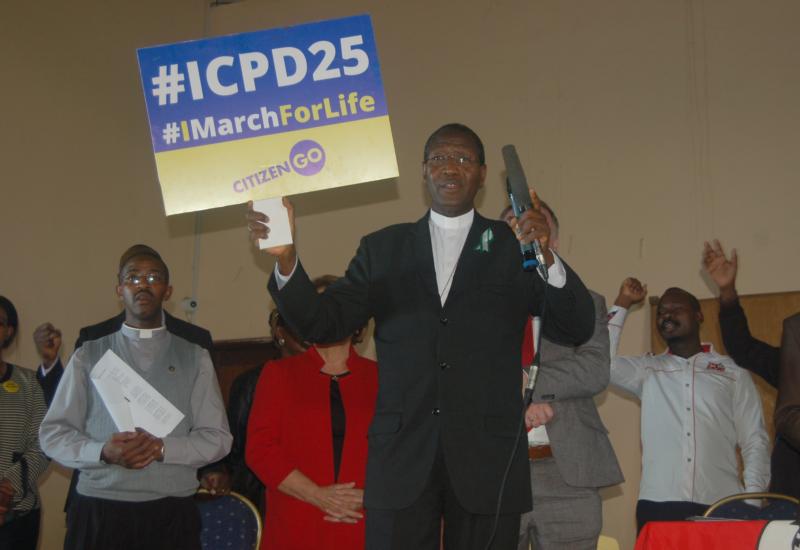 Retired Bishop Alfred Rotich, vice chairman of the Family Life Commission of the Kenya Catholic Bishops’ Conference, speaks while holding a placard during the closing of a meeting of the parallel population summit in Nairobi Nov. 14, 2019. (CNS photo/Fredrick Nzwili)

NAIROBI, Kenya (CNS) — Kenya’s Catholic bishops joined with international pro-life groups in rejecting the final document from an international summit on health rights for women and girls because it supported practices contrary to African cultures and religious beliefs.

Their objections Nov. 14, the final day of the summit, focused on the inclusion of abortion as vital to sexual and reproductive rights of women and the opening for the introduction of same-sex unions and homosexuality into communities.

The Nairobi Summit on ICPD25 met Nov. 12-14 in the Kenyan capital to mark the 25th anniversary of the International Conference on Population and Development in Cairo in 1994.

Kenyan bishops earlier warned that that summit was ploy to introduce abortion and homosexuality in Africa and the developing world.

“We are not happy with the summit. We have seen that there are a lot of lies and wrong ideologies in the conference. They are trying to re-create humanity taking the position of God,” retired Bishop Alfred Rotich, vice chairman of the Family Life Commission of the Kenya Conference of Catholic Bishops, told Catholic News Service. “We are saying we are not going to be part of any resolution that they have come up with at the summit.”

The summit included about 12,000 participants from 160 countries. It was organized by the governments of Kenya and Denmark and the United Nations Populations Fund, known as UNFPA, the world body’s sexual and reproductive health agency.

“Since the Cairo ICPD, we have put women and girls at the center of the global development. This has paid off time and again. That ICPD vision is still far from reality, and that journey that began 25 years is far from over,” Dr. Natalia Kanem, UNFPA executive director, said in opening the summit. “It’s now time to finish that unfinished business.”

The UNPFA estimates 232 million women worldwide want to prevent pregnancy but are not using modern contraception. Each day more than 800 women die from preventable causes during pregnancy and childbirth, and 33,000 girls are forced into marriage. In addition, every year more than 4 million girls are subjected to female genital mutilations.

“I would like to restate my personal commitment and that of the government of Kenya to providing the leadership necessary to ensure that this practice (of genital mutilation) ends within this generation,” Kenyan President Uhuru Kenyatta told the summit.

But as the conference unveiled its final document, faith leaders, pro-life and pro-family organizations, diplomats, scholars, youth leaders and others released their own declaration in which they expressed dismay at the summit’s focus on values they believe run counter to African culture and religious beliefs.

“We … call on governments everywhere to accelerate the promise of ICPD by implementing the … neglected ICPD commitments made 25 years ago,” the groups said.

The commitments include respect for sovereignty, religious and cultural values, protection and strengthening the family, respect for the rights of parents and an end to abortion in line with the protection of right to life from conception to natural death.

“By focusing on the unfinished and overlooked business of ICPD, families will flourish, children will thrive and nations will experience more robust sustainable development,” said Anne Mbugua, who chairs the Kenya Christian Professional Forum.

After failing to get accreditation for the summit, the groups convened at Cathedral Basilica of the Holy Family in Nairobi for a parallel conference.

“We have to stand for the family in accordance with the church doctrine. … The moment the family falls apart, the society will also fall,” Archbishop Hubertus van Megen, apostolic nuncio to Kenya, told one of the parallel meetings.

NEXT: Catechism will be updated to include ecological sins, pope says