Bishops ask Filipinos to bring gifts for poor to Mass 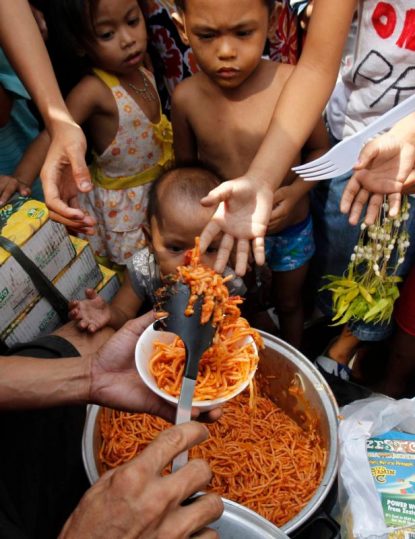 Children receive free meals Jan. 4, 2013, in front of a Catholic church in Manila, Philippines. Catholic leaders in the Philippines have appealed to churchgoers to bring gifts for the poor when they attend Mass, especially during the observance of World Day of the Poor Nov. 17, 2019. (CNS photo/Romeo Ranoco, Reuters)

MANILA, Philippines (CNS) — Catholic leaders in the Philippines have appealed to churchgoers to donate gifts for the poor when they attend Mass, especially during the observance of World Day of the Poor Nov. 17.

Ucanews.org reported that Archbishop Rolando Tirona, head of the social action arm of the Philippine bishops’ conference, said the sharing of gifts “is a small gesture to restore hope for the poor.”

In a letter to dioceses across the country, the prelate called for the holding of various events to aid the needy “so that no one feels deprived of solidarity.”

“In solidarity with Pope Francis’ intentions for the poor … I humbly ask your dioceses’ participation in this special event consistent to our vision of being a church of the poor,” wrote Archbishop Tirona.

In an earlier statement, Bishop Tirona said it was a challenge for Catholics to be mindful of their actions toward the less fortunate and the underprivileged.

Father Edwin Gariguez, executive secretary of the social action secretariat of the bishops’ conference, said Catholics cannot continue to be blinded by injustice. He said the dignity of the poor should be regarded “in the same way as our own.”

In the Philippines, farmers, fishermen and children are the poorest sectors, according to a government poverty report issued by the Philippine Statistics Authority.

The World Bank estimated poverty incidence in the Philippines at 21.9 percent for 2018. In a report released last month, it predicted this would fall below 20 percent from next year. It sees the Philippines’ poverty rate further declining to 19.8 percent and 18.7 percent in 2021.

PREVIOUS: All of life should be journey toward God, pope says at memorial Mass