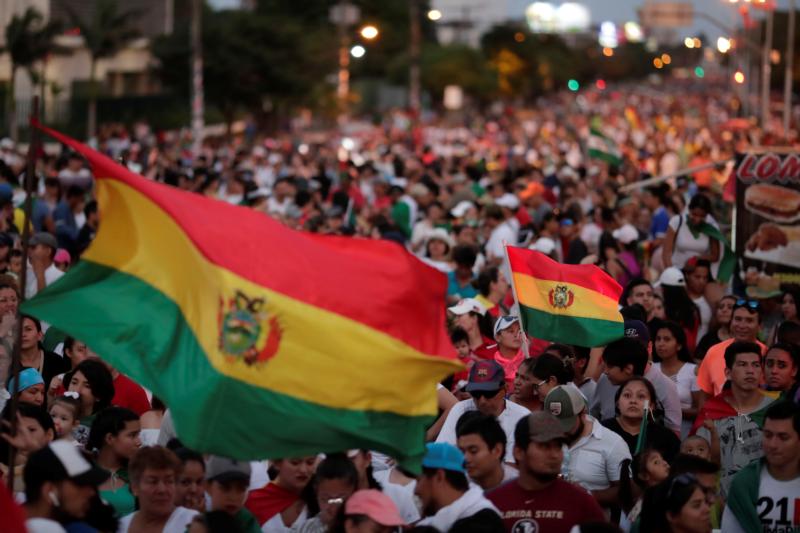 Demonstrators take part in an Oct. 27, 2019, protest against Bolivian President Evo Morales and the election results in Santa Cruz. The Bolivian bishops called on politicians in the South American country to respect “the will of the people” and review the results of the recent election that gave Morales a fourth consecutive term. (CNS photo/Ueslei Marcelino, Reuters)

LA PAZ, Bolivia (CNS) — The Bolivian bishops called on politicians in the South American country to respect the will of the people and review the results of the recent election that gave President Evo Morales a fourth consecutive term.

The result was not recognized by the country’s opposition parties, and thousands of Bolivians have been taking to the streets each day to protest what they see as a fraudulent election. Two people have died and dozens have been injured in clashes between protesters and government supporters.

In a statement issued Oct. 31, the bishops’ conference suggested that the only way out of the political crisis is for the government, opposition parties and civil society groups to conduct a “wholesome audit” of the election that will determine if it was fair, or if a runoff vote needs to be held between Morales and his main rival, Carlos Mesa.

The conference said this audit needs to evaluate which laws were broken before the election and also if votes were properly counted. The bishops also called on the government and opposition parties to negotiate how an audit could be held, and agree to abide by its results.

“We are seeking a peaceful way to end this crisis” said Carlos Cordero, a political adviser for the Bolivian bishops’ conference.

According to Bolivia’s electoral tribunal, Morales won the Oct 20 election with a 10.5% lead over Mesa. This was just above the 10% threshold required to avoid a runoff vote between the top two candidates.

Mesa claims there was serious cheating by the tribunal, which is made up mostly of judges selected by Morale’s party. With 83% of votes counted on election night, the difference between both candidates was at 7%. But the publication of results was suspended, inexplicably, for 22 hours. When results were once again released by authorities, 95% of the vote had been counted, and Morales’ lead had stretched to 10%.

Morales said his lead expanded thanks to votes coming in from rural areas where his support is strong. But the Organization of American States, which was monitoring the election, said the change in voting patterns was “hard to justify.”

Fundacion Jubileo, a research organization supported by the Catholic Church, did its own count of the results with 1,000 volunteers who monitored a sample of 3,500 voting tables across the country. It calculated that the difference between both candidates was 5.5%.

“There is a very big sense of frustration swelling within us” said Christian Mendoza, a musician from La Paz, who has been attending the protests on a regular basis. “This government has been in power for 13 years and it seems like they just keep finding undemocratic ways to stay.”

Protesters have staged dozens of roadblocks in cities and even at a couple of Bolivia’s border crossings to pressure the government into accepting a new election with a different electoral tribunal. They say they no longer trust Morales, who lost a 2016 referendum on whether he could run for a fourth term, but obtained a high court ruling the following year that allowed him to run anyway.

Morales has called on his supporters to defend what he describes as the “rural and indigenous” vote. Thousands of government supporters have marched through La Paz in support of Morales, the nation’s first indigenous president, and clashed with opposition supporters who staged roadblocks.

“We will defend him with our lives if we have to” said Erminia Choquetarqui, an indigenous woman who attended a Morales rally Oct. 30. Choquetarqui said Mesa represented the white elite that long ruled the country before Morales. She said Mesa was Bolivia’s vice president in the early 2000s when protests by indigenous people were violently repressed.

“How can we allow someone like that to come back?” she asked.

In an effort to cool tensions, Morales accepted an audit of the election conducted by the Organization of American States. But the opposition has refused to accept the OAS audit, because it says it was never consulted on how it will be carried out.

On Nov. 2, the Civic Committee of Santa Cruz, Bolivia’s richest province, gave Morales a 48-hour deadline to resign, saying that it would “take measures” that “guarantee” he leaves the presidency. The Santa Cruz committee also wrote a letter to Bolivia’s armed forces, urging them to join their struggle.

Cordero said the bishops’ conference wants to encourage Morales and the opposition to take more moderate positions and try to solve their differences through an audit supervised by all sides. Cordero explained that if the audit determines that Morales did not win by more than 10%, some measures could be taken to ensure fairness in a runoff election, like selecting a new electoral tribunal.

Morales has had a conflictive relationship with the bishops’ conference, which he has accused of being part of the opposition. But Morales is on good terms with Pope Francis, who visited Bolivia in 2015 and asked for forgiveness for crimes committed by the church toward indigenous people.

Cordero explained that during Morales’ presidency, the church has been sidelined from being a moderator in social conflicts. But he added that now it might be time for the church to once again take on that role.

“Our doors are open” he said.