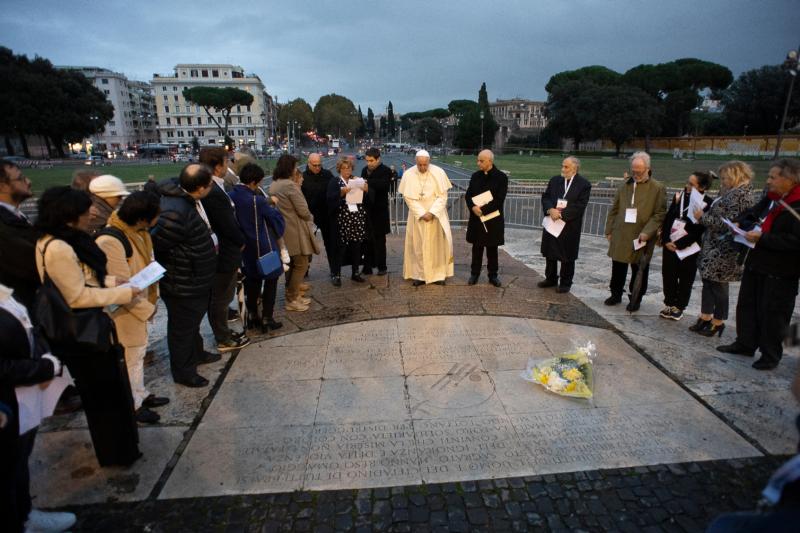 Pope Francis dedicates a plaque before celebrating Mass at the Basilica of St. John Lateran in Rome Nov. 11, 2019. The plaque commemorates those who have died in the city because of poverty and neglect. (CNS photo/Vatican Media)

ROME (CNS) — No one is so far from God that Christ cannot bring them back, Pope Francis told members of the Diocese of Rome’s new pastoral teams responsible for outreach.

“In carrying out your service, keep hold of this knowledge, this certainty: There is no human heart in which Christ does not want to and cannot be reborn,” the pope said Nov. 9, celebrating Mass on the feast of the Dedication of the Basilica of St. John Lateran, the cathedral of the Diocese of Rome.

Celebrating Mass in the basilica, the pope assigned a different Scripture passage to the faithful in general, to the diocese’s priests and to the new pastoral teams.

The Gospel reading at the Mass was St. John’s version of Jesus cleansing the temple. When Jesus is asked by what authority he acted, he replied, “Destroy this temple, and in three days I will raise it up.”

Pope Francis asked the pastoral teams to remember that passage as they seek new ways to reach out to those far from the church or from faith.

“In our existence as sinners we often move away from the Lord and extinguish the Spirit. We destroy the temple of God that is within each of us,” he said. “But this is never a definitive situation. The Lord needs only three days to rebuild his temple inside us.”

“No one, no matter how wounded by evil, is condemned on this earth to be separated from God forever,” the pope said. “In a way that is often mysterious, but always real, the Lord opens new cracks, desires for truth, goodness and beauty that make space for evangelization.”

Reaching out to those people, Christians can be met by mistrust and even hostility, but that is not a reason not to try to share God’s love, the pope said. “Just nourish the conviction that God needs only three days to resurrect his son in the human heart.”

Before the Mass, Pope Francis dedicated a plaque outside the basilica commemorating all those who have died in the city because of poverty and neglect. He composed a special prayer for the occasion; it included the verse:

“For the millions of children, women and men who do not want to curse but to love and pray, work and unite to give birth to a land of solidarity — a land, our land, where every person gives the best of him- or herself before dying.”

NEXT: Gospel is God’s gift, not a means to wage war, bishop says