Gospel is God’s gift, not a means to wage war, bishop says 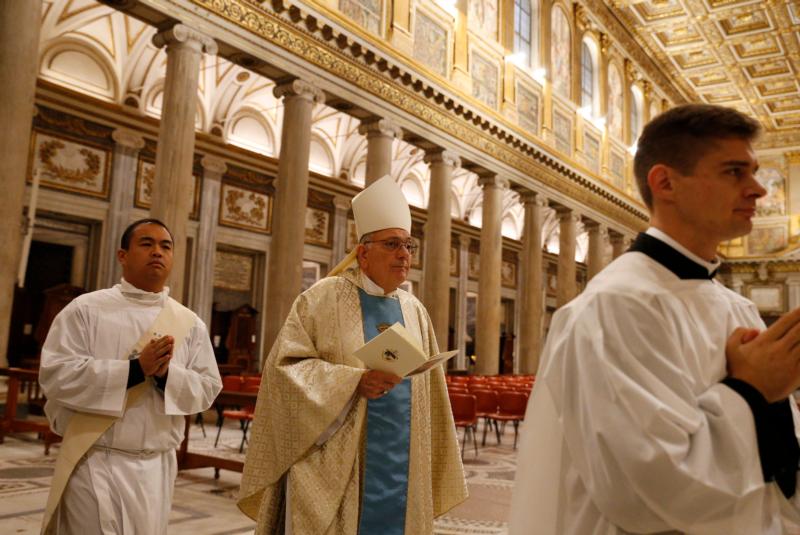 Bishop Nicholas A. DiMarzio of Brooklyn arrives in procession as U.S. bishops from the state of New York concelebrate Mass at the Basilica of St. Mary Major in Rome Nov. 11, 2019. The bishops were making their “ad limina” visits to the Vatican to report on the status of their dioceses to the pope and Vatican officials. (CNS photo/Paul Haring)

VATICAN CITY (CNS) — Bishops should not give in to calls to be more combative cultural warriors in the world, said Bishop Nicholas DiMarzio of Brooklyn.

“The Gospel has an internal strength that doesn’t need to be waged as war but needs to be presented as God’s great gift,” Bishop DiMarzio said in his homily Nov. 11 during Mass at the Rome Basilica of St. Mary Major.

Bishop DiMarzio was the principal celebrant and homilist at the first Mass the bishops of New York celebrated during their visits “ad limina apostolorum” — to the threshold of the apostles — to report on the status of their dioceses.

At St. Mary Major, the New York bishops celebrated Mass in the chapel that houses the Marian icon “Salus Populi Romani” (health of the Roman people).

After the Mass, the bishops walked down the stairs under the basilica’s main altar to pray before the silver reliquary that houses what traditional holds is a relic of the manger where Christ was born.

In his homily, Bishop DiMarzio reflected on the day’s memorial of St. Martin of Tours, the fourth-century bishop who served as a Roman soldier stationed in Gaul, now present-day France.

According to the early Christian historian Sulpicius Severus, while patrolling on a winter night, St. Martin cut his cloak in half and gave it to a poorly clothed beggar along a road.

The following night, Severus wrote, the saint “had a vision of Christ arrayed in that part of his cloak with which he had clothed the poor man” and “hastened to receive baptism.”

Like St. Martin, Bishop DiMarzio said, Christians are called to “turn to Christ and recognize him in other people.”

He also noted that while the saintly prelate was known as a “warrior bishop” who fought against the Aryan heresy, St. Martin was also “careful” and made “sure that there was no error in his diocese.”

Scandal, the bishop said, can come easily “to the people of God, the ‘little ones,’ and we’ve been living with that scandal now for years.”

“We’ve come to understand that our people are scandalized when they think we should be combatting the modern-day heresy more as warrior bishops, more as cultural warriors,” he said.

“But we’re not called to that,” he said. “We’re called to preach the Gospel,” which has its own power and is a gift.

Bishop DiMarzio called on his fellow bishops to follow St. Martin’s example and “return to our dioceses renewed and refreshed with greater strength to make sure that our faith increases.”

NEXT: Vatican no longer sees Diocese of Fairbanks as mission territory