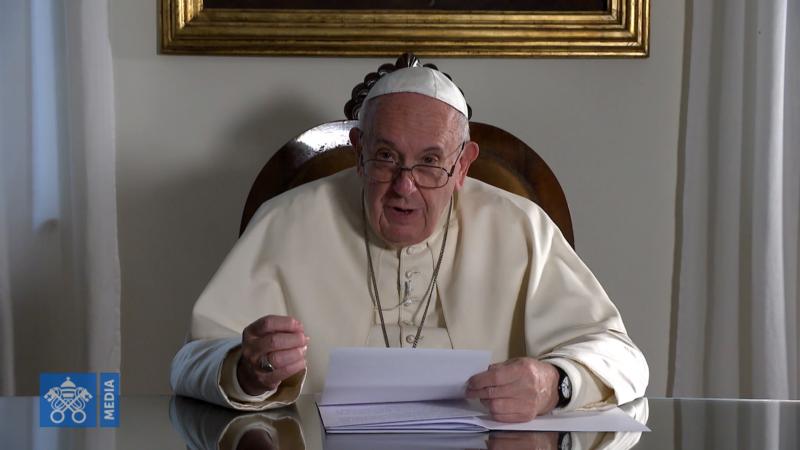 Pope Francis speaks from the Vatican in a video message to the Japanese people in advance of his visit to Japan. The pope will first visit Thailand on his Nov. 19-26 trip. (CNS photo/Vatican Media)

“Using nuclear weapons is immoral,” the pope said in a video message released Nov. 18. The video was a greeting to the people of Japan in advance of the pope’s arrival there Nov. 23.

“The theme chosen for my visit is ‘Protect All Life,'” the pope said in the video. The bishops of Japan chose the theme from the prayer Pope Francis wrote to conclude his encyclical “Laudato Si’, on Care for Our Common Home.”

In the video, the pope said that the “strong instinct, which resonates in our hearts, to defend the value and dignity of every human person acquires particular importance in the face of the threats to peaceful coexistence that the world faces today, especially in armed conflicts.”

Japan knows “the suffering caused by war,” he said. “Together with you, I pray that the destructive power of nuclear weapons will never again be unleashed in human history. Using nuclear weapons is immoral.”

The people of Japan also know how important it is to promote a “culture of dialogue and fraternity, especially among the different religious traditions,” the pope said, adding that he hoped his visit would encourage people “on the path of mutual respect and encounter.”

Expressing his hope “to appreciate that great natural beauty that characterizes your nation,” the pope said he also would encourage efforts “to promote and strengthen the protection of life that includes the earth, our common home.”

NEXT: More must be done to include women in church bodies, pope says