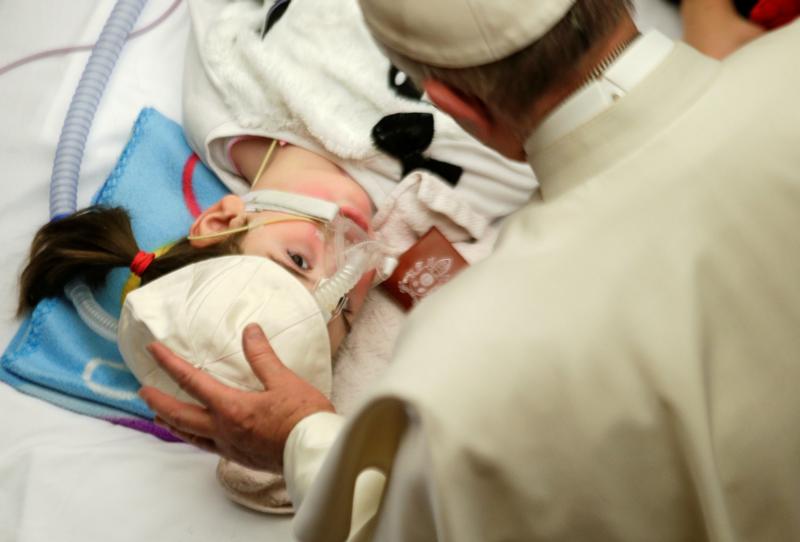 VATICAN CITY (CNS) — The pained faces of children with serious medical conditions and the suffering of their families should inspire doctors and nurses to serve with passion and enthusiasm, Pope Francis said.

Commemorating the 150th anniversary of the Vatican-owned Bambino Gesu children’s hospital Nov. 16, the pope encouraged medical professionals to “never to lose the ability to see the suffering face of a child even behind a simple sample to be analyzed, and to hear the cry of parents even within your laboratories.”

“I am reminded of that question, to which it is difficult to find an answer, from the great (Fyodor) Dostoevsky: ‘Why do children suffer?’ Always keep this question alive: ‘Why does a child suffer?'”

Pope Francis said there is no answer to the question, but it must lead to greater care for a suffering child and more prayers to God to intervene.

In an effort to guarantee the hospital would have a secure future, in 1924, the Salviati family donated it to Pope Pius XI.

Over time, the hospital added new pavilions, new operating rooms and new outpatient departments. Today, with two branches outside Rome, Bambino Gesu children’s hospital is one of the most modern and well-equipped pediatric facilities in the country.

Bambino Gesu’s truest identity, he said, comes from the “moral authority of sick and suffering children,” and the awareness of that authority “should be the driving force behind your action together, in agreement and with a community spirit, in overcoming obstacles and differences.”

A cornerstone of the hospital’s mission, he continued, is medical research into the diagnoses and cures for rare diseases. The pope expressed his admiration for “the passion and enthusiasm that you put into your work of care and research.”

“Lord, bless the hands of the doctors and nurses so that they can help the children throughout the course of their illness and recovery,” the pope prayed.

Thanking the hospital’s doctors, surgeons and nurses, he told them, “Always be aware of God’s blessing of your hands. Your ability to heal in this way is a gift to you and to the people entrusted to you.”

PREVIOUS: Having a friend who is poor will help you get to heaven, pope says

NEXT: Efforts to protect life include promoting disarmament, pope says