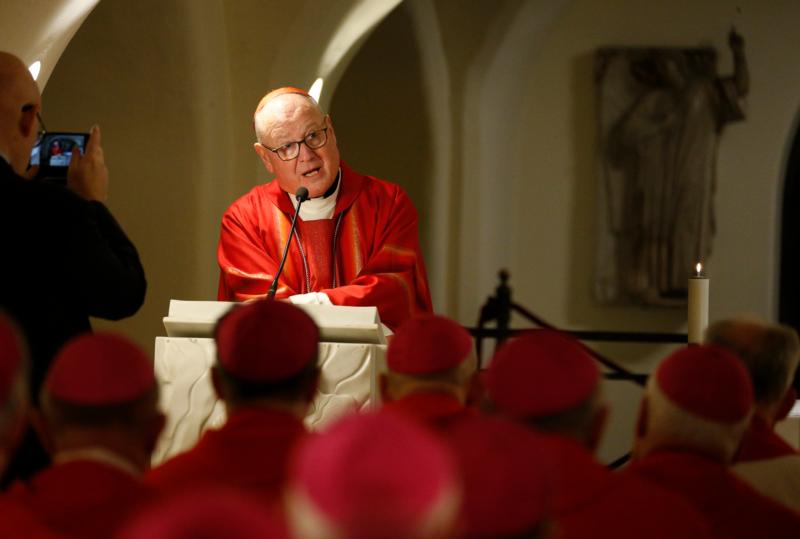 Cardinal Archbishop Timothy M. Dolan of New York gives the homily as U.S. bishops from the state of New York concelebrate Mass in the crypt of St. Peter's Basilica at the Vatican Nov. 14, 2019. The bishops were making their "ad limina" visits to the Vatican to report on the status of their dioceses to the pope and Vatican officials. (CNS photo/Paul Haring)

VATICAN CITY (CNS) — With rumors swirling around about two of their members, the bishops of New York state reached the centerpiece of their “ad limina” pilgrimage to Rome: the tomb of St. Peter.

The bishops’ early morning Mass in the grotto of St. Peter’s Basilica Nov. 14 came the morning after media reports that Bishop Nicholas A. DiMarzio of Brooklyn has been accused of sexually abusing a minor in the 1970s — a claim he strongly denied — and rumors that Bishop Richard J. Malone of Buffalo would step down after an apostolic visitation of his diocese amid claims of his mishandling of abuse allegations.

Cardinal Timothy M. Dolan of New York was the principal celebrant and homilist at the Mass for the group’s visit “ad limina apostolorum,” meaning “to the threshold of the apostles.”

The New York bishops’ Vatican visit began Nov. 11 and was to conclude Nov. 15 with a group meeting with Pope Francis and the celebration of Mass at the Basilica of St. John Lateran.

“To be here at the tomb of the first pope and tomorrow to be in the presence of his living successor in many ways is the goal or trophy” of the “ad limina” visit, Cardinal Dolan said in his homily.

Especially in a time of “difficulty,” the cardinal said, St. Peter’s life offers encouragement to the bishops because of his unwavering love for Jesus despite not always understanding exactly what Jesus meant and what he was calling his disciples to.

The descent of the Holy Spirit on Pentecost helped St. Peter, like it helped the other apostles, but as St. Peter’s disputes with St. Paul show, “he was a tad stubborn” and not always a quick study, the cardinal said. “And aren’t we all that way? We’re all that way.”

Cardinal Dolan said he often has wondered “if the moment when it all made sense for St. Peter, the moment it all came together is when his life was literally turned upside down, when he was crucified upside down.”

Crucified on Vatican hill, St. Peter would have seen symbols of the Roman Empire and its “power and clout and prestige and authority and worldly success,” Cardinal Dolan said, and he would have known that “none of it amounted to a hill of cold polenta.”

After the Mass and prayer at the tomb of St. Peter, many of the bishops went to pray at the nearby tomb of St. Paul VI.

Coincidentally, it was the day after the 55th anniversary of Pope Paul setting his tiara on the altar of St. Peter’s Basilica and renouncing the earthly power and prestige it symbolized. The pope ordered the tiara to be sold to raise money for the poor; eventually it was given to Cardinal Francis J. Spellman of New York and now is on display at the Basilica of the National Shrine of the Immaculate Conception in Washington.