Lebanese, protesting in streets, want a changing of the guard 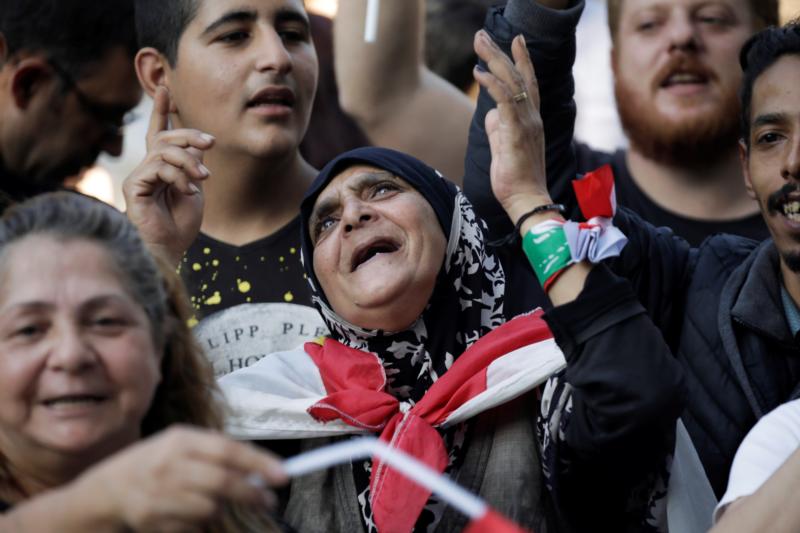 A woman reacts during an anti-government protest in Beirut Nov. 5, 2019. Hundreds of thousands of Lebanese are hitting the streets across the country to demand an end to rampant corruption and poor public services. (CNS photo/Andres Martinez Casares, Reuters)

BEIRUT (CNS) — Hundreds of thousands of Lebanese are hitting the streets across the country to demand an end to rampant corruption and poor public services. Cutting across sectarian lines, they also want the current government of entrenched politicians dating back to Lebanon’s 1975-1990 civil war era to step down.

“There is no trust in the ‘lords of the civil war,’ that’s what we call them. The way they are ruling the country since (dozens) of years, it doesn’t work anymore — sharing the power on a sectarian basis,” Tarek Serhan, a student at St. Joseph’s University in Beirut, told Catholic News Service.

“We need a new government that will pass all of that — an independent state with social justice and equality for all citizens,” he said. “Since the civil war, those ruling maybe number eight people. It’s the same faces. We don’t trust them. That’s why we want a government of independent experts to work and save this country,” he said.

Old and young alike have joined the often-festive protests. Citizens often carry national flag: red and white with the green cedar in the center.

Hundreds gathered outside the capital’s Palace of Justice Nov. 6, demanding an independent judiciary and an end to political interference.

“We don’t want judges who receive orders,” read one sign, a response to allegations that some judges receive bribes and are indebted to the reigning politicians.

“Without an independent judicial system, we won’t be able to change,” Serhan said.

The largely peaceful protests prompted the resignation of Prime Minister Saad Hariri Oct. 29. But he remains in a caretaker capacity, while political rivals haggle over the formation of a new government. Protesters say they are tired of the political “horse-trading,” the slow pace of talks, and they want fresh faces who are politically clean.

“They are still talking about sectarianism. I will give you that, if you will give me this. We are speaking a different language,” Serhan said.

The demonstrators also demand a complete overhaul of Lebanon’s sectarian-based politics. The country’s delicate religious mosaic designates the president as a Christian, the prime minister a Sunni Muslim and the speaker of parliament a Shiite.

Meanwhile, hundreds of schoolchildren staged their own anti-government demonstrations across Lebanon, refusing to return to class before the demands of a nearly three-week-old protest movement are met.

Cardinal Bechara Rai, Maronite Catholic patriarch, renewed his call Nov. 3 for the creation of a government of technocrats that is “neutral” with a limited mandate, capable of working “for the good of all Lebanese.”

Young people “have mobilized civilly,” rejecting “corruption” of the political class and “no longer accepting half-solutions,” the cardinal said in a homily. They no longer believe in empty promises and demand a new government that knows how to inspire trust by implementing reforms and achieving economic and financial growth, he said.

Cardinal Rai urged the ruling elite not to disappoint the hopes of the people and to look at the protest movement as the “fundamental engine” for the implementation of the reform plan. He called on the Lebanese to preserve national unity.

Still, a 21-year-old Lebanese university student named Corinne joined hundreds of Christian supporters of embattled President Michel Aoun that same day at a rally near the presidential palace. The political science student said that she is concerned by the protests engulfing Lebanon and she does not see sectarianism dying down.

“My president has been working for so long to get our rights back and is being attacked by several politicians in Lebanon who are responsible for the corruption here,” she told CNS.

“Lebanon is a very divided society, and sectarianism runs in the people,” she said. “In order to please, especially the Sunnis in Lebanon, Saad Hariri will likely have the post, but hopefully with the president’s certain rules and regulations.”

In his November prayer intention, Pope Francis appealed for “a spirit of dialogue, encounter, and reconciliation to emerge in the Middle East,” as popular protests swell in Lebanon, Iraq and other countries.

NEXT: Slum Jesus to be part of Rio de Janeiro’s Carnival in 2020