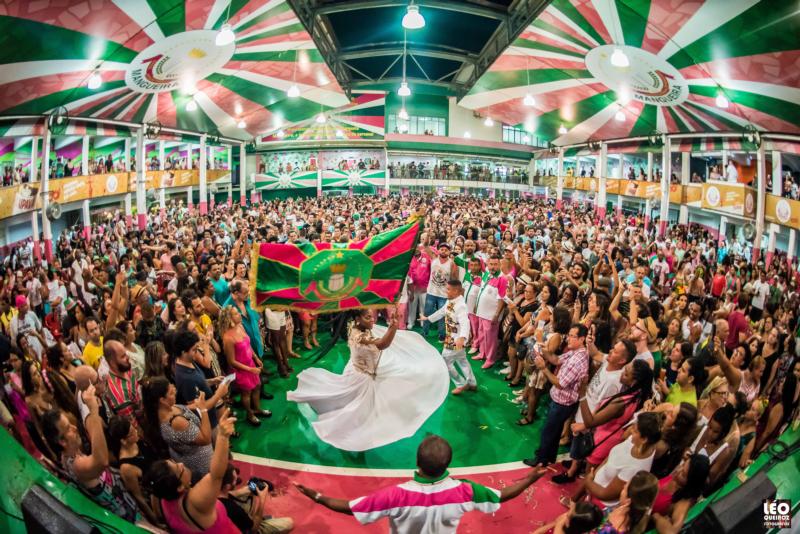 Dancers rehearse at Estacao Primeira de Mangueira, one of Brazil’s most traditional samba schools, in Rio de Janeiro. The school announced that the theme of its 2020 performance will be the story of Jesus taken to a Rio de Janeiro slum. (CNS photo/Leo Queiroz, courtesy Mangueira)

SAO PAULO (CNS) — One of Brazil’s most traditional samba schools — the popular associations that organize annual Carnival parades in the country — announced that the theme of its 2020 performance would be the story of Jesus taken to a Rio de Janeiro slum.

Estacao Primeira de Mangueira also announced its performance song, which alludes to the increasing police brutality and to the violence suffered by minorities in Brazil.

Written by the composers Manu da Cuica and Luiz Carlos Maximo, the song talks about a boy in a favela, or slum. He has a “black face, indigenous blood and the body of a woman” and is the son of an “unemployed carpenter” and of “Mary of Sorrows Brazil.”

The narrator of the song said the boy, who ages as the song progresses, struggles against oppression and can be met “where love finds no barriers.” In another part, the song says “Favela, get the vision/ There’s no future without sharing/ And no Messiah with a gun in his hand,” a possible allusion to President Jair Bolsonaro’s promises of loosening gun control legislation and of reducing punishment for police who kill suspected criminals. Bolsonaro’s middle name is Messias.

Another possible reference to Bolsonaro is the title of Mangueira’s parade theme, “The truth will set you free,” which was — with a slight difference in the Portuguese wording — one of Bolsonaro’s campaign slogans in 2018. Bolsonaro, a self-described Catholic, was elected with a strong support of evangelical Christians, and his wife — he’s in his third marriage — is a member of an evangelical denomination.

Father Antonio Manzatto, a theology professor at the Pontifical Catholic University of Sao Paulo, said Mangueira’s parade is somehow inspired by the tradition of Latin American liberation theology, a movement particularly influential in Brazil during the 1970s and 1980s; it emphasizes the church’s preferential option for the poor.

Father Manzatto said liberation theology was a central movement in the resistance against the military regime that ruled the country between 1964 and 1985.

“Now that we have a far-right government with signs of obscurantism and persecution of dissidents, Mangueira is bringing us a parade that is somehow related to the period when liberation theology emerged,” he said.

“In this sense, I think Mangueira’s theme is somehow an heir of liberation theology.”

Leandro Vieira, Mangueira’s carnavalesco — the artist who projects and supervises all the creative process involved in the parade — confirmed that the parade’s theme focuses on “Jesus’ biography in a critical way,” a concept related to “preaching the Gospel with a preferential option for the poor and defending their rights.”

“In my readings, I found a phrase that said that the great challenge of the contemporary church is not to conquer more followers, but to teach the ones who profess to be Christians to really be Christians,” Vieira told Catholic News Service.

Brazil is a Christian country, he said, but people are used to “centuries-old illnesses that take us far away from Jesus’ teachings and practices.”

“Throughout human history, the figure of Christ has been used to justify numerous atrocities. The fraternal values and unconditional love professed by Christ were not easily assimilated by society,” Vieira said.

The Brazilian Carnival festivities, particularly in Rio de Janeiro, are a multimillion-dollar event with huge cultural and economic impact. In 2019, Rio de Janeiro’s Carnival generated an income of $940 million for the city.

Political and social criticism are a usual part of some parades. In the past, samba schools were at times criticized for the inclusion of religious elements in their performances. In 1989, for instance, the Archdiocese of Rio de Janeiro obtained an injunction that forbade a samba school to parade with a replica of the statue of Christ the Redeemer characterized as a beggar.

PREVIOUS: Lebanese, protesting in streets, want a changing of the guard