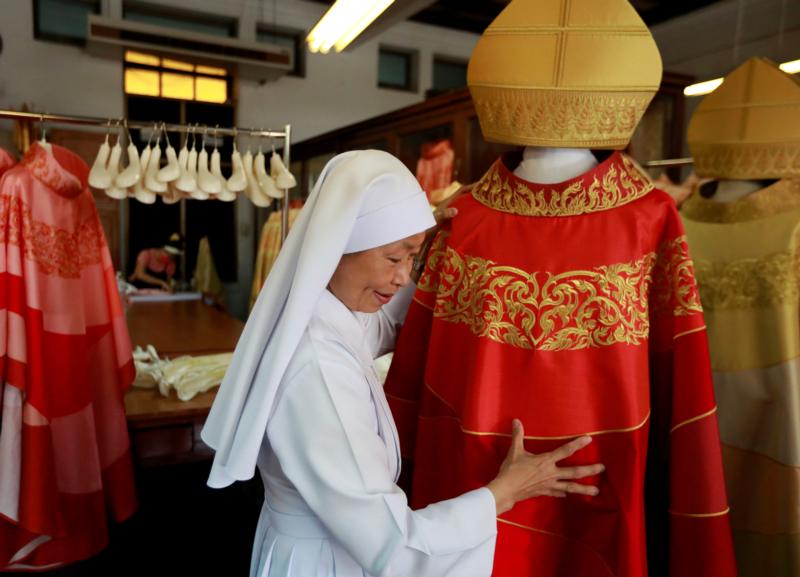 Sister Sukanya Sukchai shows newly made chasubles for Pope Francis Nov. 12, 2019, at a Catholic preparatory school in Bangkok. The pope will visit Thailand Nov. 20-23 to celebrate the 350th anniversary of the establishment of the Apostolic Vicariate of Siam Mission, the first Catholic jurisdiction in what was to become Thailand. (CNS photo/Soe Zeya Tun, Reuters)

VATICAN CITY (CNS) — The theme of Pope Francis’ visit to Thailand is focused on mission, but in the Asian country where Catholics are a tiny minority, that mission is less about proclamation and more about witness, service and dialogue.

The pope will visit Thailand Nov. 20-23 to celebrate the 350th anniversary of the establishment of the Apostolic Vicariate of Siam Mission, the first Catholic jurisdiction in what was to become Thailand.

Today the country has 11 dioceses and some 389,000 Catholics. Although Catholics make up less than 1% of the population, the church runs hundreds of schools and dozens of hospitals, clinics, homes for the elderly and orphanages. And women religious are actively involved in combatting human trafficking, especially trafficking for prostitution.

Cardinal Fernando Filoni, prefect of the Congregation for the Evangelization of Peoples, visited Thailand in May to help celebrate the anniversary and told Thai Catholics “the first form of evangelization is witness. The witness of a Christian life is the first and irreplaceable form of mission.”

And, he said, “interreligious dialogue is a part of the church’s evangelizing mission.” That does not mean hiding one’s Catholic identity or faith in Jesus as savior, but it does mean respecting the faith of others, promoting religious freedom for all and cooperating in projects that respond to the faiths’ calls to promote peace and the common good.

In that way, the cardinal said, dialogue also “contributes to explaining the social dimension of the Gospel message to those who do not know Christ and his teachings.”

More than 90% of Thais are Buddhist and close to 5% are Muslim. All Christian denominations together make up just over 1% of the population. And there are large communities of Hindus and Sikhs. Pope Francis is scheduled to meet with leaders from all the communities Nov. 22 at Chulalongkorn University.

Just three days before the pope arrives, U.S. Jesuit Father Thomas Michel will give a talk at the university’s Islamic Institute. Father Michel, a native of St. Louis with a long history of international engagement in dialogue with Muslims, now teaches and ministers at the Xavier Learning Community, a high school and college the Jesuits opened in 2017 in Chiang Rai.

Outside the city in Thailand’s far north, the community provides free or subsidized education to disadvantaged minorities, especially young people from the Karen, Akha, Lahu and Hmong peoples.

In an email response to question, Father Michel, 78, said, “After so many years, my attitude toward dialogue has evolved. Dialogue is not so much something you do or organize but is the natural outcome of living together among people who have come to respect and trust each other.”

“Muslims don’t invite me because they want to engage in dialogue, but because I am an old friend who shares many of their values and concerns,” he wrote, adding that “one Muslim friend wrote and asked if I could get him a ticket to the pope’s talk at the university, but I haven’t succeeded yet.”

“Catholics are a tiny minority in Thailand, having most of their impact in schools or hospitals,” he said. Most of the Catholics are of Chinese or Vietnamese descent or come from one of the “hill tribes,” such as the Karen or Akha.

“In our Chiang Rai diocese, for example, most of the villages are Akha, and many of them are 100% Catholic,” he said.

“In northern Thailand, there is no religious conflict between Buddhists, Muslims and Christians,” he said. Most of the Muslims in the north are of Chinese descent and fled to the region in the middle of the 19th century or soon after the communist victory in China in 1949. They found peace, tolerance and religious freedom in Thailand.

The situation in three provinces of southern Thailand is different because of the mix of ethnic, political and religious identity. Muslims make up the majority of the population in the three provinces; they are ethnic Malay and have their own language, culture and customs.

Beginning in the 1960s, in reaction to an attempt to assimilate them into the broader Thai culture, separatist movements began to form and many of them were influenced or infiltrated by fundamentalist Islamic forces. Thousands of people, both Malay and Thai, have died in sporadic outbursts of violence, including 15 people who were killed in early November.

Reacting to the multireligious, multicultural reality of Thailand, Pope Francis is expected to refer to the Document on Human Fraternity, which he signed in February with Egyptian Sheikh Ahmad el-Tayeb, grand imam of al-Azhar, a leading authority for many Sunni Muslims. The document condemns violence and urges Christians and Muslims to respect each other’s rights and promote dialogue.