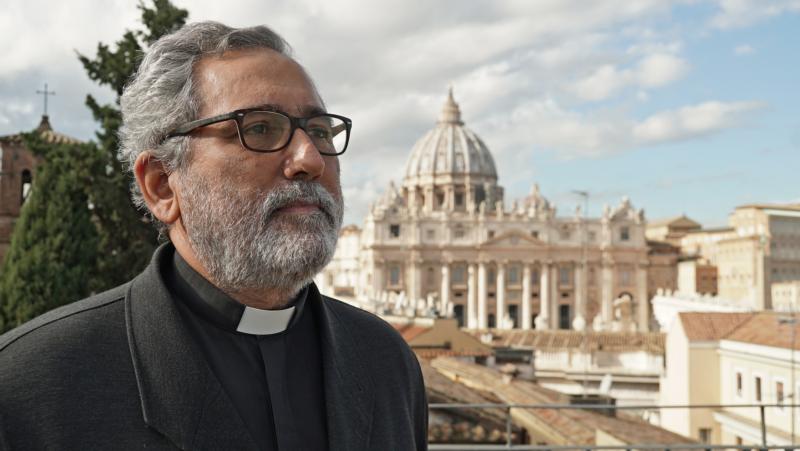 The Vatican announced Nov. 14, 2019, that Pope Francis named Jesuit Father Juan Antonio Guerrero, general counselor for the Society of Jesus, to lead the Vatican Secretariat for the Economy, which had been headed by Australian Cardinal George Pell. Father Guerrero is pictured in an undated photo. (CNS photo/courtesy Society of Jesus)

VATICAN CITY (CNS) — Pope Francis tapped a Spanish Jesuit priest with a background in economics to head the Vatican Secretariat for the Economy.

The Vatican announced Nov. 14 that the pope named Jesuit Father Juan Antonio Guerrero, general counselor for the Society of Jesus, to lead the office, which had been headed by Australian Cardinal George Pell.

Cardinal Pell took a leave of absence in 2017 to return to Australia to face charges of sexually abusing minors. His five-year term as head of the secretariat expired in February, a few months after a jury found him guilty of the charges.

Born in Merida, Spain, in 1959, the newly appointed prefect entered the Jesuit order at the age of 20 and was ordained to the priesthood in 1992. He holds degrees in economics, philosophy and theology.

Father Guerrero, who has served in various Jesuit missions in his native Spain and abroad, including as treasurer of the Society of Jesus in Mozambique, will take over as prefect in January, the Vatican said.

In an interview with Vatican News published shortly after the announcement, Father Guerrero said his appointment as prefect of the secretariat was “something completely unexpected.”

“Initially, it filled me with anxiety, and I felt quite numb,” he said. “But I welcome it with humility, with confidence in the Lord and in the team that is already working in the Secretariat for the Economy. I will collaborate in the service of this mission by offering the best of myself.”

Jesuit Father Arturo Sosa, superior general of the Society of Jesus, said that when the pope requested Father Guerrero for the position, “I welcomed it with openness and availability.”‘

However, according to Vatican News, Father Sosa requested that the appointment “not be associated with the episcopate” — in other words, that Father Guerrero not be ordained a bishop — so that he could return “after finishing his mission to his normal life as a Jesuit.”

“I thank the Holy Father for allowing me to carry out this mission as a Jesuit, so that I can continue to remain a Jesuit when this service ends,” Father Guerrero told Vatican News.

“My desire is to get to know and to begin to work with the team at the Holy See’s Secretariat for the Economy,” he said. “I hope to contribute to the economic transparency of the Holy See and to help to use efficiently the goods and resources that are at the service of the important evangelizing mission of the church.”