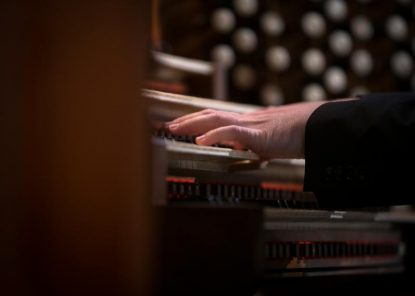 Organist Johann Vexo of Paris rehearses April 25, 2019, the Basilica of the National Shrine of the Immaculate Conception in Washington. Liturgical musicians have the unique calling to interpret God’s will and love through song and praise, Pope Francis said Nov. 9 during a meeting with participants at a Vatican conference on interpreting sacred music. (CNS photo/Tyler Orsburn)

VATICAN CITY (CNS) — Liturgical musicians have the unique calling to interpret God’s will and love through song and praise, Pope Francis said.

“Every Christian, in fact, is an interpreter of the will of God in his or her own life, and by his or her life sings a joyful hymn of praise and thanksgiving to God,” the pope said Nov. 9 during a meeting with participants at a Vatican conference on interpreting sacred music.

Reflecting on the conference theme, the pope said most people think of interpreters as a kind of translator who conveys what “he or she has received in such a way that another person can understand it.”

Although good interpreters in the field of music essentially “translate” what a composer has written, they also should feel “great humility before a work of art that is not their property,” and to “bring out the beauty of the music.”

Within the context of the liturgy, he added, music is a way for Christians “to serve others through the works they perform.”

“Every interpreter is called to develop a distinctive sensibility and genius in the service of art which refreshes the human spirit and in service to the community,” the pope said. “This is especially the case if the interpreter carries out a liturgical ministry.”

Pope Francis thanked the participants for their commitment and — citing the words of his predecessor St. Paul VI — said that music ministers have the great task of “grasping treasures from the heavenly realm of the spirit and clothing them in words, colors and forms, thus making them accessible.”

“The artist, the interpreter and — in the case of music — the listener, all have the same desire,” the pope said: “To understand what beauty, music and art allow us to know of God’s grandeur. Now perhaps more than ever, men and women have need of this. Interpreting that reality is essential for today’s world.”