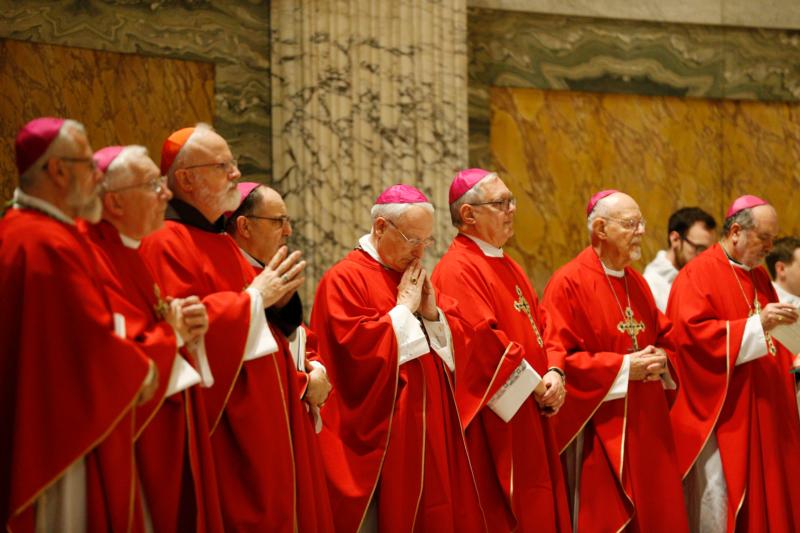 U.S. bishops from the New England States concelebrate Mass at the Basilica of St. Paul Outside the Walls in Rome Nov. 5, 2019. The bishops were making their “ad limina” visits to the Vatican to report on the status of their dioceses to Pope Francis and Vatican officials. (CNS photo/Carol Glatz)

ROME (CNS) — When U.S. bishops from New England gathered in the Basilica of St. Paul Outside the Walls to celebrate Mass and pray at the apostle’s tomb, it was called “a blessing” that the day’s reading would be St. Paul’s Letter to the Romans.

“How striking it is for us to hear Paul’s words to the people of this city as we gather this afternoon,” Bishop Robert P. Deeley of Portland, Maine, said in his homily during the Mass Nov. 5 at the Rome basilica.

The bishops of Massachusetts, Rhode Island, Connecticut, New Hampshire, Maine and Vermont were in Rome for their visits “ad limina apostolorum” — to the threshold of the apostles.

Their trip Nov. 4-8 also was to include numerous meetings at Vatican offices and with the pope, to report on their dioceses and, as Bishop Deeley said in his homily, to be strengthened in their mission as successors of the apostles.

The bishops, wearing bright red vestments, prayed at the tomb of St. Paul after concelebrating Mass.

In his homily, Bishop Deeley noted how St. Paul developed a sort of “theology of Jesus” in his Letter to the Romans.

The apostle reminded his listeners “that faith in Jesus is not just a set of propositions,” but is an encounter and a relationship that radically changes people’s lives, the bishop said.

Just as the first disciples were changed by their encounter with the Lord, “faith changes us,” he said. “We are called to recognize our oneness in Christ” and God’s generosity.

Recognizing that shared experience builds unity as does using one’s gifts for the good of each other, he said, reflecting on Romans 12:5-16, which begins, “We, though many, are one body in Christ and individually parts of one another.”

Bishop Deeley said that as bishops they also must recognize the gifts among the people they serve and see how they can help further the church’s mission and build up the people of God.

He asked that their pilgrimage and prayers at “these holy places” and their talks with Pope Francis would “strengthen us in our ministry.”

“It is a pilgrimage we do together, and it reminds us that we rely” on one another, he added.