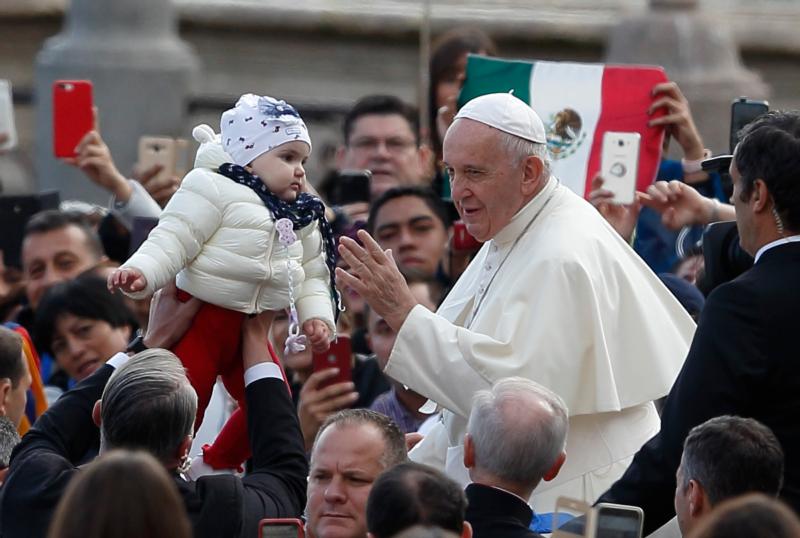 A guard lifts a baby for Pope Francis to greet as the pope leads his general audience in St. Peter’s Square at the Vatican Nov. 6, 2019. (CNS photo/Paul Haring)

VATICAN CITY (CNS) — Christians who preach the Gospel must see people who do not know Christ as children of God and not as nonbelievers worthy of hostility and contempt, Pope Francis said.

The example of St. Paul’s mission in Greece and his encounter with the pagan culture there serves as a reminder that Christians should “create a bridge to dialogue” with other cultures, the pope said Nov. 6 during his weekly general audience.

“Paul does not look at the city of Athens and the pagan world with hostility but with the eyes of faith,” he said. “And this makes us question our way of looking at our cities: Do we observe them with indifference? With contempt? Or with the faith that recognizes children of God in the midst of the anonymous crowds?”

Continuing his series of talks on the Acts of the Apostles, the pope focused on St. Paul’s visit to Athens, a city that “still held the primacy of culture” and was “full of idols.”

According to tradition, St. Paul preached to the Athenians at the Areopagus, an area that was not only a symbol of Greek political and cultural life but also the location of an altar to the “unknown god.”

The paganism of the Greeks did not cause the apostle to flee, the pope explained. Instead, “Paul observes the culture and environment of Athens from a contemplative gaze that sees God dwelling in their homes, in their streets and squares.”

“In the heart of one of the most famous institutions of the ancient world, the Areopagus, he realizes an extraordinary example of inculturation of the message of the faith,” the pope said. “He proclaims Jesus Christ to idol worshippers and doesn’t do it by attacking them, but by making himself a ‘pontiff,’ a builder of bridges.”

The apostle, he continued, “takes his cue from the altar of the city dedicated to the unknown god” and engages with the Athenians with “empathy,” declaring that he is preaching in the name of the one they “worship without knowing it.”

Citing Pope Benedict XVI, Pope Francis said that in doing so, St. Paul is not proclaiming the unknown god but rather “proclaiming him whom men do not know and yet do know — the unknown-known.”

In this way, St. Paul can announce the message of salvation, “the kerygma,” by alluding “to Christ without citing him, defining him as the man whom God has chosen,” he said.

Pope Francis concluded his talk by asking Christians to ask the Holy Spirit to “teach us to build bridges with culture, with those who do not believe or with those who have a different creed from ours.”

“Let us ask him for the capacity to delicately inculturate the message of faith, placing a contemplative gaze on those who are ignorant of Christ, moved by a love that warms even the most hardened hearts,” the pope said.