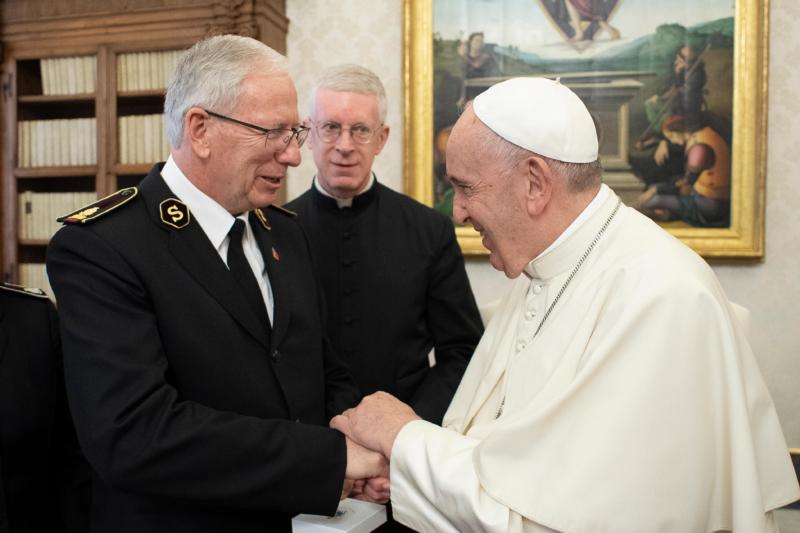 VATICAN CITY (CNS) — Loving acts of service and charity not only help build up the Kingdom of God, they attract and influence others, Pope Francis said.

Young people in particular need to witness Christians helping others “since in many cases it is absent from their daily experience,” he said.

“In a world where selfishness and divisions abound, the noble fragrance of genuine self-giving love can offer a much-needed antidote and open minds and hearts to the transcendent meaning of our existence,” the pope said.

Pope Francis spoke Nov. 8 during a meeting with a delegation of the Salvation Army, led by its international representative and CEO, General Brian Peddle.

The pope thanked the members and volunteers of the Salvation Army, a Christian denomination and worldwide charitable organization. Pope Francis also made special mention of their work fighting against human trafficking and other forms of modern slavery.

“Holiness transcends denominational boundaries,” the pope said, quoting a comment made by the former leader, General Andre Cox, during his audience with the pope in 2014.

“The holiness that shows itself in concrete acts of goodness, solidarity and healing speaks to the heart and testifies to the authenticity of our discipleship,” the pope told Peddle in his address.

“On this basis, Catholics and Salvationists can increasingly assist one another and cooperate in a spirit of mutual respect,” he added.

“The gratuitous love that inspires acts of service to those in need is not only a leaven,” which, like the parable says, makes a large mass of dough rise, it releases “the fragrance of freshly baked bread. It attracts and convinces,” and “young people in particular need to breathe in that fragrance,” the pope said.

“Let us remember one another in our prayers and continue to work together to spread God’s love through works of service and solidarity,” he said.

The pope reminded the delegation of the impact made on him as a young boy when he saw two women from the Salvation Army on the streets in Argentina and his grandmother praised them as being good even though she had a bias against Protestants in general.

“It was by encountering members of the Salvation Army that I received, many years ago, from my grandmother, my first lesson in ecumenism,” the pope said. “Their example of humble service to the least of our brothers and sisters spoke louder than any words.”

PREVIOUS: Christians are called to serve Christ in the poor, pope says

NEXT: English cardinal: Priests would die rather than break seal of confession