English cardinal: Priests would die rather than break seal of confession 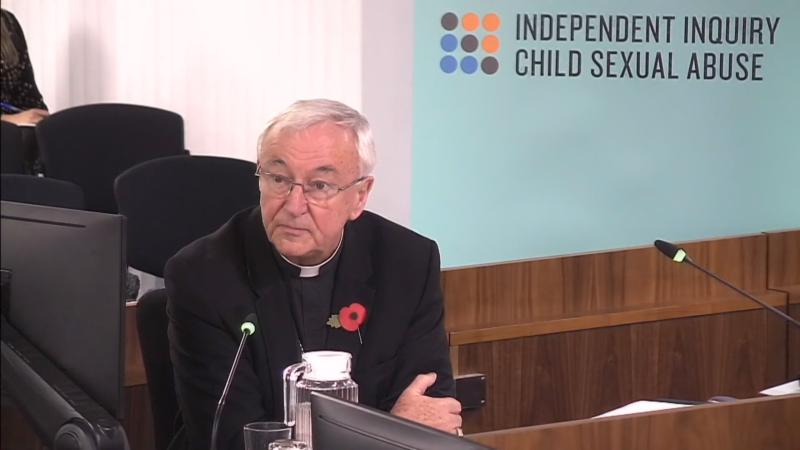 Cardinal Vincent Nichols of Westminster is seen in a screen grab talking to the Independent Inquiry into Child Sex Abuse Nov. 7, 2019. He said the English and Welsh bishops would reject any attempts to compel priests to report Catholics who confess to committing sexual abuse. (CNS screen grab)

MANCHESTER (CNS) — Catholic priests would die rather than break the seal of confession to report child abusers to the police, said an English cardinal.

Cardinal Vincent Nichols of Westminster told the Independent Inquiry into Child Sex Abuse that the English and Welsh bishops would reject any attempts to compel priests to report Catholics who admit to committing sexual abuse during confession.

“The history of the Catholic Church has a number of people who’ve been put to death in defense of the seal of confession,” he continued. “It might come to that.”

“But the seal of confession is of a sacred nature and it’s at the heart of the priest ministry acting in the name of the Father, and of the Son and of the Holy Spirit.”

Brian Altman, a lawyer for the inquiry, asked Cardinal Nichols, president of the Bishops’ Conference of England and Wales, how the church would respond if mandatory reporting of penitents who confessed to abuse were introduced.

“If this inquiry, and I am not saying it will, were to recommend, as did the Royal Commission in Australia, breaking the seal of confession, would it be well received by the bishops’ conference?” Altman asked.

Cardinal Nichols replied: “It would not be well received. It would be rejected.”

He said mandatory reporting would “put every priest in this country in a position of great liability, because a priest would not be able to defend himself if somebody went forward and said, ‘I told Father X that I’m an abuser.'”

He said: “Anybody could do that and no priest could defend himself. Therefore, I hope you consider very carefully this matter.”

The cardinal added that he never heard anyone confess to abuse during his ministry as a priest and bishop.

Cardinal Nichols also was questioned over the treatment of a woman, referred to as A710. Ten years ago, she accused Cardinal Cormac Murphy-O’Connor of abusing her. Cardinal Murphy-O’Connor died in 2017.

Cardinal Nichols said police found “no corroborative evidence” and the Crown Prosecution Service dismissed the case because it was so weak. An investigation by the Congregation for the Doctrine of the Faith was subsequently halted.

The inquiry heard that details of the case, including some which could have identified the woman, were leaked by sources in Italy and England to conservative Catholic media outlets in 2018, along with the claim that Pope Francis personally halted the Vatican investigation into the allegations.

Bishop Peter Doyle of Northampton, who had been A710’s parish priest and who found her convincing, wanted to issue a statement in support of her credibility while declining requests for interviews from media.

But the inquiry heard that the statement was withheld after Alexander DesForges, head of public relations for the bishops’ conference, called Bishop Doyle to warn him it would invite unwarranted media interest into the complainant.

According to Bishop Doyle, DesForges also said the proposed statement would be used by media internationally to attack Pope Francis, who by that time was facing severe criticism from Archbishop Carlo Maria Vigano, the former nuncio to the U.S., for allegedly failing to combat corruption.

Cardinal Nichols told the inquiry it was an “evident and obvious fact” that such a statement would be used against the pope.

“The whole of this publicity, from its very beginnings, from its source in 2013, was part of a concerted effort to attack Pope Francis,” he said. “That was not going to change. It would still be the case.”

Cardinal Nichols told the inquiry the well-being of A710 was not his “sole concern, it was my substantial concern,” although Altman suggested to him that protecting the pope might appear as his priority to the complainant.

NEXT: Concern for inmates, prison reform is obligatory act of mercy, pope says