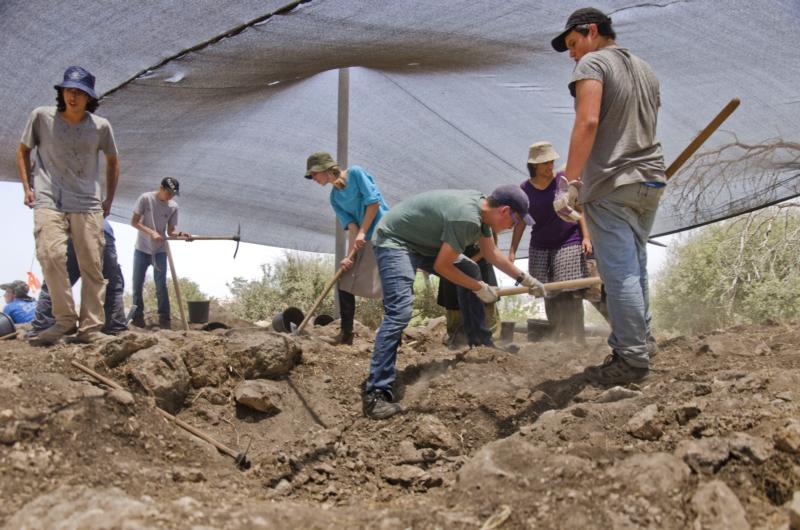 Thousands of young people have participated in the excavation of a Byzantine church complex in Beit Shemesh, Israel, over the past three years. (CNS photo/Yoli Schwartz, courtesy Israel Antiquities Authority)

The churches, according to Catholic archaeological scholars in Jerusalem, were most likely sites of veneration for local Christians rather than for pilgrims from abroad.

“Most people only think about pilgrims coming from outside, but local pilgrimage was also important in Byzantine times, as it is today,” said Franciscan Father Eugenio Alliata, archaeology professor at the Studium Biblicum Franciscanum. “These discoveries are very important (in that they) show that many local people were visiting these places and venerating these holy places.”

Both of the complexes include two separate church buildings.

One of the complexes is a well-preserved Byzantine-era church complex uncovered by the Israel Antiquities Authority just outside of Jerusalem near the Israeli city of Beit Shemesh. A 10-line inscription, found intact in a floor mosaic in the courtyard, dedicated the church to a “glorious martyr.”

Benjamin Storchan, director of the Beit Shemesh excavation on behalf of the Israel Antiquities Authority, said although the martyr’s identity is not known, the extraordinary splendor of the structure and its inscriptions indicate the person was an important figure in early Christianity and was well-known by early pilgrims of the nascent faith.

He noted that in Byzantine times, it was customary to hold only one Communion ceremony per day in a chapel, and he conjectured that having two churches allowed more pilgrims to receive the Eucharist.

Father Alliata said another church dedicated to Zacharias, the father of John the Baptist, was discovered earlier in Khirbet Midras, also in the Beit Shemesh area, and is mentioned by sources, including Byzantine-era Greek church historian Sozomen.

Unfortunately, he said, that site was vandalized by some ultra-Orthodox residents of Beit Shemesh. 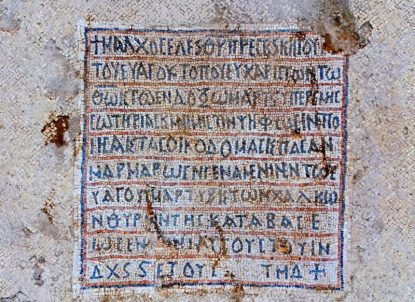 “You can find (remains of) churches (all over) Israel,” said Father Alliata. “Especially during the Byzantine time, it was rich in settlements and rich in religious places. In some places there were synagogues and in other places there were more churches.”

The other two churches recently uncovered, whose ruins were less well-preserved, are located in Khirbet et-Tireh, west of Ramallah, West Bank, and are being excavated by Salah Hussein Al-Houdalieh of The Institute of Archaeology at the Palestinian Al-Quds University in Jerusalem, in cooperation with the Greek Orthodox Patriarchate.

Khirbet et-Tireh was inhabited during the Hellenistic, Roman, Byzantine and early Islamic periods and was later used as agricultural land throughout the Ottoman-Turkish period and down to modern times, said Al-Houdalieh.

However, 75 percent of its historic fortified space has been destroyed over the past few decades by development construction. Among the surviving architectural structures are a Byzantine monastery and two Byzantine-era churches.

The entire area of the church was once paved with mosaic carpets of richly colored stones. Al-Houdalieh said human remains discovered at the site were transported in 2015 in a solemn funeral procession to the Greek Orthodox Church in Ramallah; they were reinterred there.

The “Glorious Martyr Church,” as the church in Beit Shemesh is being called, is among the few churches in Israel discovered with fully intact crypts, Storchan said.

“The crypt was accessed via parallel staircases: one leading down into the chamber, the other leading back up into the prayer hall. This enabled large groups of Christian pilgrims to visit the place,” he said.

Storchan said the vaulted double stairway indicates the church had once been a major pilgrimage site for early Christians and is similar in construction to that of the double staircase at the Church of the Nativity in Bethlehem.

Noting the well-preserved state of the church, Jesuit Father Josef Mario Briffa, a lecturer of archaeology at the Pontifical Biblical Institute in Jerusalem, said it was clear that the church had been abandoned by its inhabitants rather than ravished or destroyed by outside forces.

Storchan noted the systematic storage of liturgical elements and other items they found in the back of the church.

“We see how they thought to close up and try to separate material in an organized way,” he said. “The last people here closed the door. It is as if they knew they had to go, and closed it and hoped they would be back.”

All the entrances were found blocked and sealed with large stones, he said.

Al-Houdalieh has suggested that Khirbet et-Tireh could be the burial site of St. Stephen, the first deacon and martyr of the church of Jerusalem; however, traditionally it is believed that his tomb was at the Salesian monastery in Beit Jamal, just outside of Beit Shemesh.

Father Alliata said it is likely that the churches in Khirbet et-Tireh were dedicated to St. Stephen. The churches were most probably places for local Christians to venerate the saint, he said, without making what was then an arduous journey to Jerusalem.

Father Briffa said that, during the Byzantine period, local Christians needed to feel a part of the pilgrimage routes.

He said one of the more important points of the two excavations is that they are not being conducted by Christian archaeologists but by Jewish and Muslim archaeologists.

“This is not just of interest just for Christian archaeologists or just Christians. This is the religious heritage of the Holy Land in a wider sense,” he said.

NEXT: Do more to fight poverty, say European bishops, Caritas