Jesuits recommit to ‘bold’ ministry for people at frontiers 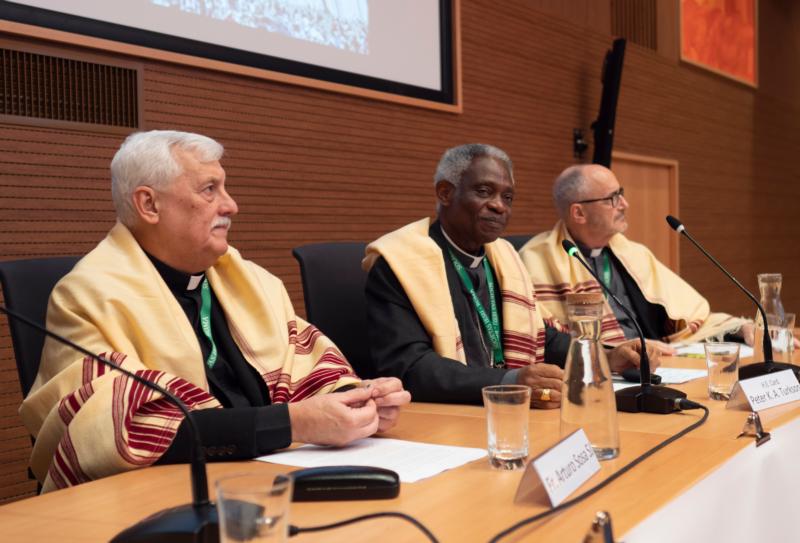 ROME (CNS) — Celebrating 50 years of the Jesuits’ Social Justice and Ecology Secretariat, more than 200 Jesuits and their collaborators met in Rome to give thanks for the past, study the present and discern the future.

A big part of the present and future, they said, relies on ministering to young people — especially the poor — and educating young men and women to be responsible citizens committed to promoting the common good by working for justice and safeguarding creation.

Jesuit Father Arturo Sosa, superior general of the order, opened the meeting Nov. 4 by encouraging the Jesuits and the lay men and women who work with them to seize “this special moment in which God is again speaking to us and inviting us to remember, to thank, to discern and to take audacious, bold and risky decisions to accompany Jesus and his people at the frontiers, together with the most excluded, poor and vulnerable.”

Speaking to reporters later that day, Father Sosa said the papally approved “apostolic preferences” of the order — teaching discernment, walking with the excluded, journeying with young people and protecting creation — must be reflected in every ministry the Jesuits engage in.

With so many of its members teaching in high schools and universities or engaged in research, Father Sosa said, analyzing situations of injustice and helping young people apply Gospel principles to politics and social engagement is important work.

One of the consequences of the current global scene, which seems to be undergoing “an epochal change,” he said, “is the weakening of democracy. And from our experience over many years, we are convinced that without democracy, social justice is almost impossible,” because justice requires that people be given a voice in the decisions impacting them.

And, he said, “being a Christian means being a citizen, being responsibly involved in the search for the common good.”

Christopher G. Kerr, executive director of the Ignatian Solidarity Network, which organizes the annual Ignatian Family Teach-in for Justice, said the key is helping young people answer the call “to be a person of faith who acts with justice for the long haul.”

“A lot of what disenfranchises young people are the very short-term realities of political campaigns and specific issue-oriented campaigns” that end with an election, he said. The teach-ins introduce young people to issues and to lobbying on Capitol Hill, but from the perspective of Christian values that “last a lifetime.”

“We apply the Gospel not just once in our life, but throughout our life,” he said. That should go for a Christian’s political involvement as well as his or her spiritual life.

Cardinal Michael Czerny, who once headed the Jesuits’ social justice office, encouraged participants to look at the ministry of Pope Francis and at the discussions of the Synod of Bishops for the Amazon and how they coincide with the Jesuits’ apostolic preferences.

“What I have learned from Pope Francis is that ‘pastoral’ means much more than ‘parochial,'” he said. “Yes, the sheep whom we find in our flock today require humble, energetic, courageous and self-sacrificing care. But many are lost in the peripheries, some have turned away from safe pastures. They are poor and imperiled” and the church must go out to find them.

And, as far as the young go, Cardinal Czerny said many of them no longer “proceed into faith via catechism and rituals from an early age. Instead, if they meet the church at all, it is likelier to be when joining with believers who share their urgency about society and the environment, and so the social apostolate is crucial for reaching out to youth.”

Father Sosa also spoke to the assembly and to reporters later about how the commitment to working for justice and peace was a strong part of “very few” Jesuits’ work 50 years ago and slowly grew to become part of almost every Jesuit ministry.

But there were years, he said, when there were “fewer Jesuits specialized in the social sphere and fewer Jesuits living in communities in the midst of the poor.” However, he added, the tide is changing, especially in service to refugees and migrants and thanks to the commitment of the Jesuits’ lay collaborators.

In advance of the gathering, Father Xavier Jeyaraj, Jesuit secretary for social justice and ecology, told reporters that when the general congregation of the Jesuits decided in 1974-75 to make a commitment to “a faith that does justice,” Father Pedro Arrupe, the superior at the time, “said we must be willing to pay the cost.”

For some, the cost was their lives, he said. And the November meeting honored 57 Jesuits killed in the past 50 years for their Gospel commitment to justice and to the poor. The commitment also brought criticism, including from some church leaders, and led to some disagreements within the order itself.

“It is important to understand that we have been discerning,” Father Jeyaraj said; some Jesuits felt called to live poor with the poor and wanted to shed ownership of large institutions, while others saw social value in using the order’s universities to impact policy.