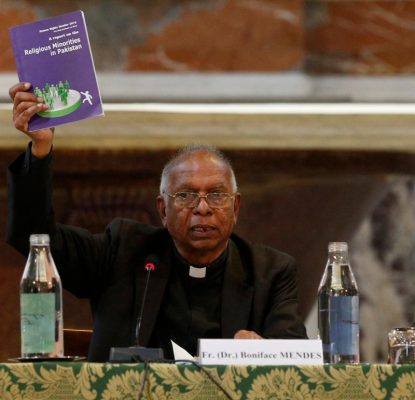 Father Boniface Mendes of the Diocese of Faisalabad, Pakistan, holds up a report during the presentation of the U.K. Independent Review on Persecution of Christians in Rome July 15, 2019. Pakistani Christian asylum-seekers who fled their homeland in fear for their lives may not attend a Bangkok papal Mass Nov. 21 for fear of being detained by authorities. (CNS photo/Paul Haring)

BANGKOK (CNS) — When Pope Francis celebrates Mass in a Bangkok sports stadium Nov. 21, tens of thousands of Catholics from across Thailand will be there to celebrate with him.

Several devout Catholics may not be among them, however much they might love to join. Ucanews.org reported that by venturing outdoors to attend the Mass in person, these believers would run the risk of being detained by authorities.

They are Pakistani Christian asylum-seekers who fled their homeland in fear for their lives in recent years. They were driven away by the increasingly militant form of Islam that has come to dominate the public sphere in Pakistan, putting further restraints on the rights and freedoms of religious minorities.

These Christians, many of whom are Catholic, live in Bangkok, waiting for a chance to relocate to a welcoming third country. Because they are not recognized as bona fide refugees in Thailand, they are regarded as illegal migrants who are subject to arrest and deportation.

“Any time we go outside, we could be arrested,” said a man identified only as James, an asylum-seeker from Lahore, Pakistan, who works part time, illegally, as an interpreter for a Bangkok-based Catholic organization.

“We are suffering. It’s very difficult. I’ve been in Bangkok for nearly seven years. It might take another year and a half before I can leave (for a third country).”

But James said he will attend the Mass to see the pope.

“I’ll be there,” he stressed. “I think every Catholic should be there.”

To avoid being incarcerated in overcrowded immigration detention centers, asylum-seekers like James are hiding in small apartments in low-rent condominiums, doing their best to stay out of sight. Even when they venture outdoors — to stock up on groceries at nearby convenience stores — they do so only briefly, lest they bump into immigration police officers on their patrols.

“I only go out at night, after 10 p.m. or 11 p.m., when there are fewer people on the streets,” James said. “When you live like us, you have a constant fear in your mind that makes you paranoid. You keep looking over your shoulder, thinking everyone is staring at you. It’s very damaging psychologically.”

Another Pakistani Catholic asylum-seeker who lives in Bangkok told ucanews.org: “I don’t know if I can go and see His Holiness. … If I go there and (the authorities) stop me, that will be a big problem for me, because I don’t have any documents.”

He fled Karachi after he was accused of defaming Islam, a capital offense in the conservative Muslim nation. He arrived in Thailand on a tourist visa, which has long since expired. He lives frugally on monthly handouts and food packages from Christian charities.

If he does decide not to attend the Mass, he will be able to follow it from a distance because it will be broadcast live on a Thai television channel.

“If I could meet Pope Francis in person, I’d ask him to please help us,” he said. “Pope Francis often speaks up for refugees. Maybe he could do that for us, too.”

Some church officials estimate there could be as many as 1,500 Christians from Pakistan living around Bangkok; most do not have refugee status.

“We’re very excited he’s coming,” said another asylum-seeker who lives with his family in a tiny studio apartment in a working-class area of eastern Bangkok. “I really want to meet the Holy Father and tell him about the situation in Pakistan and our situation in Bangkok. But I know it’s impossible.”

Some asylum-seekers are considering taking their chances to attend the Mass so as to be near Pope Francis.

“If it’s possible for me, I’ll go,” said a Catholic electrician from Islamabad who has been staying in Bangkok since 2013. “If I could speak to him, I would ask the Holy Father, ‘Please help us get to a safe haven like you have helped Syrian Muslims.'”

The electrician was referring to the pope’s championing of Muslim migrants to Europe from countries like Syria. In recent years, Pope Francis has repeatedly called on Europeans and their nations’ governments to welcome the more than 1 million migrants from the Middle East and Africa who have been flocking to the continent in droves with the aim of seeking asylum.

“If Pope Francis raises the issue (of our plight) in Bangkok, it could make a big difference for our community,” said the asylum-seeker from Islamabad. “It would be very helpful to us.”

PREVIOUS: Jesuits recommit to ‘bold’ ministry for people at frontiers

NEXT: Dialogue begins with empathy, not contempt, pope says