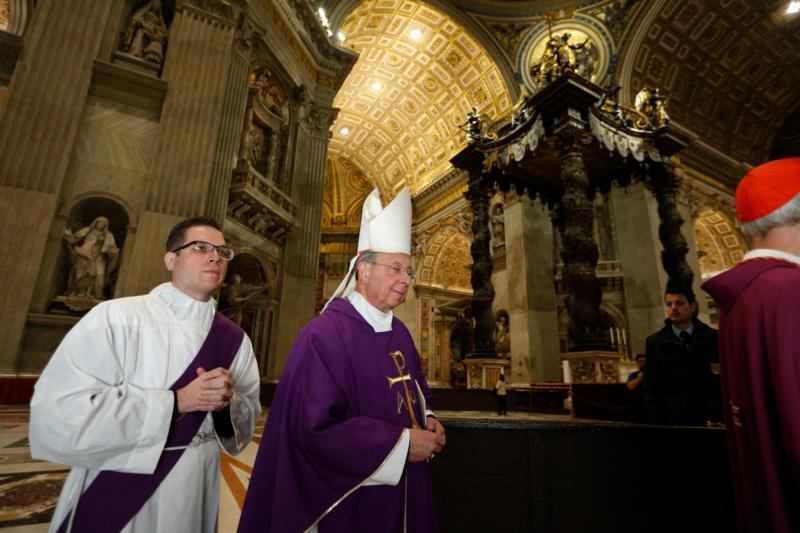 Archbishop William E. Lori of Baltimore arrives to concelebrate a Mass with U.S. bishops from the District of Columbia, Delaware, Maryland, Virginia, the U.S. Virgin Islands, West Virginia, and the Military Archdiocese in the crypt of St. Peter’s Basilica at the Vatican Dec. 2, 2019. The bishops were making their “ad limina” visits to the Vatican to report on the status of their dioceses to the pope and Vatican officials. (CNS photo/Paul Haring)

VATICAN CITY (CNS) — The example of St. Peter and the teaching of his successor encourage bishops to serve their flocks “willingly and generously,” Archbishop William E. Lori of Baltimore said.

Archbishop Lori, who was appointed earlier this year to investigate allegations of sexual and financial improprieties made against Bishop Michael J. Bransfield, former bishop of the Diocese of Wheeling-Charleston, West Virginia, said Pope Francis also “warns us against using our ministry for financial gain or personal comfort.”

It is “a warning that resonates loud and clear among us,” he said. “Thus Peter, and his successor, Francis, call us to simplicity of life, a pastoral poverty that enables us to keep the poor always in focus.”

Archbishop Lori was the principal celebrant and homilist at a Mass celebrated Dec. 2 at the tomb of St. Peter with the bishops of the District of Columbia, Delaware, Maryland, Virginia, the U.S. Virgin Islands, West Virginia and the Archdiocese for the Military Services.

The bishops were in Rome for their visits “ad limina apostolorum” — to the threshold of the apostles — to report on the status of their dioceses.

In his homily in the grotto of St. Peter’s Basilica, Archbishop Lori reflected on the Gospel reading in which Jesus asks his disciples what people are saying about him and who he is.

Jesus, he said, engages “in a bit of popular polling” at first before putting “his followers on the spot.”

St. Peter’s response that Jesus was “the son of the living God” was not only correct, but a revelation from God and a response that made him “the unshakeable rock upon whom (Christ) built his church,” the archbishop explained.

“In these days, when we are buffeted by challenges on every side, in these days, when many say that the bottom is dropping out of our church,” he said, “our hearts should rejoice, and our spines should be stiffened. And in this place, we hear anew the solid promise of Jesus: that the forces of sin and death will not prevail against his church.”

Through his promise, Archbishop Lori added, Jesus does not ask bishops “to be optimists but rather witnesses of hope, ministers of word and sacrament and charity who put our absolute trust in him.”

Like St. Peter, who despite his failings led the nascent church until his martyrdom, bishops must understand that their mission is one of service and “not to hoard our authority over others nor to think too highly of ourselves and the positions we find ourselves in.”

Instead, bishops must exercise their ministry “in partnership with priests, deacons, religious and lay women and men, working to become what Francis calls a synodal church, a church that listens and learns,” he said.

Archbishop Lori prayed that the bishops would be “rooted and grounded in love, in comprehending and proclaiming the height and depth and length and breadth of Christ’s love for the glory of God, for the good of the church and for the salvation of souls.”

PREVIOUS: Duluth bishop dies after heart attack; he was ‘greatly loved’ by all

NEXT: Trajectory of hateful rhetoric led to Holocaust, say speakers