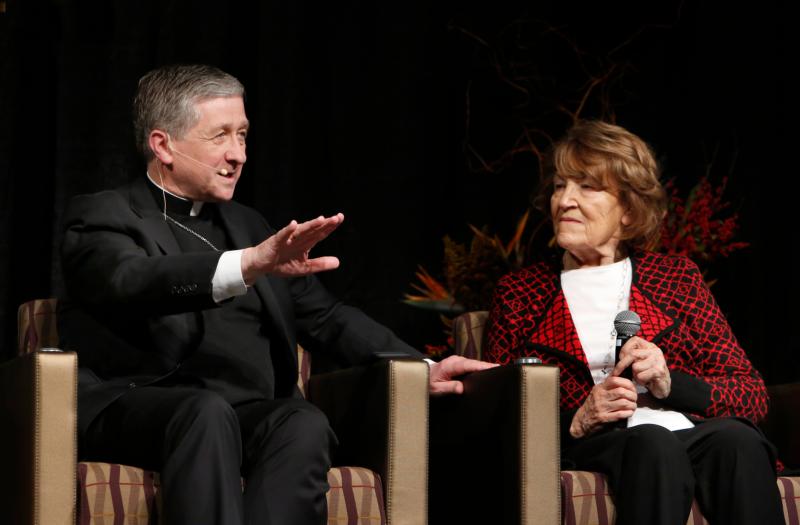 Chicago Cardinal Blase J. Cupich chats with Holocaust survivor Fritzie Fritzshall, president of the Illinois Holocaust Museum & Education Center, during a Nov. 18, 2019, talk at Loyola Academy in Wilmette about their July visit to Auschwitz and make the point that the horror of the Holocaust started with hateful rhetoric. (CNS photo/Karen Callaway, Chicago Catholic)

WILMETTE, Ill. (CNS) — Hate speech must be stopped “in its tracks,” Chicago Cardinal Blase J. Cupich said in remarks during an interfaith dialogue at Loyola Academy in the Chicago suburb of Wilmette.

The cardinal joined Holocaust survivor Fritzie Fritzshall and Chicago ABC7 news anchor Alan Krashesky in talking about their July visit to Auschwitz, the concentration camp operated by the Nazis in occupied Poland, and to make the point that the horror of the Holocaust started with hateful rhetoric.

During their visit, Fritzshall, president of the Illinois Holocaust Museum and Education Center, asked Cardinal Cupich as a religious man, a man of God, how such things could happen. At the time, the cardinal had no answer.

About a month later, he wrote a column titled “Words Matter,” published July 28 in the Chicago Catholic, the archdiocesan news outlet.

It took some time for him to formulate his response, Cardinal Cupich told over 800 people who attended the mid-November dialogue in Wilmette.

“I reflected on it, and there is an answer,” Cardinal Cupich said. “It happens in the human heart when we begin to criticize people, marginalize them, and then eventually call them ‘other,’ ‘alien,’ to ourselves.

“Then we begin to look at the ills of society, and there’s always the tendency to scapegoat, and so we scapegoat those people who are other as the reason for our problems. It becomes a lot easier then to get rid of the scapegoat. That’s what a scapegoat is.”

He explained that “there is a dynamic that happens. It just doesn’t happen overnight.”

“That’s why right away we have to stop the words,” the cardinal said. “We have to stop the hate speech in its tracks, lest it begin to define people as ‘other,’ and that other becomes the enemy that we have to get rid of. There is a trajectory to those words that we can’t ignore.”

Krashesky said that when he first learned of the trip, he immediately thought it was newsworthy enough for him and a crew to travel to Poland.

“We have someone who is Jewish, someone who is Roman Catholic, coming together and having that shared experience at a time when, in our country and locally too, we see a rise in anti-Semitic incidents, we see a rise in violence that is fueled by anti-Semitism, we see worldwide an increase in the type of rhetoric and language that unfortunately leads people to place other groups of people into categories … for all these reasons it felt like we must tell this story and share it,” he said.

“I also felt the responsibility for those who will never make that journey, for those who have never visited the Holocaust museum here or elsewhere,” he added.

Fritzshall was a teenager when she was sent to Auschwitz-Birkenau, she said, and part of the reason it happened was that her neighbors in the former Czechoslovakia had taken in anti-Semitic rhetoric and were spreading it even to the children in their homes.

“We had nowhere to turn,” she said.

Fritzshall had returned to Auschwitz several times, first with an aunt 30 years ago and then leading groups as a Holocaust educator, but the fear always comes back when she sets foot in the camp.

She was contemplating one last trip over the summer, as she was approaching her 90th birthday, but she wasn’t sure about it. That was when Cardinal Cupich agreed to accompany her.

“When he offered to go back with me, I grabbed the opportunity,” Fritzshall said. “I felt I was going with a friend. I was going back because I feel in years to come, the camps are not going to remain the way they are today. Even now, the camps are being torn apart. My fear has been and is today that in times to come, the young people are not going to see and get the story of Auschwitz and other camps.”

She fears that as survivors pass away, the story will fade.

Cardinal Cupich had visited Auschwitz before, but this trip was different, he said.

“I kept quiet for the most part because I wanted Fritzie to talk,” the cardinal said. “I wanted to see this terrible place through her voice, through eyes. That’s what really made it real.”

She was the one who told him details, such as how the latrines at the death camp became holy ground because it was the only place where prisoners had the privacy to pray.

She credits her survival, in part, to unexpectedly encountering her Aunt Nella the first day she arrived in the camp. Her grandfather, mother and brothers were all killed.

Asked how her faith helped her survive, Fritzshall said it wasn’t faith so much as hope. Every night, she said, her aunt would embrace her and tell her, “Tomorrow will be better.”

Toward the end of the war, she said, she was the youngest of 600 women taken from the camp to serve as slave labor in a munitions factory. Those women helped her survive so that she could tell their story.

“I have lived all of these years with the promise I made to 599 women that I would be their messenger,” said Fritzshall. “It was always, ‘Who will believe us? Who will believe that humanity can do such horrible, horrible things to other human beings? Somebody must live. Somebody must tell the story.

“So those women gave me extra rest. They took care of me,” she said. “They gave me the crumbs of their bread so that I could survive. If anyone had a chance, it was me because I was the youngest. If I survived, I was going to tell their story.”

Martin is a staff writer at Chicago Catholic, the news outlet of the Archdiocese of Chicago.