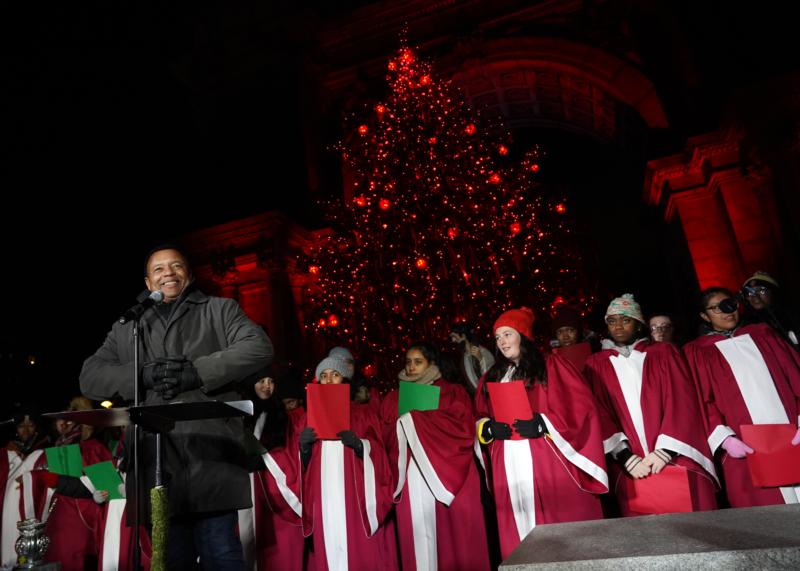 Kelly Wright smiles as he serves as master of ceremonies during the Diocese of Brooklyn’s annual Christmas tree-lighting ceremony Dec. 5, 2019, at Grand Army Plaza in Brooklyn, N.Y. The tree is decorated with 17,000 red lights and 2,500 red bows to draw attention to the ongoing persecution and martyrdom of Christians around the world. The ceremony was sponsored by the Diocese of Brooklyn, DeSales Media Group and Aid to the Church in Need. (CNS photo/Gregory A. Shemitz)

BROOKLYN, N.Y. (CNS) — This year the Diocese of Brooklyn’s Christmas tree was bedecked with 17,000 red lights and 2,500 red bows to draw attention to the ongoing persecution and martyrdom of Christians around the world.

The diocese, along with the DeSales Media Group, its diocesan communications arm, and Aid to the Church in Need, sponsored an evening tree-lighting ceremony Dec. 5. The 32-foot balsam fir sits in front of the Soldiers and Sailors Memorial Arch on Grand Army Plaza.

The tree will remain lit throughout the Christmas season. In front, at the base of a tree is a Nativity scene.

According to Open Doors USA, in the top 50 World Watch List countries alone, 245 million Christians experience “high levels of persecution for their choice to follow Christ.” That means one in nine Christians are suffering for their beliefs, the organization said.

Father Charles P. Keeney, director of the Propagation of the Faith for the Brooklyn Diocese, said Catholics should never take the freedom to practice their faith for granted.

“The birth of Jesus took place in Bethlehem, in the Middle East, where there has been centuries of fighting over religion, and many Christians in particular have lost their lives,” Father Keeney said at the ceremony.

“Here in Brooklyn, we’re a city of immigrants from all over the world, and … we’re able to put up Christmas trees, to celebrate in both secular and religious spaces, whereas a lot of Catholic brothers and sisters around the world cannot safely just go to Mass. So anything we can do to (raise awareness) a little bit more is a good thing,” he said.

Brooklyn Bishop Nicholas DiMarzio highlighted the importance of having a public Nativity scene in a prominent place such as the Grand Army Plaza. He cited an apostolic letter Pope Francis signed Dec. 1, the first Sunday of Advent, during an afternoon visit to Greccio, Italy, where St. Francis of Assisi set up the first creche in 1223.

“The life-size (Nativity) is a reminder of how Jesus was born, that he took on the poverty of human flesh; he who was God became man for us, and we are all brothers and sisters related to one another in Christ,” Bishop DiMarzio said.

Titled “Admirabile Signum” (“Enchanting Image”), the pope’s letter is on the meaning and importance of setting up Christmas cribs. A Nativity scene is a simple reminder of something astonishing, said Pope Francis: God became human to reveal the greatness of his love “by smiling and opening his arms to all.”

Contributing to this story was Allyson Escobar, a reporter at The Tablet, newspaper of the Diocese of Brooklyn.