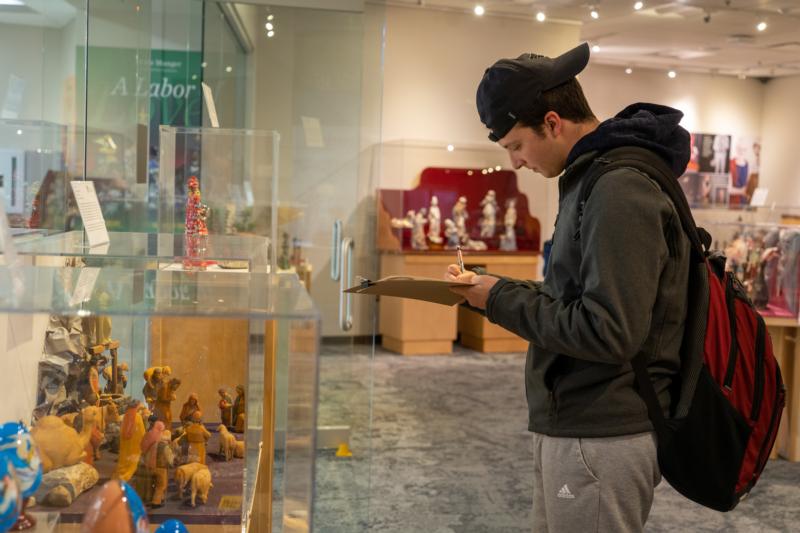 TJ Mann, a sophomore at the University of Dayton in Ohio, studies a Nativity scene displayed at the Marian Library Dec. 2, 2019. The university houses what curators believe is the largest Nativity collection in North America with about 3,600 sets. Around 100 selected creches go on display each December. (CNS photo/Katie Rutter)

DAYTON, Ohio (CNS) — Each culture, if not every home, has its own unique rendition of the Nativity. The Christ child may lay on a manger made from materials as diverse as wax, blown glass, yarn, papier-mache and terra cotta. Mary might don the dress of a first-century peasant or Renaissance royalty.

The ubiquitous manger scene makes the perfect illustration of enculturation, that is, adapting the principles of faith to a specific cultural setting. The Incarnation, the moment God becomes human, allows the nations to envision Christ as one of their own.

“Enculturation is a step further from the Incarnation,” said Marianist Father Johann Roten, a scholar at the University of Dayton and expert on cultural interpretations of the Nativity.

“The Incarnation is the son of God becoming human and enculturation will then be, he becomes not only human, but he becomes Afghani or he is Persian or he is German or French,” Father Roten told Catholic News Service.

The University of Dayton, which is a Catholic and Marianist institution, has amassed what curators believe is the largest collection of Nativity sets in North America. The archives contain about 3,600 creches from around 100 different countries.

“They’re really important examples of popular devotion,” said Sarah Cahalan, director of the Marian Library at the university, which houses the Nativity sets.

“We have pretty comprehensive coverage for Europe and North America,” she said, “so we’re really excited these days to get donations of materials from the African continent, from Asia. We have a great deal of materials from Latin America.”

Each December the university publicly displays around 100 curated sets.

On Dec. 2, the opening day of the Nativity display, a creche from France filled three tables in an attempt to portray an entire Provencal village. Along with the Holy Family, there were depictions of fishermen, peasants carrying wood, the parish priest and the town mayor, all of whom were in provincial dress. The scene intended to emphasize that everyone, wealthy and poor alike, must come to the manger. 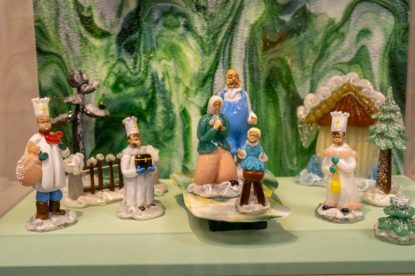 A hand-blown glass Nativity scene from Hungary is displayed at the University of Dayton in Ohio Dec. 2, 2019. The university has collected about 3,600 Nativity sets from 100 different countries to study and document the enculturation of the Gospel. (CNS photo/Katie Rutter)

A Nativity from New Mexico following the Pueblo tradition was made of clay painted with traditional colors and geometric shapes. Each face was fashioned to have a prominent nose and a wide open mouth.

“The idea behind it is what is most important in life is indeed life, and so therefore the breath of life, or the open mouth, and the nose that highlights that,” Father Roten said in an interview for Catholic News Service.

Another set from Australia contained both a koala and a kangaroo. Some figures were depicted as European and others as indigenous people; showing peace between two groups often at odds.

A Swiss creche painted in subdued tones carried a subliminal message characteristic of the German tradition. Two of the wooden shepherds were intentionally identical.

“You have to go to the manger in order really to know who you are, your identity as a human person because there is a danger to always consider one’s self as interchangeable with another person,” said Father Roten.

“In other words, the two identical figures actually are a way of saying we have a tendency of seeing ourselves in whoever we meet. So the alter ego idea is highlighted there, typical of the German tradition, very ambitious and very psychological,” he said.

The depiction of the Nativity spans across not only cultures, but also centuries. St. Francis of Assisi is credited with erecting the first live Nativity scene in 1223 in Greccio, Italy, recreating the moment using animals, people and perhaps even an infant stand-in for Christ.

The Basilica of St. Mary Major in Rome contains fragments of a Nativity scene by the 13th-century sculptor Arnolfo di Cambio. Around the 18th century, small Nativity sets began to be displayed in homes, allowing for even more devout customization of the scene.

“Our own beliefs and religion actually hinges upon our own tradition, the life of the family, what we heard from our father, mother, the kind of objects they left us,” explained Father Roten.

“We need to be very visual, very concrete, in order to represent our beliefs. … The Bible is very important, but it’s abstract. We need something a little bit more that speaks, that actually talks to the heart,” he said.

Father Roten suggested that, no matter what cultural traditions were followed, the Nativity be used as a tool to bring the family together in the “feast of love” known as Christmas.

The display of the University of Dayton’s curated selection of Nativity sets is free and open to the public. The collection will be on display at the Marian Library through Jan. 12.

Editor’s Note: More information about the University of Dayton’s Marian Library and its Nativity collection at can be found here. 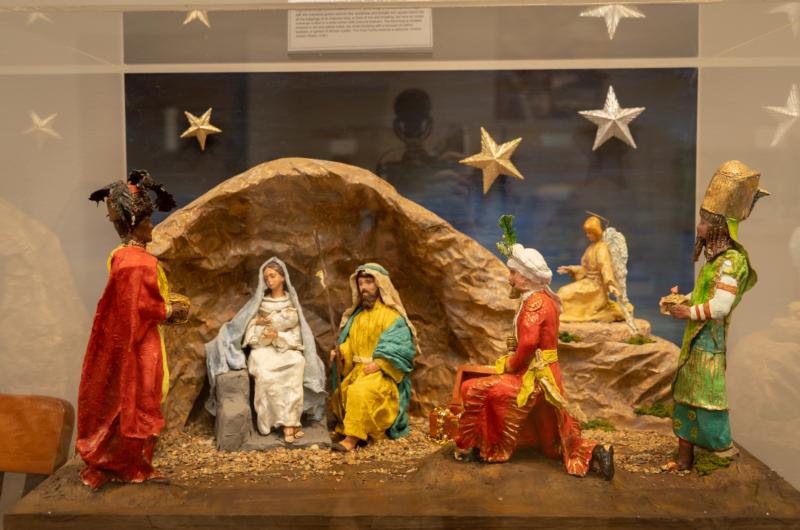 An Italian Nativity scene displayed at University of Dayton in Ohio Dec. 2, 2019, shows the arrival of the Magi. The university has collected about 3,600 Nativity sets to study the enculturation of the Gospel by observing cultural traditions and symbols. The attire of the Magi distinguishes them as royalty from Africa, India and Assyria. (CNS photo/Katie Rutter)

PREVIOUS: ‘God has all of me:’ Crisis led woman to life as virgin