‘God has all of me:’ Crisis led woman to life as virgin 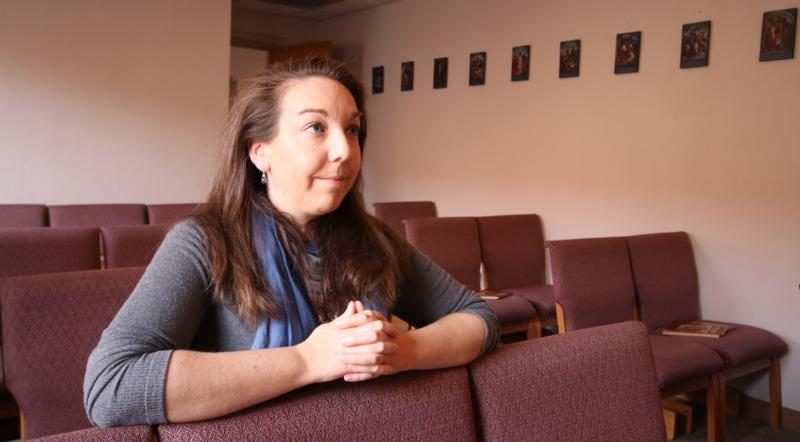 Miriam Marston, 38, prays Nov. 14, 2019, in the chapel at the pastoral center in Portland, Ore., where she helps coordinate lay ministry formation programs. This spring Marston will participate in one of the oldest rites of the church. She will be consecrated to God, "mystically espoused to Christ and dedicated to the service of the church," according to the Code of Canon Law. (CNS photo/Katie Scott, Catholic Sentinel)

PORTLAND, Ore. (CNS) — Next May, Miriam Marston will wear a white dress, receive a ring and stand in front of the altar at St. Mary Cathedral of the Immaculate Conception in Portland.

There will be no tux-clad groom by her side.

In one of the oldest rites of the church, Marston, 38, will be consecrated to God — “mystically espoused to Christ and dedicated to the service of the church,” according to the Code of Canon Law. She’ll join approximately 250 women in the United States and 5,000 worldwide who are known as “consecrated virgins living in the world.”

This was not the path she long envisioned. Although she was raised Catholic, she wasn’t particularly engaged with her faith and said: “For a long stretch, I was probably fairly agnostic.”

In her sophomore year at the College of William and Mary in Williamsburg, Virginia, two successive tragedies shook the faith she had: a cousin’s suicide and the 9/11 attacks that left her questioning everything she thought she knew about life.

“It got me wondering, genuinely for the first time, if there was a God and if this was a good God,” she told the Catholic Sentinel, newspaper of the Archdiocese of Portland, adding that she was “trying to make sense out of suffering.”

During this spiritual crisis, her mother gave her a copy of “Mere Christianity,” C.S. Lewis’ logical defense of God’s existence and while she was reading it, she felt an “infused knowledge that God was real and that he loved me.”

“I’d fallen into love with this God,” she said, adding that she cried, happy tears, for two weeks.

She didn’t go right back to church though. For several months, she studied Buddhism and Hinduism. In the end, she felt nothing answered the question of suffering better than Christianity.

“I needed a religion with a cross,” she said. “I can’t go anywhere in my aches and sufferings and in those questions that Jesus hasn’t already gone.”

After graduating, Marston was unsure where God was calling her. She discerned for a time with the Daughters of St. Paul and lived in England for several years.

“I couldn’t shake the feeling that the Lord was calling me to be his own in this more exclusive way,” she said.

While living in Boston, she met a woman preparing to be a consecrated virgin. It was something she’d never heard of and it caught her attention.

Although the vocation sounded “like home” to her, she didn’t pursue it immediately.

Consecrated virgins living in the world existed in the early church, but the vocation essentially disappeared in the 11th century as monastic communities of women religious formed. A restored rite was issued following the Second Vatican Council. To become a “bride of Christ,” a woman must have never married and must demonstrate a life of chastity and devotion to the church.

Marston said the word “virginity” can make some people uncomfortable because it calls to mind human sexuality. But consecrated virginity is “the idea of giving that gift of virginity back to God,” she said, that “God has all of me, body and soul.”

Several years after learning of the vocation, Marston was out to dinner with a friend who said she was considering becoming a consecrated virgin. When the friend got up to use the restroom, Marston looked down at her own phone.

The woman who’d introduced her to consecrated virginity years prior had just written on her Facebook page that she was praying for those discerning God’s will. “Don’t be afraid to say, ‘Yes,'” she wrote.

At home that night, Marston emailed the delegate for religious life in the Archdiocese of Boston and asked to meet. She began formation soon after.

In 2014, to be near her sister and her family, Marston took her formation journey to the West Coast. She now also serves as coordinator for the Portland Archdiocese’s Institute for Catholic Life and Leadership, which oversees lay ministry formation programs.

As part of the formation process, she’s had regular meetings with another local woman in formation and two of the four consecrated virgins in the Archdiocese of Portland. On May 24, Portland Archbishop Alexander K. Sample will consecrate the two women to God.

Marston is often asked about her unique vocation, including why she didn’t choose to be a religious sister.

Her short answer is that God didn’t call her to that. “But part of it was that I had this desire to live in the world and be a witness in the heart of everyday life,” she said, adding with a smile that she calls it “being a secret agent for Jesus.”

Unlike religious, consecrated virgins do not live in community, wear distinguishing garb or take a title like “sister.” They support themselves financially and pursue careers, many in the secular world. Marston knows one consecrated virgin who is an emergency room nurse.

The vocation points toward the reality that Christ is the ultimate fulfillment, she said.

Marston said there is a lot of unhappiness in modern culture and she wants to be part of that remedy, to say there is another alternative.

“We have a path set out before us,” she said. “And it’s one that leads to the very heart of God.”