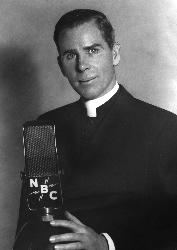 WASHINGTON (CNS) — Thanks to television and radio, Archbishop Fulton J. Sheen touched countless Americans using the most advanced technology available to him.

Some years ago, The Catholic University of America in Washington, using the most advanced technology it had available, digitized its archives on Archbishop Sheen, as well as maintaining them on the university campus.

Virtually everything the university archives knows it possesses on the host of “The Catholic Hour” and other programs is online, save for the “positio,” or official position paper. The copyrighted, two-volume set on the life and holiness of Archbishop Sheen, which includes his writings, was prepared for review at the Vatican’s Congregation for Saints’ Causes.

“They (the positio) are not shared widely while the cause is still proceeding,” said Shane MacDonald, a special collections archivist with Catholic University’s archives office, who added he believes there is no larger online archive of the late archbishop. The university’s archive can be accessed here.

His sainthood cause was officially opened in 2003. In July, Bishop Daniel R. Jenky of Peoria, Illinois, announced Pope Francis had approved a miracle attributed to the intercession of Archbishop Sheen, which led the way to the announcement he would be beatified Dec. 21. But the Vatican announced in early December that the beatification was being postponed.

In an interview with Catholic News Service, MacDonald said other archives of Archbishop Sheen-related material exist.

In Peoria, Illinois, the prelate’s home diocese, the Fulton Sheen Foundation maintains a larger archive than Catholic University, but it is not online. The Diocese of Rochester, New York — which then-Bishop Sheen headed from October 1966 until his retirement in October 1969, when he received the title of archbishop — has much material on him, MacDonald added, but said much of it is poorly organized.

The Archdiocese of New York also has archival material, as he had been an auxiliary bishop there, from 1951 to 1966, according to MacDonald. The Library of Congress in Washington, he noted, has archives on Archbishop Sheen as well, including episodes of “The Catholic Hour,” which aired 1930 to 1950 on NBC radio, and “Life Is Worth Living,” but as copyrighted material, those can be seen or heard onsite only and cannot be borrowed.

Compared to material on other church figures, Catholic University’s holdings on Archbishop Sheen are fairly small, MacDonald acknowledged. Their contents fill several boxes; a bit more archival material on the prelate, he said, is in the U.S. Conference of Catholic Bishops’ archives housed at CUA.

“We don’t have any ‘trophies’ — chalices,” MacDonald said, adding they may be in the possession of relatives. Moreover, “there are gaps in the collection,” he noted, and this material may also be in the hands of family members.

Catholic University acquired its holdings largely from Archbishop Sheen himself. He had taught at the university from 1927 to 1950, and donated much of his lecture and class notes as both a professor and as a student at the Catholic University of Leuven in Belgium.

There also are books made from some of the archbishop’s on-air homilies. One of MacDonald’s favorites is simply titled “You.”

MacDonald said Archbishop Sheen’s archives were digitized based on the demand to view certain items. “There was a list of 10” archives where the request volume was significant, he added. “Bishop Sheen was, I think, the fourth” set to be digitized in the mid-2010s.

The work took a couple of months, he noted. There’s a ballpark estimate, MacDonald added, of $1 per page to scan and upload archival material, given the cost of labor — students can be helpful in this regard — digitization protocols and the acquisition of server capacity to keep them available in cyberspace.

The physical archives are maintained in acid-free folders and kept in temperature- and humidity-controlled rooms when not being viewed by researchers or other interested persons, MacDonald said.

Archbishop Sheen, he added, is “an important figure in 20th-century American Catholicism.”

NEXT: Daleiden, colleague charged with nine counts of criminal eavesdropping