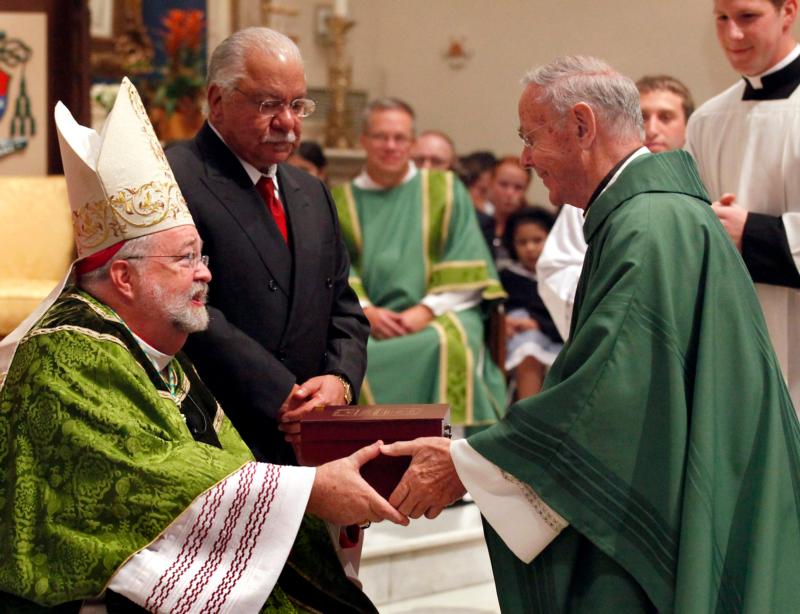 Bishop Daniel R. Jenky of Peoria, Ill., hands a copy of the “positio” on Archbishop Fulton J. Sheen’s life to Father James O’Brien, representing the late Cardinal Francis E. George and the Archdiocese of Chicago, during a Mass at the Cathedral of St. Mary of the Immaculate Conception in Peoria Sept. 9, 2012. (CNS photo/Karen Callaway, Catholic New World)

PEORIA, Ill. (CNS) — Supporters of the canonization cause for Archbishop Fulton J. Sheen have been invited to take part in a novena starting Dec. 12 to “petition God unceasingly to remove all obstacles” for the beatification of the media pioneer, author and evangelist.

“We are confident in the power of prayer,” Peoria Bishop Daniel R. Jenky said in a video message released Dec. 9, the 40th anniversary of Archbishop Sheen’s death. The video and prayers for the nine-day devotion are found here.

“I know how deeply saddened we all are about the postponement of the beatification of Fulton Sheen,” said Bishop Jenky, speaking in front of Archbishop Sheen’s tomb at St. Mary’s Cathedral in Peoria. “But in these turbulent times when our faith is being tested — which even Fulton Sheen prophesied about — we need to remain faithful to prayer like Archbishop Sheen.”

A novena had been planned, starting on the Dec. 12 feast of Our Lady of Guadalupe, to prepare for and lead to Archbishop Sheen’s scheduled beatification in Peoria Dec. 21. The beatification date was postponed, however, by the Vatican, the diocese said Dec. 3.

Two days later, the Diocese of Rochester, New York — which then-Bishop Sheen headed from October 1966 until his retirement in October 1969, when he received the title of archbishop — acknowledged it had raised concerns over the prelate’s role in priests’ assignments and took those concerns to the Congregation for Saints’ Causes. As a result, Vatican officials said they wanted to give a further review of related records before the beatification goes forward.

The Diocese of Peoria, which has promoted the canonization cause, has emphasized that “there has never been, nor is there now, any allegation against (Archbishop) Sheen involving the abuse of a minor.”

And in a lengthy column posted on the Sheen beatification website Dec. 7, Msgr. James Kruse — a former vicar general of the Diocese of Peoria who has worked extensively on the cause — presented a timeline of events and questioned what he claims is an “established pattern” by the Diocese of Rochester in trying to block the cause.

“But do not lose heart,” he continued. “Follow Sheen’s example: Even when facing adversity, keep the faith!”

A focus on prayer was the hallmark of observances of the 40th anniversary of Archbishop Sheen’s death at age 84 Dec. 9.

A grassroots effort launched in the days prior to the anniversary aimed to have a million Masses said all over the world on that day to pray that that the beatification would go forward. The novena announced by Bishop Jenky continues a united prayer effort until Dec. 21.

“Please join me beginning on Dec. 12, the feast day of Our Lady of Guadalupe,” invited Bishop Jenky on the video, “so under her immaculate mantle we can begin a special nine-day novena asking God to please raise up Fulton Sheen and pour out His blessings on his cause for beatification and canonization.”

Subsequent videos of Bishop Jenky leading the novena prayers will be posted at celebratesheen.com, which also has a link to download the text of the novena, including the prayer for canonization to be recited daily. Each day’s text begins with a quote from Archbishop Sheen, followed by a related prayer on topics such as devotion to Mary, the need for confession, and humility.

“How God will judge my life I know not,” begins the Archbishop Sheen quote for Day 1 of the novena, “but I trust he will see me with mercy and compassion. … When the record of any human life is set down, there are three pairs of eyes who see it in a different light: As I see it, as others see it, and as God sees it.”

The videos of the novena also will be shared via social media and Catholic media.

NEXT: CUA an onsite, online repository for Archbishop Sheen’s archives