Every Catholic has duty to evangelize, archbishop tells Phoenix crowd 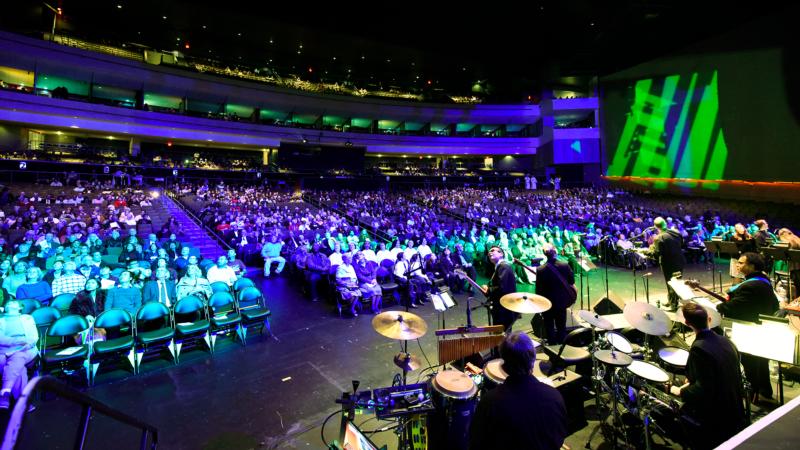 Thousands of laypeople, religious and clergy from throughout Arizona and other states fill Comerica Theatre in downtown Phoenix Dec. 2 for a Mass marking the 50th anniversary of the Phoenix Diocese. (CNS photo/Jesus Valencia, The Catholic Sun)

PHOENIX (CNS) — Thousands of faithful, religious and clergy from throughout Arizona and beyond streamed into Comerica Theatre in downtown Phoenix Dec. 2 to mark the 50th anniversary of the establishment of the Diocese of Phoenix.

At the front of the theater, a massive banner depicting the Holy Family hung over the candle-adorned altar.

The Diocese of Phoenix commissioned Ruth Stricklin, a local artist, to paint the image in honor of the 50th anniversary. The Holy Spirit in the form of a dove hovers over the Holy Family figures and a portrayal of God the Father looks down from the heavens.

Vince and Ann Sheridan of St. Daniel the Prophet Parish in Scottsdale, Arizona, were unique among the more than 5,000 attendees at the anniversary event: The couple has vivid memories of the birth of the diocese in 1969 and the installation of its first shepherd, Bishop Edward A. McCarthy.

“I can’t believe how packed this is,” Vince told The Catholic Sun, Phoenix’s diocesan newspaper. “When I hear people talk about what parish they’re from — that parish didn’t exist 50 years ago. Some of them didn’t exist 15 years ago. We’re still growing.”

As busloads and caravans of people filed into the theater and took their seats, well-known local Catholic musicians, including Paul Hillebrand, Tom Booth, Jaime Cortez and Chris Muglia led the crowd in song.

Just in front of the stage where the musicians stood, the Missionaries of Charity in their distinctive white and blue saris sat and listened.

Booth regaled the crowd with the request he received in 1989 to compose a song for the visit of the Missionaries of Charity foundress, St. Teresa of Kolkata. He put to music the words of Blessed Charles de Foucald’s well-known “Prayer of Abandonment” in his song of the same name. The diminutive nun told Booth he left out a line — the most important one that expresses the faithful’s love for God.

“St. Mother Teresa of Calcutta, your foundress, your mother, is praying for us even now, especially as we sing this song together,” Booth said as he introduced the hymn.

A video featuring photos and footage from throughout the 50 years of the diocese moved the crowd to applause at some points, particularly the scenes featuring the 1987 papal visit, Bishop Thomas J. Olmsted and Auxiliary Bishop Eduardo A. Nevares of Phoenix and the many religious sisters who have made the diocese their home.

Two representatives were chosen from each of the diocese’s 94 parishes to participate in a procession at the opening of the Mass. Bearing flowers they laid behind the altar and under the image of the Holy Family, they greeted Bishop Olmsted and took their seats.

Dozens of priests and deacons then filed onto the stage, followed by Bishop Olmsted; Bishop Nevares and visiting bishops and other dignitaries.

Among the prelates were Archbishop Jose H. Gomez of Los Angeles, the guest homilist, who is the new president of the U.S. Conference of Catholic Bishops; Bishop James S. Wall of Gallup, New Mexico, who as a priest was ordained for the Phoenix Diocese; Bishop John S. Pazak and retired Bishop Gerald N. Dino of the Holy Protection of Mary Byzantine Catholic Eparchy of Phoenix; and Father Glennon Jones, vicar general of the Archdiocese of Santa Fe, New Mexico, who was representing Archbishop John C. Wester, the region’s metropolitan archbishop.

“For everyone gathered here tonight, welcome in the name of the Lord Jesus,” proclaimed Bishop Olmsted at the beginning of the liturgy.

Archbishop Gomez emphasized the urgent need for evangelization and focused on the rich history of the Catholic Church in the Southwest in his bilingual homily.

“Our dioceses are connected by the Holy Spirit and by history,” Archbishop Gomez said, pointing to the missionary efforts of Jesuit Father Eusebio Kino, a “servant of God” and candidate for sainthood, and the martyred Franciscan Fray Francisco Garces. Both men were immigrants to the present-day U.S. from Spain by way of Mexico and were deeply devoted to Our Lady of Guadalupe.

Invoking the prayers of the Virgin of Guadalupe, Archbishop Gomez urged the crowd to heed the words of the Gospel proclaimed at the anniversary Mass — to go and make disciples of all nations.

“The church exists to evangelize. There is no other reason, no other purpose for the church,” Archbishop Gomez said, adding that such work is not reserved to clergy and religious.

He also hearkened back to the words spoken by St. John Paul II when he visited Phoenix: “He said to you: ‘The work of evangelization is not over. On earth it will never be over. … The duty of carrying forward this work rests on the whole church and on every member of the church.'”

The prayers of the faithful at the Mass reflected the wide ethnic diversity in the diocese. Petitions were offered in English, Spanish, Indonesian, Korean, Italian and Polish.

Father Dan Connealy, parochial administrator of St. Joan of Arc Parish, grew up in the Diocese of Phoenix and was one of the dozens of priests who concelebrated the anniversary Mass.

“We’re one of the younger dioceses in the country — probably in the world — but it’s a great gift to be here this evening and to celebrate,” he said.

The next 50 years in the diocese are an opportunity to “continue to proclaim the Gospel of Jesus Christ. Jesus Christ is always good and he always invites us to share his love,” Father Connealy added.

NEXT: Bishops take new actions to hold themselves accountable for abuse in 2019