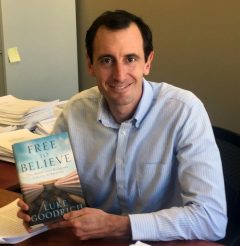 SALT LAKE CITY (CNS) — As an attorney with Becket, a religious liberty law firm, Luke Goodrich is proud to be able to make a difference while earning a livelihood. He sees his work as a calling from God.

It entails representing religious groups or individuals who fall afoul of the federal government simply by trying to follow the dictates of their conscience.

Perhaps the most well-known of his clients are the Little Sisters of the Poor, who operate a number of homes for the elderly poor across the nation. The sisters continue to fight the Obama-era contraceptive mandate in the courts.

“I’m very grateful and very thankful that my life’s work lines up with what I see as a fundamental issue of justice in Scripture,” he said. “It’s a great joy because I do think religious freedom is a basic human right and a basic issue of biblical justice.”

Goodrich is a member of Misseo Dei Community, a nondenominational Protestant church in Salt Lake City. Originally from Florida, Goodrich has for the past seven years lived in Utah with his wife, Sarah, who grew up in Utah, and their seven children.

Prior to that, he attended the University of Chicago law school and afterward clerked for Judge Michael McConnell, one of the nation’s leading scholars on religious freedom cases. He then worked for the U.S. State Department in the human trafficking division, followed by time at a private law firm in Washington.

When a position opened up at Becket in 2008, “I jumped at the opportunity,” Goodrich told the Intermountain Catholic, newspaper of the Diocese of Salt Lake City.

Becket was founded in 1994, by Kevin “Seamus” Hasson, a Catholic. It is “the nation’s only law firm dedicated exclusively to protecting religious liberty and to doing so for people of all faiths,” said Goodrich, vice president and senior counsel. Becket’s main headquarters are in Washington.

With regard to the legal battle being waged by the Little Sisters of the Poor, Goodrich called their case critically important for the defense of religious liberty.

“If the government can reach inside us and force us to violate our conscience, there’s very little that the government can’t do,” he said. “Every human being is born with a religious impulse, a desire for transcendent truth and by its very nature we can’t act on that impulse under coercion.

“If the government coerces us in matters of transcendent truth, it’s going against our fundamental nature as human beings and therefore violating our human rights,” he added.

President Barack Obama signed the Affordable Care Act into law in 2010. The Department of Health and Human Services in 2013 added FDA-approved contraceptives to a list of preventive services, mandating all employer health care plans cover all forms of these methods. It included a very narrowly drawn exemption for churches.

This exemption did not cover religious employers such as the Little Sisters, Catholic dioceses and many other faith-based organizations, all of whom opposed the mandate on moral grounds, because some of the approved contraceptives are considered abortion-inducing.

More than 100 lawsuits have been filed over the Obama-era regulation by religious organizations.

“It’s one of the only times in our nation’s history where the federal government has attempted, on such a large scale, to force so many religious organizations to violate their conscience, particularly around the issue of abortion,” Goodrich said.

When the Little Sisters sued, claiming a religious exemption, their case made it to the 10th U.S. Circuit Court of Appeals, which rejected their argument. Becket intervened in the case on their behalf.

In 2016, the Supreme Court granted the Little Sisters of the Poor a religious exemption from the mandate.

Then, one year later, they were given further protection by an executive order issued by President Donald Trump requiring HHS to write a comprehensive exemption from the contraceptive mandate for the Little Sisters and other religious ministries.

HHS provided this exemption in 2018, but several states challenged it, including California, Pennsylvania and New Jersey, saying HHS didn’t have the power to give this exemption.

In May, HHS introduced the “conscience rule” that protects individuals and health care entities from discrimination on the basis of their exercise of conscience in HHS-funded programs. Several state attorneys general subsequently filed suit against HHS and the administration, arguing that the new rule is unlawful.

The attorneys general cases “exploit essentially a loophole because the Supreme Court’s decision did not issue a definitive ruling that the Obama-era regulation was unlawful,” Goodrich said. “Instead, it urged the parties to figure out a solution that would respect the religious freedom of the sisters and also accomplish the government’s goal of distributing contraception.”

So far, the 3rd and 9th circuit courts, based in Philadelphia and San Francisco, respectively, have found against the Little Sisters and other religious organizations. Becket has appealed to the Supreme Court to rehear the Little Sisters case and give a definitive ruling.

The Supreme Court is expected to decide by June 2020 whether it will hear the case, which Goodrich said is likely.

He believes that ultimately the Little Sisters will prevail. Still, there are a number of significant religious freedom challenges on the horizon in the United States that Christians are ill-prepared to deal with, he said.

“Long-standing Christian beliefs about life, marriage and absolute truth, which used to be uncontroversial, are now viewed in many quarters as a threat to the prevailing culture,” he said.

Goodrich has published his first book, “Free to Believe,” examining the principle of religious freedom, threats to it and how to protect it. He offers three arguments why everyone should care about religious freedom: It benefits society, is the foundation of all of our other rights and is a fundamental human right.

Petersen is a reporter for the Intermountain Catholic, newspaper of the Diocese of Salt Lake City.

NEXT: Every Catholic has duty to evangelize, archbishop tells Phoenix crowd