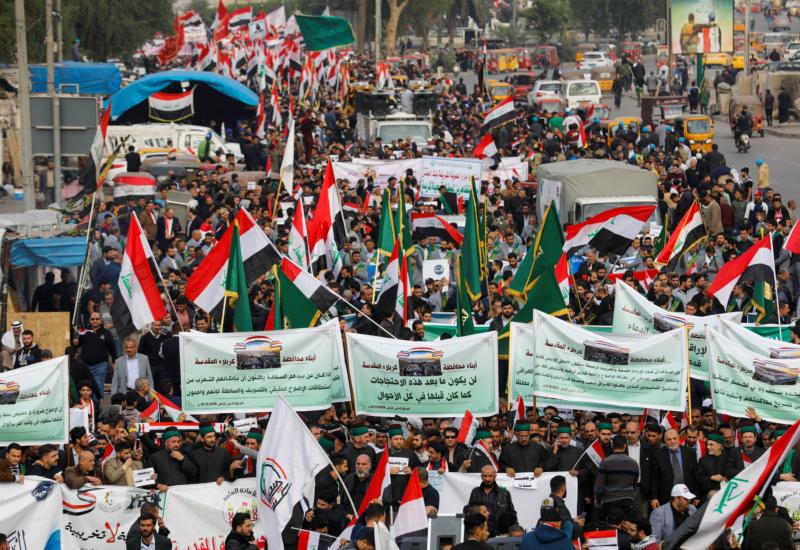 WASHINGTON (CNS) — From Chile to Haiti to Hong Kong, protests appear to be sweeping the globe. Although sparked by different events, they also reflect a common frustration with economic inequality and corrupt governments, experts say.

“We seem to be in the midst of people-power movements around the world,” said Maria Stephan, director of the nonviolent action program at the U.S. Institute of Peace.

“People are protesting for a variety of causes,” but some of the underlying reasons for discontent are similar, she told Catholic News Service.

One is the growing gap between the wealthiest and poorest people.

“We’re in an era of peak global inequality,” in which people feel “distrustful of systems that seem to be leaving them behind,” Stephan said.

Another trend she calls “troubling” is a return to authoritarian governments in various countries.

“There is a link between the backsliding of democracy and the inclination of people to take to the street and not trust as much in traditional processes and institutions,” she said.

Those street demonstrations are largely organized through social media, giving them a spontaneous feel, although they often build on years of organization and previous protest.

Nevertheless, there is “a difference between quick mobilization and sustained organization,” she said. “It will be interesting to see whether these spontaneous protests are able to establish legs and maintain longevity and bring about reforms.”

Protests erupted in June, after the former British colony’s government proposed a law that would have allowed extradition of criminal suspects to mainland China. Cardinal John Tong Hon, apostolic administrator of the Diocese of Hong Kong, was among those who called for the measure to be withdrawn.

The government dropped the proposal in September, but demonstrations continued. Demands have expanded to include universal suffrage, amnesty for arrested protesters and investigation of police brutality.

Widespread protests are new in Hong Kong, dating back only to about 2013, Maggie Shum, a research associate in the Keough School of Global Affairs at Notre Dame University, told CNS.

When Shum, a Hong Kong native, visited the city in June and July, as the protests were gaining steam, many of those participating seemed new to street demonstrations, she said.

People are frustrated because Hong Kong’s electoral system does not give them a real voice in political decisions, Shum said. The result has been political polarization and a loss of trust in government.

“Thinking long term, I am worried in a way about how this experience will change the next generation,” she said.

At the same time, the upheaval, which the media often paint as a David-and-Goliath struggle between the protesters and a monolithic Chinese government, may benefit groups that suffer repression in China, but that lack the international spotlight made possible by internet access.

It was “never the goal for Hong Kong to be a pioneer, but it’s powerful in a sense,” Shum said. “Hong Kong is more visible (and) people are trying to use this position to raise issues of other voiceless, marginalized groups,” such as human rights activists and China’s Uighur Muslims.

Unlike Hong Kong, where the major issues are political, protesters in Latin America are calling for both political and economic reforms. That may partly reflect worries that an economic downturn in the region could send families sliding back into poverty.

Protests that began in Nicaragua in April over the pension system have expanded to include demands for greater democracy and calls for President Daniel Ortega to resign. In long-running protests in Venezuela, opposition demonstrators are pressing for strongman President Nicolas Maduro to step down.

Violent protests that broke out in Bolivia over accusations of election fraud caused President Evo Morales, who had claimed victory in a controversial re-election bid, to flee to Mexico. Other officials in the line of succession resigned, sowing confusion that has underscored the country’s political polarization.

In Ecuador, the elimination of fuel subsidies as part of an economic adjustment deal with the International Monetary Fund sparked protests in October that forced the government to backpedal.

Ongoing protests in Chile were touched off in early October by a transit fare hike, but they expanded to include demands for more equitable health care and education, as well as increases in the minimum wage and education. The government of President Sebastian Pinera made some concessions and agreed to hold a referendum in April 2020 on whether to rewrite the constitution. In the streets, however, security forces cracked down sharply with tactics reminiscent of the dictatorship of General Augusto Pinochet.

New government policies in support of such measures are cause for concern, sociologist Cristian Montenegro of the Pontifical Catholic University of Chile in Santiago told CNS.

Colombians took to the streets in late November to protest plans to cut labor benefits and pensions, but the demonstrations also reflect discontent with President Ivan Duque and concerns over a resurgence in violence.

In the Caribbean island nation of Haiti, protests that have roiled urban areas since November are subsiding, but many parents still feel it is not safe to send their children to school, said Christopher Bessey, Haiti country director for Catholic Relief Services, the humanitarian aid and development arm of the U.S. Conference of Catholic Bishops.

Protests began in mid-2018, when the government eliminated fuel subsidies, sending gas prices soaring. That was followed by indignation over a corruption scandal involving reduced-price oil from Venezuela, in which the funds saved, which were to be invested in social services, disappeared. Demonstrators began calling for President Jovenel Moise to resign.

As protests escalated, demonstrators set up roadblocks, bringing transport to a standstill, Bessey told Catholic News Service. Workers could not get to their jobs, farmers were unable to send products to urban markets, and sick Haitians could not reach hospitals.

“The people who are really suffering in this are not the politicians, not the business community, it’s the people on the margins and the people who are dependent on a functioning economy for the few who do have work,” Bessey told Catholic News Service.

Although the situation has been calmer in recent days, protests could flare again in early 2020, when elections are scheduled.

Demonstrations sweeping the Middle East echo a wave of protests in 2011 that raised hopes for more responsive governments. Those expectations were never fully satisfied, however, and the protests against corrupt leaders and economic inequality have flared again. Protests have forced prime ministers out of office in Lebanon and Iraq.

Egypt saw a month of protests, beginning in mid-September, when a defense contractor living in exile accused President Abdel Fattah el-Sissi and people close to him of corruption. Security forces arrested nearly 3,000 people during the demonstrations, which also reflected frustration with an economic recovery that was not trickling down, experts say.

In Iraq, the largest protests since dictator Saddam Hussein was ousted in 2003 began in early October over corruption, poor public services and a lack of jobs. Security forces responded with tear gas and live ammunition, leaving more than 300 people dead and at least 8,000 injured, according to human rights groups.

As the demonstrations continued, the protesters began to demand an overhaul of the country’s political system. Observers say Iranian infiltration of the protests has complicated the situation, because Iran, a close ally of the Iraqi government, has an interest in quashing the protests.

Meanwhile, the Iranian government has cracked down on protesters demonstrating over rising fuel prices, which are related to tightening U.S. sanctions against the country.

Pope Francis has called for dialogue in Iraq and expressed sorrow for the deaths of protesters there. “I was saddened to learn that the protests in recent days have been dealt with harshly, leading to the death of dozens of victims,” he said during the Angelus prayer Dec. 1.

Women in Lebanon have also seized the moment to protest sexual violence, from harassment to assault. That is part of another protest trend that is spreading around the world, reflected in a massive street performance that begin in Chile with a chant called “the rapist in your path.”

Groups of women have gathered to repeat it in countries around Latin America and Europe. The street performance, the brainchild of a Chilean feminist collective, struck a chord in Latin America, where more than 3,500 women were murdered last year, many by a current or former husband or boyfriend.

Throughout Latin America, street protests reflect “a sense that structural changes are needed,” Montenegro told CNS. Although the process will be slow, he added, “a seed is being planted that will continue to grow.”