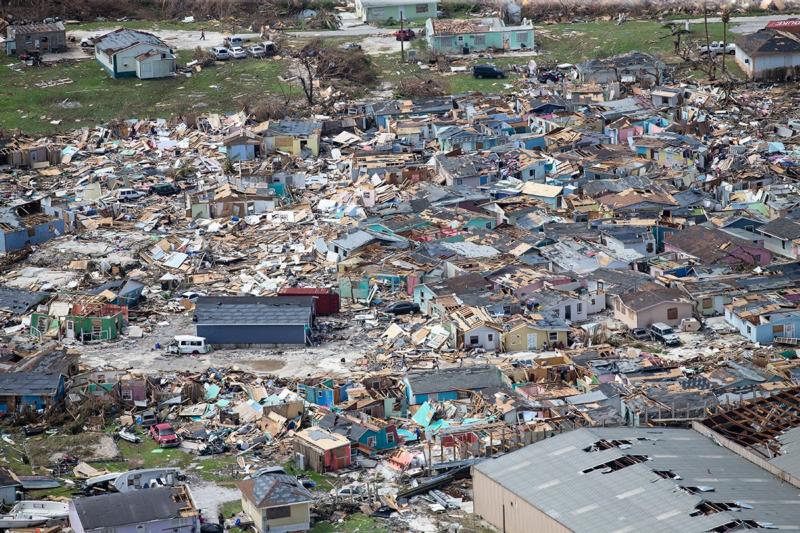 Destruction from Hurricane Dorian is seen at Marsh Harbour in Great Abaco Island, Bahamas, Sept. 4, 2019. In time for Christmas, a trailer loaded with supplies furnished through donations from Catholics and charitable foundations around the South Florida region, reached the Bahamas capital and port city of Nassau Dec. 7, according to Peter Routsis-Arroyo, director of Catholic Charities of the Archdiocese of Miami. (CNS photo/Al Diaz, Miami Herald via Reuters)

MIAMI (CNS) — What could be thought of as an early Christmas present from Florida to the hurricane-weary Bahamas set sail in early December in the form of a mobile trailer full of more emergency supplies for ongoing Hurricane Dorian relief.

The trailer — loaded with supplies furnished through donations from Catholics and charitable foundations around the South Florida region — reached the Bahamas capital and port city of Nassau Dec. 7, according to Peter Routsis-Arroyo, director of Catholic Charities of the Archdiocese of Miami.

A special Hurricane Dorian appeal throughout the Catholic community of South Florida has to date generated some $700,000 earmarked for Hurricane Dorian relief in the Bahamas and in conjunction with the Archdiocese of Nassau. The deadly hurricane struck the northern Bahamas in early September and left thousands homeless.

The latest shipment is part of an ongoing effort to ship Catholic Charities relief items to the ports of Nassau and Freeport, where they will be redirected to the hardest hit areas of Grand Bahama and Abaco Islands.

The supplies in the latest shipment are the same kind of supplies sent previously, “including air mattresses, cleaning supplies and so on, as I think we are wrapping up that initial phase,” Routsis-Arroyo said. He noted that he is in regular communication about logistics planning with Nassau Archbishop Patrick C. Pinder.

“There will also be some roofing materials that will go out as well and I think the change will be moving more in that direction after the New Year. I think they will be gearing up to do more involved in the revitalization of Abaco,” Routsis-Arroyo said, noting that one of the Catholic school properties on Abaco is currently serving as an outpost for international relief efforts.

“The Nassau Archdioceses has allowed a school building there to be a relief agency — and I can foresee that being an operation for the recovery,” Routsis-Arroyo told the Florida catholic, newspaper of the Archdiocese of Miami. He added that he expects to make another fact-finding visit to the region in early 2020.

The donations include a mobile trailer, and the benefit of that is this trailer can be hauled around the Bahamas as needed to support relief and reconstruction operations as they start and stop and move to new locations.

“We are talking about a major rebuild on two islands. Any continued help with donations (is appreciated),” Routsis-Arroyo said. “We are in this for the long term. We are in constant communication with Archbishop Pinder.”

Routsis-Arroyo added that the $700,000 in hurricane relief funds collected in South Florida represented a significant amount of generosity from the region and was due in part to several private foundations, including the Virginia-based Alleghany Foundation, a charitable arm of a Catholic health care group and a women’s religious community.

The Bahamas death toll following the Category 5 Dorian stands at approximately 65 people. Another 282 were left missing.

A November report from the Inter-American Development Bank noted that Dorian’s punishing 185 mph sustained winds and 25-feet storm surges caused an estimated $3.4 billion in damages. The amount, which puts the Bahamas on a difficult path to reconstruction, is equivalent to one-fourth of the country’s gross domestic product. That’s equivalent to the United States losing the combined economies of Florida, California and Texas, the report said.

The historic storm resulted in the indefinite closure of St. Francis de Sales School in Abaco, which suffered both high winds and devastating storm surge. Mary, Star of the Sea Catholic Academy in Grand Bahama has reopened, but many of the homes of students there were destroyed by the hurricane.