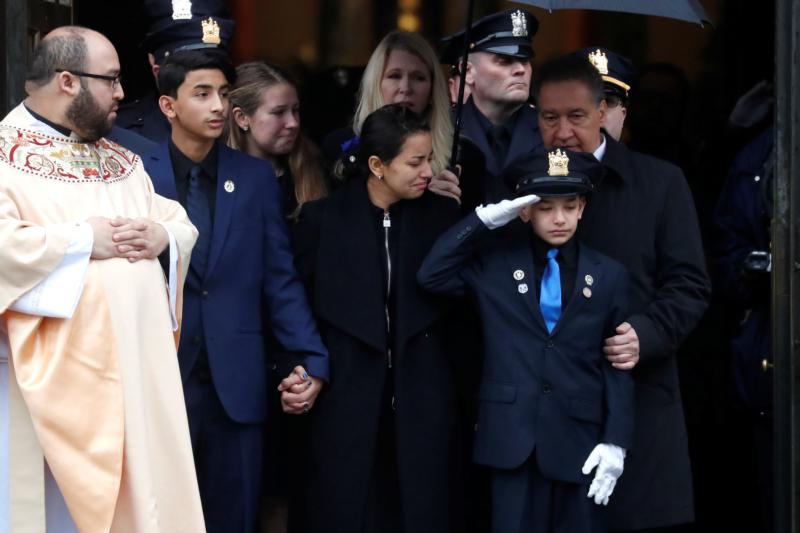 The family of Jersey City Police Detective Joseph Seals watches as his casket is carried from St. Aedan’s Church following his funeral Mass in Jersey City, N.J., Dec. 17, 2019. Seals, a 40-year-old married father of five was gunned down Dec. 10 in what officials are calling a domestic terrorism attack that also left three other civilians dead. (CNS photo/Shannon Stapleton, Reuters)

JERSEY CITY, N.J. (CNS) — Thousands of people attended the Dec. 17 funeral Mass for Detective Joseph Seals, the police officer fatally shot Dec. 10 at a cemetery in Jersey City just prior to the deadly attack at a kosher grocery store in the neighborhood.

Seals, a husband and father of five children who was a 15-year veteran of the Jersey City Police Department, was remembered as a hero, a committed police officer and a devoted family man during the Mass celebrated at St. Aedan’s Church in Jersey City by Newark Cardinal Joseph W. Tobin.

The cardinal told the congregation that faith can’t take away the pain, but it offers comfort in troubling times, reported northjersey.com, a USA Today affiliate.

The news outlet, one of the few permitted to attend the funeral service, also reported that Seals’ son, Adrian Junco-Seals, 15, a sophomore at St. Benedict’s Prep in Newark, eulogized his stepfather and called him “a great man in and out of work.”

“He will forever be remembered as an American hero,” Junco-Seals said.

Jersey City Mayor Steven Fulop described Seals as “one of our best officers in the entire department.”

“Those of you working in blue know what that means,” Kelly said. “Joe lost his life fighting evil — gang nonsense, drug wars, shootings and, most of all, hate violence,” the USA Today affiliate reported.

Seals was killed by attackers who proceeded with a deadly attack at a nearby kosher grocery store, killing two workers and a shopper. The attackers were also found dead.

Authorities initially described the shooting as a possibly random crime, but on Dec. 11, officials said surveillance video indicated that the kosher market seemed to be deliberately marked for violence, raising the possibility that the shooting could have been an anti-Semitic attack.

Bishop Joseph C. Bambera of Scranton, Pennsylvania, chairman of the U.S. Conference of Catholic Bishops’ Committee on Ecumenical and Interreligious Affairs, issued a statement late Dec. 13 about the attack, saying it and other such attacks highlight the need to publicly condemn “any and all forms of anti-Semitism whether in thought, word or action.”

“The past has taught us silence and passivity can result in the advancement of the worst crimes humanity can commit,” he added.

In a Dec. 17 statement, Cardinal Tobin said: “Over the past week, we all have been conscious of the power of darkness, which has tried to overshadow us and strangle our hearts. We also are aware of the difference that light makes in triumphing over darkness.”

“Today, we come together as a community and reflect a light so bright that no darkness can vanquish it,” he added. “Our faith in Jesus Christ, the Holy Redeemer, is what will help the family, friends and loved ones of Jersey City Police Detective Joseph Seals to persevere through their grief.”

Prior to the funeral, bagpipers walked in front of the hearse, which was followed by a riderless horse draped in a white blanket embroidered with Seals’ name, badge number and Jersey City Police emblem.

Members of four mosques in Jersey City set up a tent between the church and the funeral home and were offering officers coffee and doughnuts.

“We thought, something simple to show our support,” Yasser Abduaalla, the manager of a nearby mosque, Masjid As-Salam, told The New York Times.

PREVIOUS: More aid from South Florida for Bahamas like an early Christmas present

NEXT: New report shows decreased use of death penalty in U.S.