Migrants, advocates gather at border, call on Biden to ‘save our asylum’ 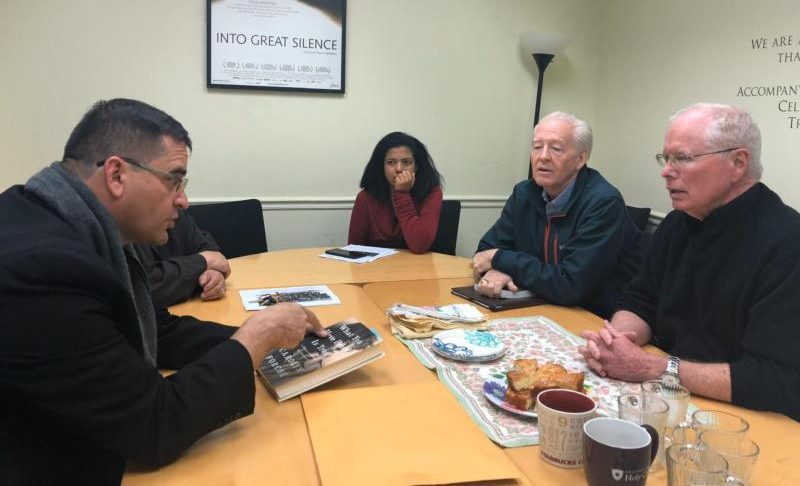 WASHINGTON (CNS) — He was a boy of 11, walking with his older sister by a river when a group of men snatched her as he watched helplessly. He never saw her again. His older brother also was killed in a separate incident.

“What people ask for is that others ask for forgiveness, admit their errors and that they at least say what happened,” said the 51-year-old bishop during a Nov. 8 talk at Georgetown University’s Center for Social Justice in Washington. It was part of a three-day visit with immigrants who hail from his diocese, as well those with ties to El Salvador, which includes parishioners at Georgetown’s Holy Trinity Catholic Church, which has decades-long ties to a parish in the country.

On Dec. 2, he celebrated a Mass at the cathedral in his diocese to remember the Catholic martyrs of Chalatenango and included the portraits of four American churchwomen who were assassinated in El Salvador on that day in 1980. They were Maryknoll Sisters Ita Ford and Maura Clarke, lay missionary Jean Donovan and Ursuline Sister Dorothy Kazel. Their photos were displayed near the altar.

El Salvador may have signed peace accords in 1992, he said, but there’s a lot of hurt that remains because justice has been elusive — in the case of the American churchwomen, in the deaths of many other church members, including the country’s St. Oscar Romero, the death of more than 70,000 civilians and approximately 10,000 disappeared.

“The victims were never heard from,” he said. “And crimes against humanity were instead covered up.”

An amnesty law in El Salvador that prevented prosecution against many war crimes in El Salvador has not only left a “judicial debt” but also great pain in the hearts of many Salvadorans who suffered the death or disappearance of loves ones, he said.

When St. Romero, who also was a victim of a war crime in 1980, was alive, he clamored for information on then 800 disappeared Salvadorans, he said.

Though the church and its organizations have tried to put pressure on the Salvadoran government to release of information that would lead to healing or to pursue the prosecution of crimes, some in the country remain indifferent. Others from “economically powerful sectors” say they want to get past what happened and move forward, he said.

But the crimes of the conflict largely affected the country’s poor and a large number of Catholics, including many in his diocese, he said. Some from other economic classes remain indifferent at best.

Even when students in San Salvador’s premier educational institution devoted to social justice, the Jesuit-run Central American University, who come from upper middle-class and more affluent backgrounds, “go to the museums (to learn about the country’s history), they’re told what happened, they show up, but they don’t engage with the situation,” Bishop Escobar said.

So the plight of the poor, even in death, remains one of injustice.

But the bishop said he can’t help but be touched by those under his spiritual care and who still cry for those they lost decades ago.

Some offer their testimony during Masses, such as the one on Dec. 2. He encourages them to participate in an annual pilgrimage toward the hometown of St. Romero, another victim whose killing has gone unpunished, and commemorations such as the one his diocese will host next May to mark the 40th anniversary of a massacre in which 600 residents of Chalatenango were slaughtered.

He also said the diocese is working on getting the victims who are still alive to talk about the wounds of the past that remain.

At the national level, the Catholic Church in El Salvador suffered the killings of two bishops, 17 or 18 priests, a seminarian, and an unknown number of women religious and lay martyrs, he said.

“I understand the clamor,” Bishop Escobar said. “My diocese, for example, is very martyrial, and we’re in the process of recovering the historical memory of the victims. Catechists, we had hundreds killed. We’re trying to collect all those facts, and we want to have an archive of historical memory of what the people tell us happened to them. They are still suffering.”

In the absence of justice, it’s hard to heal, he said. But there are cases being looked at, adjudicated outside of El Salvador, that may bring about hope when it comes to eventual prosecutions.

One of them involves the case of the six Jesuits, their housekeeper and her daughter, killed on the campus of the Central America University in 1989. Recently, a court in Spain ruled against releasing a former Salvadoran colonel suspected of being linked to the priests’ deaths.

The United States, in 2017, extradited Inocente Orlando Montano to Spain, where he is facing charges for terrorist murder and crimes against humanity, and may be facing a sentence of 150 years, which authorities have asked for.

As with many other crimes involving church members and others in El Salvador, the Salvadoran government has done little to seek charges. But many of the slain Jesuits also were Spanish citizens, so the crime interested Spain.

Montano also was limited from any legal protection politicians and the legal system of El Salvador could offer because he was living in Boston, but he was expelled because he lied on documents to gain entry into the U.S. Spain sought extradition under its universal jurisdiction law, which makes it possible to try crimes there because of their gravity.

Many Salvadorans, including the bishop, are waiting for the outcome of the case.

“We’re waiting to see what happens in that trial, whether it bears any fruit, even though it will never be on a unanimous level” for all the victims of El Salvador’s war, he said. “Many are willing to forgive, but it just can’t be ‘let’s erase this and start again.’ That’s a fallacy. No one forgives a violent crime just like that.”

PREVIOUS: Catholics pledge to have Masses said in support of Sheen beatification